The production of definitive Yugoslavia stamps stopped at the end of 1940, however the production of charity stamps continued into early 1941, shortly before Yugoslavia was invaded at the beginning of World War II.  Most of the pictorial charity stamps of this period were issued for public charities, though there were a couple pictorial issues for philatelic exhibitions.

The Cyrillic and Western inscriptions in the designs are occasionally reversed, or they may be used alternately on different denominations within a set of stamps. 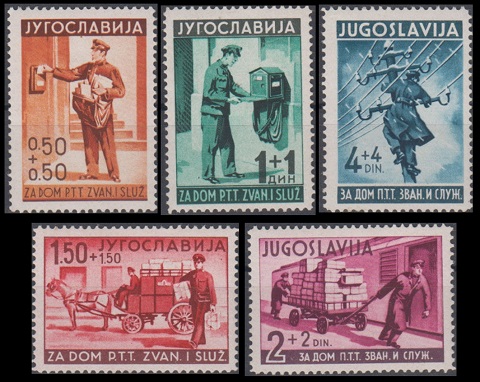 The five surtaxed pictorial Yugoslavia stamps shown above (Sc. #B102-B106) were issued on January 1, 1940.  The surtax was for the construction of a home for postal, telephone, and telegraph (P.T.T.) employees in Belgrade (Serbia). 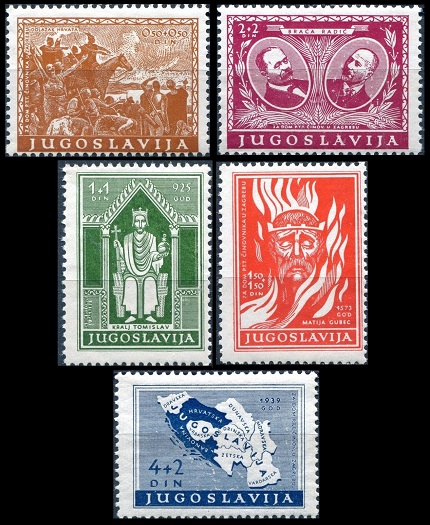 The five surtaxed pictorial Yugoslavia stamps shown above (Sc. #B107-B111) were issued on March 1, 1940.  The surtax was for the construction of a home for postal, telephone, and telegraph (P.T.T.) employees in Zagreb (Croatia). 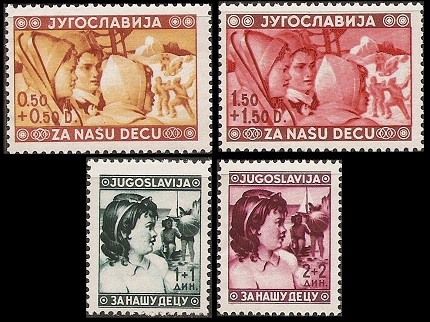 The two common designs feature children playing in the snow and children at the seashore.  The Cyrillic and Western inscriptions on the stamps are "ЗА НАШУ ДЕЦУ / ZA NAŚU DECU", meaning "FOR OUR CHILDREN". 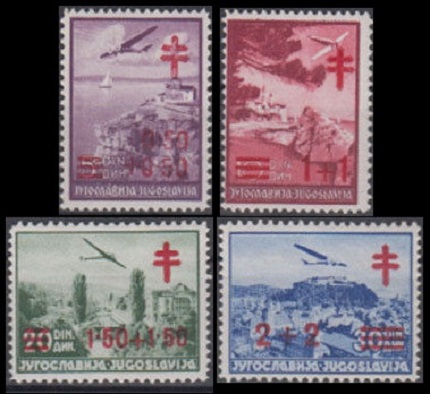 The four overprinted, re-valued, and surtaxed Yugoslavia airmail stamps of 1937, shown above (Sc. #B116-B119) were issued on December 23, 1940.  The surtax benefited the Fight against Tuberculosis. 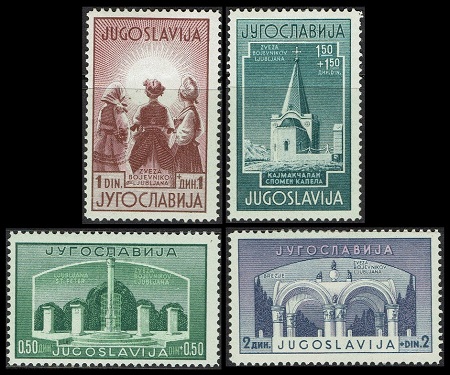 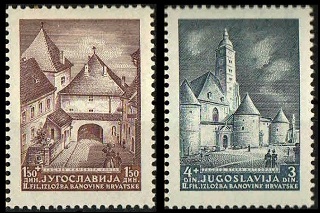 The two surtaxed pictorial stamps shown above (Sc. #B124-B125) were issued on March 16, 1941 for the 2nd Philatelic Exhibition of Croatia, held in Zagreb. 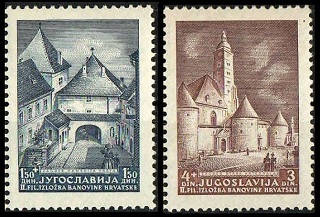 The two surtaxed pictorial stamps shown above (Sc. #B126-B127) were issued in April 1941 for the Regional Philatelic Exhibition, held in Slavonski Brod.

The designs are the same as the previous issue, though the colors are reversed.

There are scarce printing and perforation varieties of both the philatelic exhibition sets shown above.  Please refer to the major catalogs for details.


Return to Yugoslavia Stamps from
Charity Stamps of 1940-1941