The portrait definitive Yugoslavia stamps of 1935 to 1940 picture the very young King Peter II.  Pictorial special-event and commemorative postage stamps of Yugoslavia also appeared during this period.  Unfortunately, for the young monarch and his subjects, the Kingdom of Yugoslavia would vanish by early 1941. 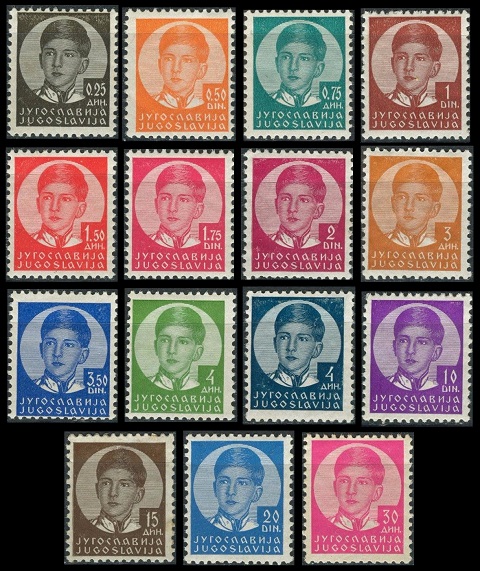 The fifteen portrait definitive Yugoslavia stamps shown above were issued between 1935 and 1936.  They are typographed and perforated 13 x 12 1/2. 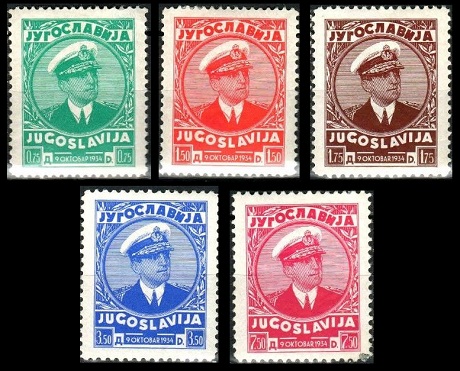 The five special event stamps shown above (Sc. #131-135) were issued on October 9, 1935 to commemorate the 1st Anniversary of the Death of King Alexander I. 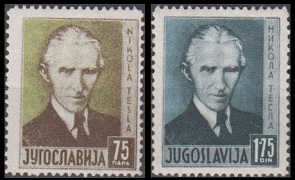 Nicola Tesla (1856-1943) was an inventor, electrical engineer, and physicist, born in Croatia to Serbian parents.  He is best known for his work with alternating current systems, working alongside Thomas Edison (1847-1931) during the 1880's.  Nicola Tesla became a naturalized American citizen in 1891.  During his lifetime, he achieved more than 278 patents (in 26 countries) for his inventions.

After his death, on January 10, 1943, New York Mayor Fiorello La Guardia (1882-1947) read a public eulogy for Tesla, and he was given a state funeral at the Cathedral of St. John the Divine in New York City.  Today, his ashes are contained inside of a gold sphere in the Nicola Tesla Museum in Belgrade, Serbia.

Nicola Tesla is regarded as a national hero in both Serbia and Croatia.  And, of course, the modern American-made Tesla electric automobiles are named after Nicola Tesla!

The two commemorative Yugoslavia stamps shown above (Sc. #138-139) were issued on July 1, 1937 to celebrate the 16th Anniversary of the Little Entente.

The Little Entente was a 1921 alliance between Yugoslavia, Romania, and Czechoslovakia designed to prevent any further aggression against them from Austria or Hungary.

The common design features the Arms of Yugoslavia, Greece, Romania and Turkey.

The Balkan Entente was a 1934 alliance between Greece, Turkey, Romania, and Yugoslavia.  It was designed to ensure the geographical and political integrity of the region between the signatory parties.

The fifteen portrait definitive Yugoslavia stamps shown above were issued between 1939 and 1940.  They are typographed and perforated 12 1/2. 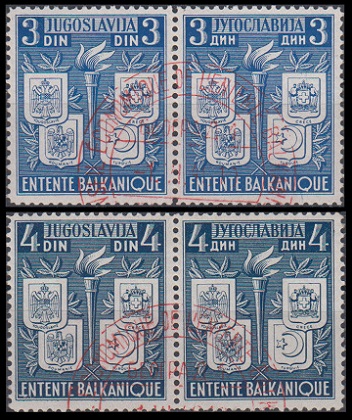 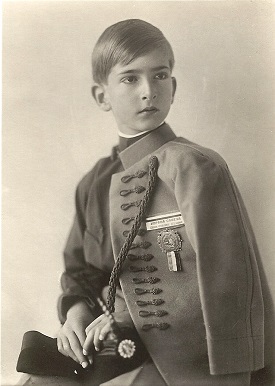 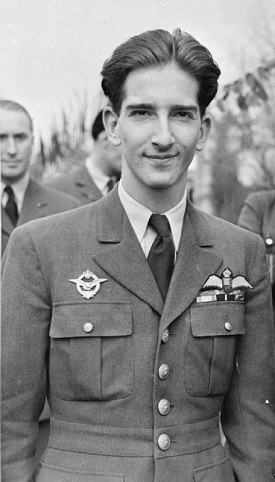 Unfortunately for the young king, who was declared of-sufficient-age to rule the kingdom on his own on April 8, 1941, his very brief reign was about to end.  Germany (and other Axis armies) invaded Yugoslavia on April 6, 1941, and the Yugoslav government was forced to surrender on April 17, 1941.  The former states of the Kingdom of Yugoslavia then became Nazi German Protectorates.

The royal family, along with elements of the government, fled into exile in Great Britain.  After World War II, the new Communist government of Yugoslavia abolished the monarchy, and the royal family was never allowed to return.  King Peter II moved to the United States, where he lived for the remainder of his life.

In January 2013, the remains of King Peter II and his family were finally repatriated to Serbia, and a state funeral was held for them.  The last members of the ruling Karađorđević Dynasty are now buried in the Royal Mausoleum, St. George's Church, Oplenac, Serbia. 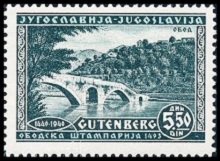 The 5.50 D. denomination Yugoslavia stamp shown above (Sc. #159) was issued on September 29, 1940 to publicize the Zagreb Philatelic Exhibition and to commemorate the 500th Anniversary of Johann Gutenberg's Invention of Printing, using Movable Type.

The design features a view of the Bridge at Obod in Montenegro.  The first printing press in the Yugoslav area was located at Obod in 1493.