Many of the surtaxed Yugoslavia stamps, issued between 1933 and 1937, feature members of the royal family.  Three sets of charity stamps commemorating the Sokol Movement in Yugoslavia were also issued during this period.

All of the charity stamps issued during this period are inscribed for the Kingdom of Yugoslavia.  The Cyrillic and Western inscriptions in the designs are occasionally reversed, or they may be used alternately on different denominations within a set of stamps. 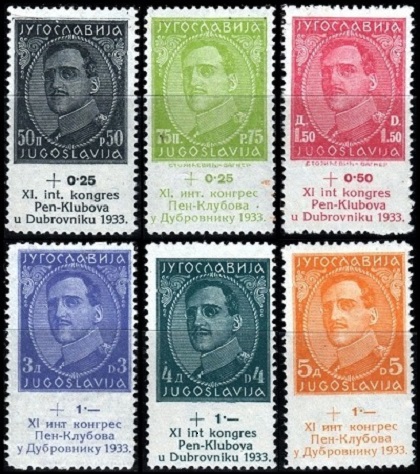 The six surtaxed Yugoslavia stamps shown above (Sc. #B32-B37) were issued on May 25, 1933 for the 11th International Congress of Poets, Editors, and Novelists (P.E.N.) Clubs, held in Dubrovnik.

The common design features the definitive postage stamp types of 1931-1934, each with a bottom label indicating the surtax.  The surtax on these stamps benefited the P.E.N. Club of Dubrovnik.

The three commemorative Yugoslavia charity stamps shown above (Sc. #B40-B42) were issued on June 1, 1934 to celebrate the 20th Anniversary of the Sokol Federation (Gymnastics Clubs) of Sarajevo.

The common design features an eagle soaring over a city.

The three commemorative Yugoslavia charity stamps shown above (Sc. #B43-B45) were issued on June 1, 1934 to celebrate the 60th Anniversary of the Sokol Federation (Gymnastics Clubs) of Zagreb.

The common design features a gymnast and an eagle.

The common design features a portrait of Queen Mother Marie.

Marie of Yugoslavia (1900-1961) was the wife of King Alexander I of Yugoslavia (Lived: 1888-1934, Reigned: 1921-1934).  She had three sons and was considered an example of ideal motherhood in the Kingdom of Yugoslavia.  She spent most of her public life supporting charities, and she has been widely regarded as being one of the greatest royal patrons of public charity. 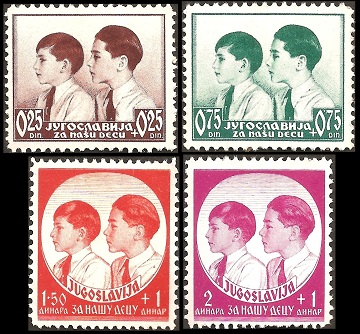 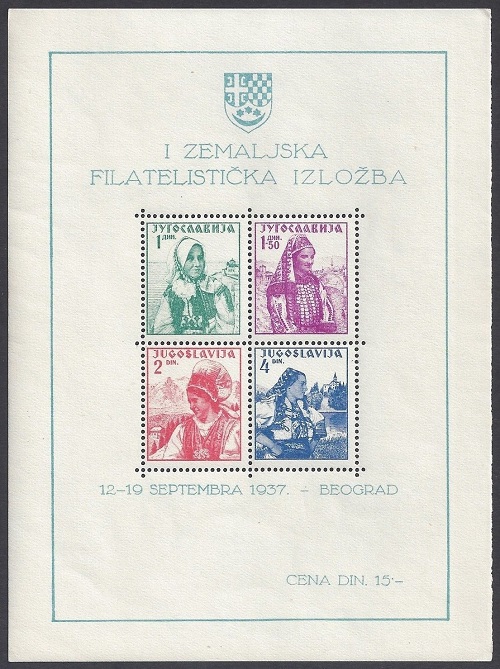 The designs of the four pictorial stamps in the souvenir sheet feature women in regional costumes.


Return to Yugoslavia Stamps from
Charity Stamps of 1933-1937

The two Yugoslavia charity stamps shown above (Sc. #B38-B39) were issued on June 28, 1933 to celebrate the 60th Anniversary Meeting of the National Sokols (Sports Associations) in Ljubljana on July 1.

The common design features a portrait of Crown Prince Peter.

The postal tax was for the Red Cross.  The use of these stamps was obligatory on letter mail during Red Cross Week, September 17-23, 1933.

The common design features a mother and her children.

The postal tax was for the Red Cross.  The use of these stamps was obligatory on letter mail during Red Cross Week, September 20-26, 1936.

The design features a portrait of Dr. Vladen Djordjevic (1844-1930), the noted Serbian physician, writer, and politician.

The common design features a portrait of Prince Regent Paul.