The first Yugoslavia stamps, issued for the purpose of raising extra money for charitable purposes, appeared at the beginning of 1921.

These stamps are actually postage stamps, intended for use by postal patrons for various types of mail.  Many issues are also commemorative stamps, as they honor famous people, places, and events, in addition to their fund-raising purposes.

These types of stamps feature a "value added amount" or "surtax amount" in addition to the postal denomination of the stamp.  Yugoslavia utilized the added amounts on these postage stamps to raise money for national organizations, public events, and public charities. 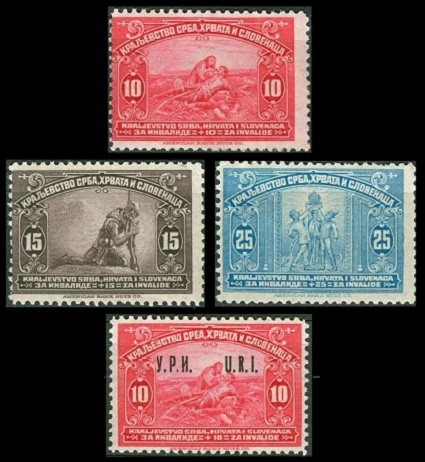 The three pictorial Yugoslavia stamps shown above, at the top and middle of the image (Sc. #B1-B3), were issued on January 30, 1921.  The stamps sold for double their face value, with the excess amount being for the benefit of crippled soldiers.

The overprinted pictorial charity stamp shown above, at the bottom of the image (Sc. N/L), was never officially issued.

Five-hundred-thousand of these stamps were overprinted "У.Р.Н. / U.R.I." and given to the Uprava Ratnih Invalida (English: Society for Wounded Invalids).  The benevolent society sold the stamps for 2 Dinars each.  These overprinted stamps were NOT valid for postage, though some of them did erroneously pass through the mails. 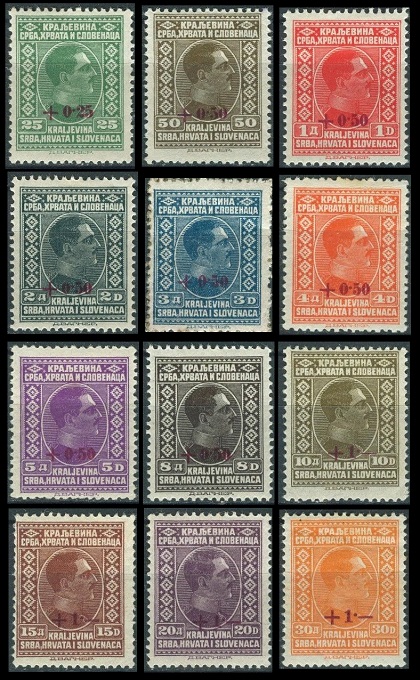 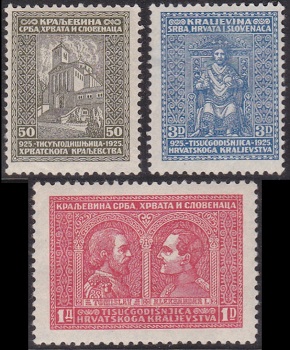 The three surtaxed commemorative charity stamps shown above (Sc. #B17-B19) were issued on November 1, 1929 to celebrate the 1,000th Anniversary of the Kingdom of Croatia.

The surtax was donated to a fund to create a War Memorial Cemetery and Monument in France, dedicated to the Serbian soldiers that died there during World War I.

The Kingdom of Croatia existed from 925 to 1102, when, due to a succession crisis, it merged with the Kingdom of Hungary.  The merger was considered a "Personal Union" between the two monarchies.  This relationship continued, to some extent, until after World War I, when Croatia became part of the Kingdom of the Serbs, Croats, and Slovenes (Yugoslavia). 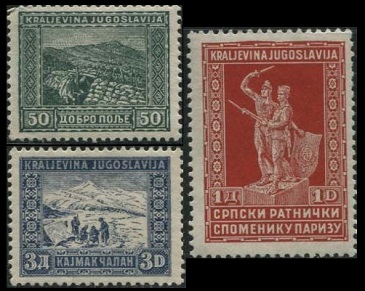 The three surtaxed pictorial Yugoslavia stamps shown above (Sc. #B20-B22) were issued on April 1, 1931.  The surtax was donated to the fund for the Serbian War Memorial Cemetery and Monument in France. 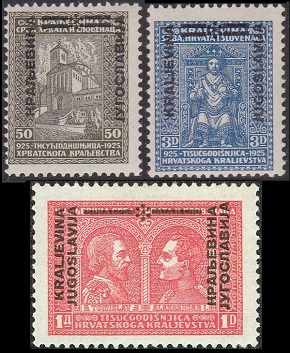 The overprinted Yugoslavia charity stamps of 1929 shown above (Sc. #B23-B25) were issued on November 1, 1931.  The surtax was donated to the fund for the Serbian War Memorial Cemetery and Monument in France. 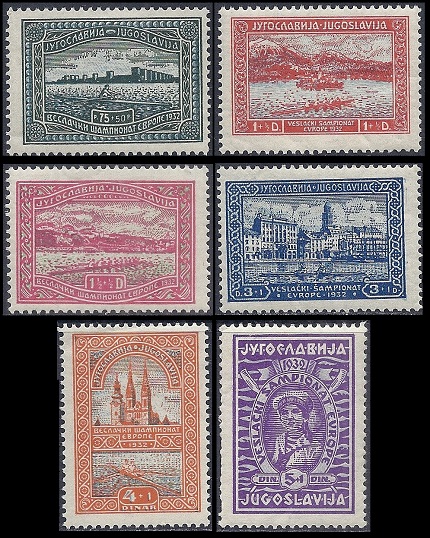 The six surtaxed pictorial Yugoslavia stamps shown above (Sc. #B26-B31) were issued on September 2, 1932 to publicize the European Rowing Championship Races in Belgrade.  The surtax was donated to the event, which was won by the Yugoslavian racing team.


Return to Yugoslavia Stamps from
Charity Stamps of 1921-1932