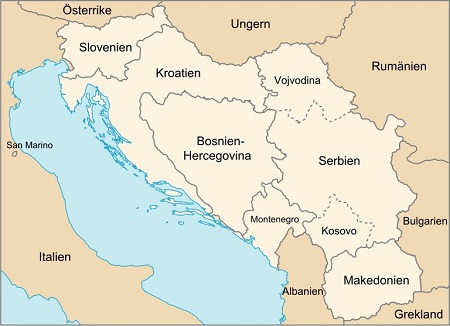 Kingdom of Yugoslavia stamps came into being, from the combination of the former Balkan Peninsula territories of the Austro-Hungarian Empire and the independent Kingdom of Serbia, in the aftermath of World War I.

The new kingdom, for the first few years of its existence, was called the Kingdom of Serbs, Croats and Slovenes, though the word Yugoslavia was used interchangeably.  The new nation was made up of the former states of Slovenia, Croatia, Bosnia & Herzegovina, Serbia (with Vojvodina, Kosovo, and Vardar Macedonia), and Montenegro.  The Serbian House of Karađorđević became the ruling-house of the new kingdom.  The Kingdom of Serbs, Croats, and Slovenes was officially recognized as a sovereign nation by the international community on July 13, 1922.

The Kingdom of Serbs, Croats and Slovenes was officially renamed to the Kingdom of Yugoslavia in 1929, and the first definitive postage stamps, inscribed "JUGOSLAVIA", appeared in 1931.

During World War II, Yugoslavia was invaded and occupied by both Italy and Germany.  Wartime occupation stamps were issued, at various times, between 1941 and 1945.  It is estimated that about 1.8 million Yugoslavians perished, during the wartime occupation of their country.

In November 1945, King Peter II, still in exile, was deposed, and the Federal People's Republic of Yugoslavia was declared.  Marshal Josep Broz Tito (1892-1980), who had been the leader of the Yugoslav partisans during the wartime occupation, became the head-of-state of the new Communist republic.

Though he was an authoritarian figure, Tito was widely recognized as a benevolent leader, maintaining the unity and peaceful coexistence of the "republics" within the Yugoslavian federation.  He remained the head-of-state of Yugoslavia, until his death in 1980.

Collecting Yugoslavia stamps can provide years of enjoyment for any stamp collector.  The more modern pictorial stamps of Yugoslavia also provide a wealth of material for the thematic stamp collector, as well.

Links to pages, containing information about the philately and history of Yugoslavia, will eventually be found at the top of the right column.

For Bosnia and
Herzegovina

Provisional Stamps
For Croatia and
Slavonia