Official Wurttemberg stamps for use by the State Authorities continued in use by the Republic of Wurttemberg, after the end of World War I.

These state or ministerial official stamps were issued for use on official correspondence between state government offices.

The 25 Pf. exists without the watermark. It is scarce in mint condition and very rare in used condition. 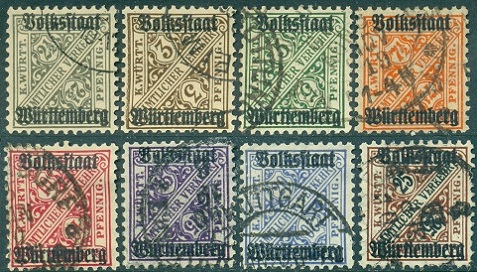 Following the abdication of King Wilhelm II of Wurttemberg after the end of World War I, the "People's State" or Republic of Wurttemberg came into existence.

The current definitive state official stamps of the kingdom were overprinted "Volkstaat / Wurttemberg" or "People's State of Wurttemberg" at the top and bottom. They are all shown in the images above (Mi. #258-71, Sc. #O150-64). 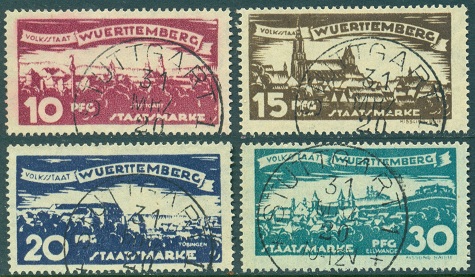 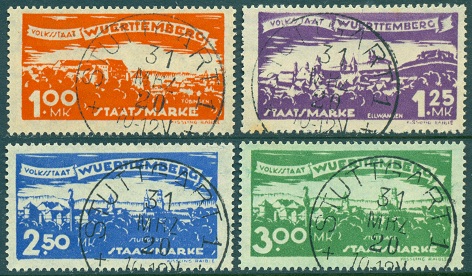 The set of ten pictorial state official stamps, shown above (Mi. #272-81, Sc. #O166-75), were issued on March 25, 1920. The designs feature views of Stuttgart - the capitol, Ulm, Tubingen, and Ellwangen. They were printed on paper that was watermarked circles.

The stamps shown in the scans above are obviously favor-canceled.  Actual postally used examples are expensive.

State official stamps of the People's Republic of Wurttemberg were discontinued after 1920, when it became a member state within the German Weimar Republic.

Today, Wurttemberg is part of the state of Baden-Wurttemberg, within the Republic of Germany.