Official Wurttemberg stamps for use by the State Authorities were first issued in 1881. With the exception of a few stamps issued by Bavaria, for use by railway officials, Wurttemberg is the only German state that issued a regular series of official stamps. 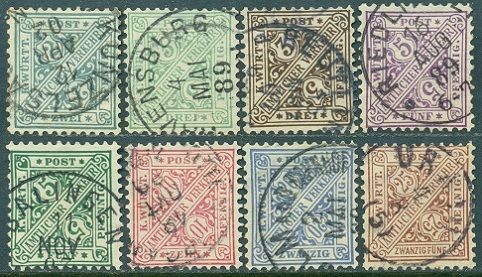 The first state official stamps were issued between 1881 and 1902, and they were all printed on unwatermarked paper. During this time there were color changes to some of the issues, and new denominations were added, as well.

In 1906, the current state official stamp issues were overprinted to commemorate the 100th Anniversary of the establishment of the Kingdom of Wurttemberg, as shown above (Mi. #217-26, Sc. #O109-18).

Wilhelm II (1848-1921) was the fourth king of Wurttemberg and the reigning monarch at the time of the 1906 anniversary.

Between 1906 and 1916, a new series of definitive official stamps was issued. All of these stamps were printed on paper with a multiple circles and crosses watermark.

The ten commemorative stamps shown above (Mi. #241-50, Sc. #O136-45) were issued in 1916, to commemorate the 25th Anniversary of the Reign of King Wilhelm II of Wurttemberg. These stamps were printed on unwatermarked paper.