Between 1869 and 1873, Wurttemberg stamps underwent a transition.  The typographic embossing method of production, used for the coat of arms definitive stamps, was found to be very expensive. In 1868 the Government decided to abandon it, in favor of ordinary typographic printing.

The new stamps still featured a white numeral of value in the middle, but the dimensions of the stamps were changed to conform to the stamp sizes used by other Germanic kingdoms of the time. 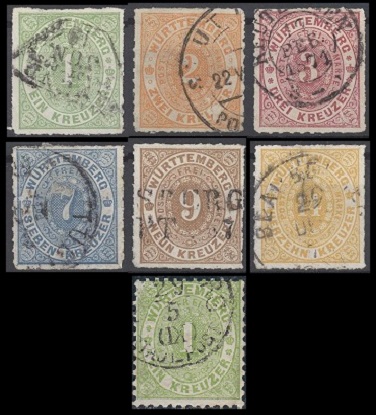 In 1874, the government purchased and implemented a new perforating machine, having a gauge of 11 1/2 x 11.  Some of the 1 Kr. stamp sheets were perforated with this gauge, before this issue was retired in 1875. This stamp is shown above, at the bottom (Mi. #43, Sc. #54). Other denominations perforated in this manner are fraudulent. 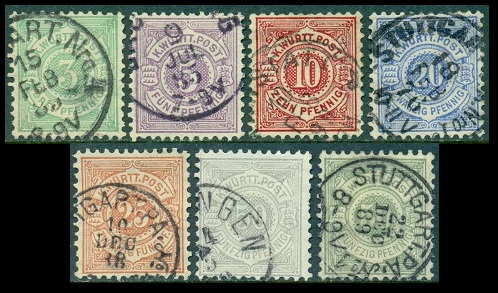 The seven new definitive postage stamps shown above were issued between 1875 and 1878.  The stamps are typographed and perforated 11 1/2 x 11. 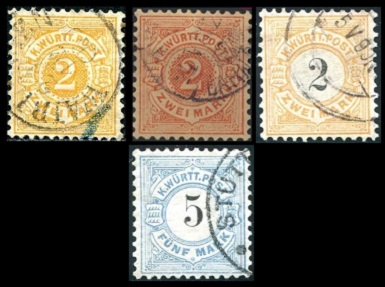 The four new high-denomination definitive postage stamps shown above were issued between 1875 and 1883.

The 2 Mk. (Yellow) and the 2 Mk. (Vermilion on Buff) high-denomination Wurttemberg stamps were not sold to the public, but they were affixed to articles by the postal clerks. They had "Unverkauflich" or "not for sale" printed on the backs of them. Mint examples do exist though. Both of these stamps are very scarce, mint or used.

The 5 Mk. denomination stamp was used primarily for telegraphs, though it was available for postal use. 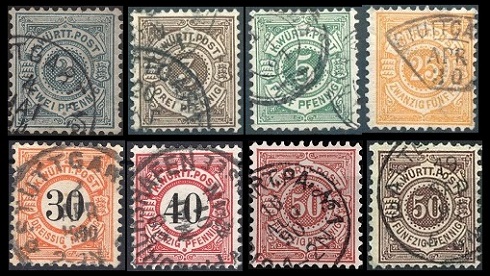 The eight new definitive Wurttemberg stamps shown above were issued between 1890 and 1900.   These stamps feature new denominations and colors.

On April 1, 1902, the regular letter postage definitive Wurttemberg stamps were replaced by those of the German Empire. However, the Wurttemberg Official stamps for the Communal and State authorities continued in use through 1923.