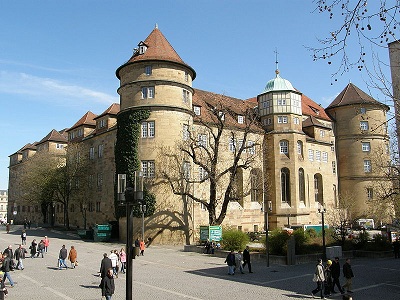 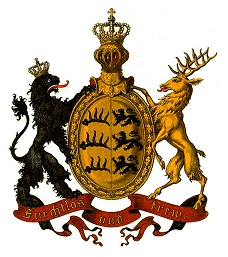 Wurttemberg stamps, in many ways, parallel those of their neighbor Bavaria. The early stamps of Wurttemberg, while very simple in design, offer many opportunities for the philatelic specialist.

Wurttemberg had existed as a Duchy, in one form or another, since the 13th Century, but the state did not become a Kingdom until the aftermath of the Napoleonic wars, when the former Holy Roman Empire was broken up into numerous kingdoms.

The Kingdom of Wurttemberg existed from 1806 to 1918. The royal coat of arms is shown in the image at the right. 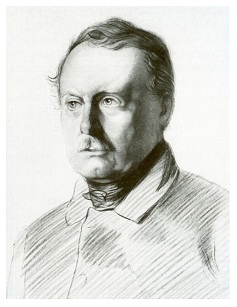 King Wilhelm I, who reigned from 1816-1864, took up the task of implementing a constitution for the young kingdom. The new constitution, passed in 1819, remained in effect until 1918. A drawing of King Wilhelm I is shown at the left.

For the most part, the reign of Wilhelm I was marked by peace and tranquility. Great attention was paid to improving education, agriculture, manufacturing infrastructure, and monetary reform for the kingdom. Extensive development of the railway systems of Wurttemberg, during the reign of Wilhelm I, contributed greatly to trade with other Kingdoms and enabled the Wurttemberg economy to thrive. 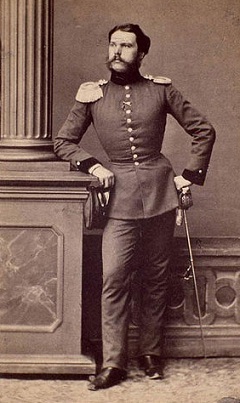 In the duel between Austria and Prussia for the control of the Germanic regions of Europe, Wilhelm I had taken the Austrian side. In 1866, Wurttemberg took up arms on behalf of Austria, in the Austro-Prussian War. Prussia then occupied the northern part of Wurttemberg, and a peace treaty was negotiated in August 1866. Wurttemberg paid Prussia an indemnity of eight million Gulden and agreed to an alliance with her conqueror.

In 1870, the Franco-Prussian war began. Though Wurttemberg maintained an antagonistic attitude towards Prussia, the kingdom shared in the national enthusiasm which swept over Germanic kingdoms, and its troops took an active part in Prussian operations during the war.

In 1871 Wurttemberg became a member of the new German Empire. Though they were a client kingdom within the Empire, Wurttemberg retained control of her own postal services, telegraphs, and railways.

In 1869, when most of the Germanic kingdoms, with the exception of Bavaria, were handing their postal systems over to that of the North German Postal Union and then that of the German Empire, a new definitive series of Wurttemberg stamps was issued. They would continue in use until after 1900, and the Official Wurttemberg stamps would continue in use until the 1920's.

Though Karl I was married, he had no children. He and Queen Olga spent very little time together. It has been speculated that he was homosexual, and his long associations with male companions, during his reign, could have contributed to the absence of an heir. Karl I died at Stuttgart in October of 1891, and he was succeeded as King of Wurttemberg by his sister's son, Wilhelm. King Karl I and Queen Olga are buried in the Old Castle in Stuttgart, shown at the top of this page. 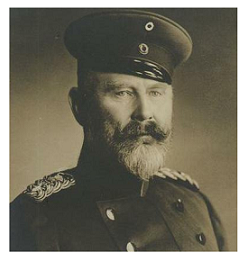 King Wilhelm II, shown in an old portrait at the left, reigned from 1891 to 1918. Despite living in a landlocked kingdom, William II was a ship enthusiast. He had a vision of a German fleet reaching deep into the country, through its rivers. The king was instrumental in the establishment of the Royal Yacht Club of Wurttemberg in 1911 on Lake Constance.

In 1918, Wilhelm I was deposed from the throne, along with the other German rulers. Considered to be a popular monarch, he was bitter to find he received less support than he had anticipated. He had the habit of walking his two dogs in public parks in Stuttgart, without bodyguards, being greeted by his subjects with a simple Herr König. Wilhelm finally abdicated on November 30, 1918.

As Germany underwent violent revolution near the end of World War I, the Kingdom of Wurttemberg transformed from a monarchy to a democratic republic peacefully, and its borders and internal administration remained unchanged. Wurttemberg became a member state of the Weimar Republic in 1922, and about a year after that, the stamps of Wurttemberg were replaced by those of Germany.

Despite the many financial crises that affected Germany during the 1920's, the economic development of Wurttemberg proceeded better than in many other German states and its capital of Stuttgart became a regional center of finance and culture. 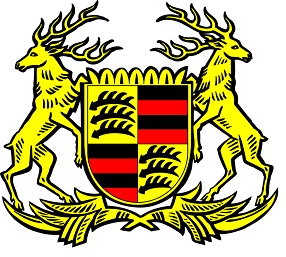 In 1922, the royal coat of arms of Wurttemberg was replaced with a new one, as shown at the right. Part of the new coat of arms was adopted as a trademark by a local automobile company .... Porsche!

I realize that Württemberg is correctly spelled, in German, with an umlaut over the "u". Unfortunately, the use of special characters, with the keyword analysis tool provided by my service provider, is not allowed.

My seed-word for this page is "Wurttemberg stamps". Rather than just remove the umlauts from the seed-words and leave the other ones, I have removed them from all occurrences of the word Württemberg on this page, for uniformity. This will be the case for all the other Württemberg pages in this section, as well.