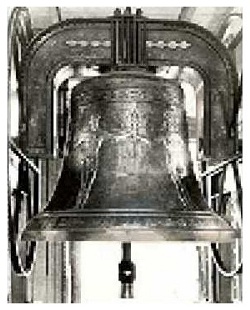 The West Berlin Freedom Bell, or Freiheitsglocke in German, was a gift from Americans to the city in 1950. The 15 ton bell was forged as a symbol of the fight for freedom against Communism in Europe. The design was modeled after the American Liberty Bell in Philadelphia. The Freedom Bell is located in the tower of Rathaus Schöneberg, the former city hall of Berlin, as shown in the photograph at the left.

To this day, the Freedom Bell is rung daily at noon, and at midnight on Christmas Eve and on News Year's Eve. 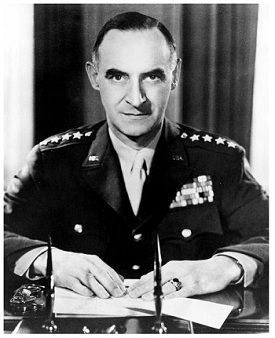 The plan to give West Berlin such a bell was taken by the "Crusade for Freedom", a movement sponsored by the National Committee for a Free Europe, the organization that operated "Radio Free Europe". The campaign was launched by General Dwight Eisenhower on Labor Day in 1950. The chairman of the campaign was General Lucius D. Clay, shown in the photograph at the right, who became known as the "father of the Berlin airlift". The purpose of the campaign was to offer all Americans an opportunity to play a personal part in a demonstration of the "free world's determination to resist Communist aggression".

The bell was forged at the British foundry of Gillet and Johnston, then it was delivered to New York, from where it toured 21 American cities. People in every state were encouraged to sign a Declaration of Freedom. Sixteen million signatures from American citizens were collected, and they are now enshrined in Berlin.

The bell was then sent to West Berlin, and it was permanently installed in the city hall (Rathaus Schöneberg) on United Nations Day, October 24, 1950. More than 400,000 Berliners, with some 100,000 of them having crossed over from East Berlin, filled the square before the city hall to witness the dedication ceremonies. The mayor at that time, Ernst Reuter, declared that Germany "will never rest or relax until freedom will shine over the countries of Eastern Europe that are at present forced to live in slavery".

Here is an AUDIO FILE (MP3) of the ringing of the Berlin Freedom Bell, accompanied by a reading from the "Declaration of Freedom" (in German). The file is from www.radiomuseum.org. 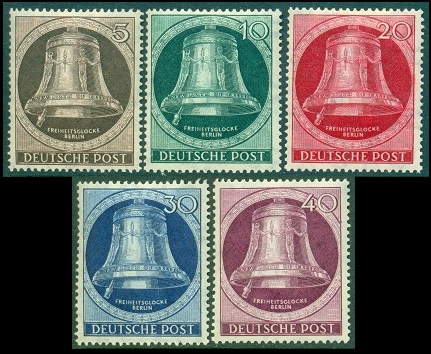 The five stamps shown above (Mi. #75-79, Sc. #9N70-74) were issued between May and August of 1951 to celebrate the hanging of the Freedom Bell in the tower of the Rathaus Schöneberg.

These beautifully engraved stamps feature a sharply detailed depiction of the Freedom Bell, within an ornate circular border. Beneath the bell is the inscription "FREIHEITSGLOCKE / BERLIN".

On this first issue, the bell's clapper is to the left, and there is no designer name below the bottom edge of the stamp design. 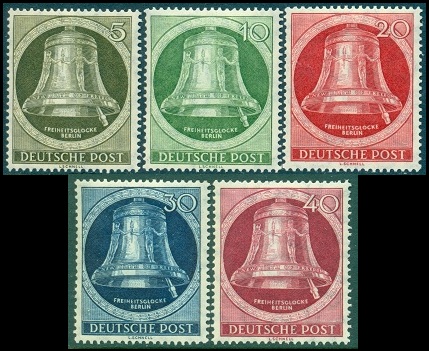 The re-engraved stamps now have the bell's clapper to the right, and the designer's name appears below the bottom edge of the stamp design. 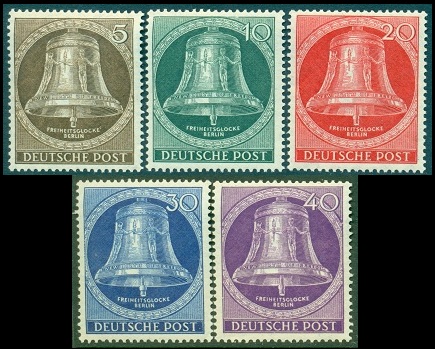 These new stamps now have the bell's clapper in the middle (at rest), and there is, once again, no designer name below the bottom edge of the stamp design. 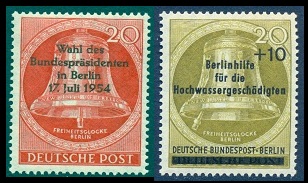 The two stamps shown in the image above were the last two issues to utilize the 1951-1952 Freedom Bell designs.


The 20 Pf. + 10 Pf. stamp, shown at above right (Mi. #155, Sc. #9NB17), was issued on August 9, 1956. It incorporates the original Freedom Bell design of early 1951, with the bell's clapper to the left, but the color has been changed. The overprint reads: "Berlinhilfe für die Hochwassergeschädigten", or "Berlin Aid for Flood Victims". The 10 Pf. surtax was donated to a fund for flood victims.

Notice that the 1956 Freedom Bell stamp issue has the words "DEUTSCHE POST" at the bottom of the stamp obliterated and replaced with "DEUTSCHE BUNDESPOST-BERLIN". By the time this stamp was issued in 1956, the city of West Berlin had been legally incorporated into the Federal Republic of Germany (West Germany). 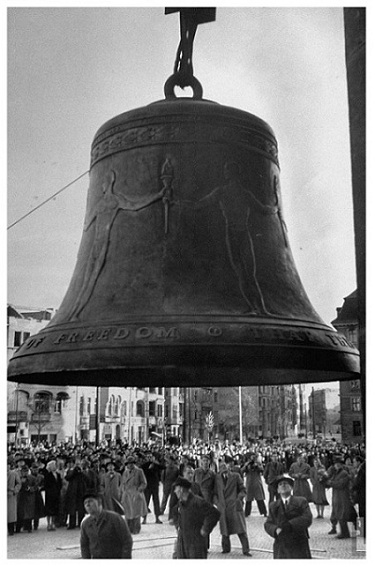 Just to give one an idea of the size of this 15 ton bell, I have provided the image above, which is the detail from an old Life Magazine cover. This was taken, before the bell was raised and mounted in the tower of the Rathaus Schöneberg in West Berlin. As one can see, it exponentially dwarfs the comparable sizes of the people standing underneath and adjacent to the bell.