One of the major achievements of the Weimar Republic was the development of commercial aviation through its rigid airships. The most famous of these airships was the Graf Zeppelin LZ-127, "Count Zeppelin" in English, which would become the first successful intercontinental passenger aircraft. The code LZ-127 stands for "Luftschiff Zeppelin #127". 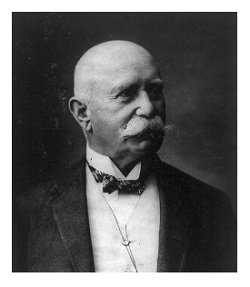 The airship was named after Ferdinand Graf von Zeppelin (1838-1917), shown in a 1910 photograph at the left. Count Zeppelin was a general in the army, later an aircraft manufacturer, and the founder of the Zeppelin Airship Company.

In 1863, Count Zeppelin took leave from the army, to travel to the United States, as an adviser to the Union Army. During his stay in America, he made his first ascent in a balloon, at St. Paul, Minnesota. It was this experience that was the incentive for his later experiments in aeronautics. From the 1880's, and after his retirement from the military in 1890, Count Zeppelin was completely preoccupied with the idea of navigable balloons.

Count Zeppelin eventually developed his rigid airship idea, as follows: a rigid aluminum framework, covered in a fabric envelope; separate internal gas cells, each being free to expand and contract; and a modular frame, allowing for the addition of sections and gas cells, controls, engines, and a gondola, all rigidly attached. In August 1895, Zeppelin received a patent for his new rigid airship design, and on July 2, 1900, Zeppelin made the first flight with the LZ-1 over Lake Constance, near Friedrichshafen, in Southern Germany.

After some initial failures, further successful flights sparked public interest in the development of the airships, and through public donations and lotteries, Count Zeppelin was able to raise millions of Marks for his work. With the funds, he later founded the Zeppelin Airship Company. Though originally developed for military use, by 1909, the airships were being used for commercial flights as well. Between 1909 and 1914, these rigid airships had transported 37,250 passengers on 1,600 flights, without incident. 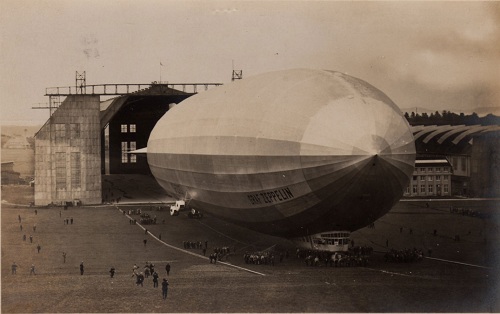 LZ-127 Graf Zeppelin leaving the hanger in Friedrichshaven
for its First Flight on September 18, 1928

The airship LZ-127 Graf Zeppelin was the largest, most highly developed, most luxurious airship of the Weimar Republic, when it was completed in 1928. It was somewhat of a high-speed, floating, luxury ocean-liner of its day. Only the wealthy could afford passage on the Graf Zeppelin, especially on international flights, but it was still symbolic of the golden days of the Weimar Republic and of the Worldwide fascination with long distance air travel.

As an example of how the Graf Zeppelin caught the imagination of the World, many countries issued commemorative airmail postage stamps publicizing its flights, and flown covers carried on all the airships were widely collected, despite the hard financial times of the Great Depression.

Being the pride of the Weimar Republic, the airship Graf Zeppelin had a total length of 776 ft. and a total volume of 3,700,000 cubic ft. It was powered by five 550 horsepower engines that could burn either "Blau" gas or gasoline. Blau gas was an artificial fuel, similar to propane, invented by Dr. Hermann Blau. The airship had a maximum speed of 80 miles per hour or 70 knots, and a total maximum thrust of 2,650 horsepower. At maximum capacity, the fuel tank provided 67 hours of cruising. Using both gasoline and "Blau" gas could give it a total of 118 hours of cruising. 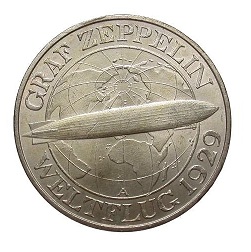 From its first flight in September 1928 until its last flight in June 1937, the airship Graf Zeppelin saw nearly nine years of uninterrupted service, totaling nearly two years in the air, and it traveled over a million miles. Of its 590 flights, 144 of them were ocean crossings, which carried a total of 13,110 passengers, with a perfect safety record.

The seventh flight of the Graf Zeppelin was its first Atlantic crossing. Thereafter, it made regularly scheduled flights across the South Atlantic to Brazil, one round-the-world tour, a polar expedition, two round trips to the Middle East, and a few tours within Europe. A German 3 Mark coin of the Weimar Republic, commemorating the 1929 round-the-world flight of the airship, is shown at the upper left. 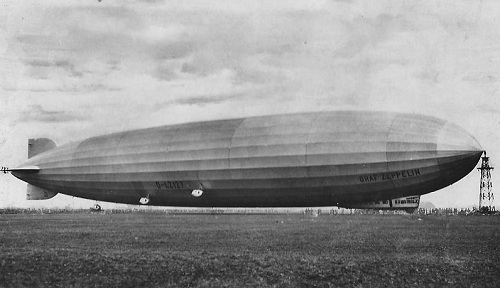 The Commander of the airship LZ-127 Graf Zeppelin, on its first trans-Atlantic flight in 1928, was Dr. Hugo Eckener. The airship left Friedrichshaven on the morning of October 11, 1928 and arrived at Lakehurst Naval Air Station, New Jersey on October 15, after the 111 hour flight. In a testimonial to the Weimar Republic and to the marvelous airship, a ticker tape parade was given through downtown New York for the crew and they were also invited to visit the White House.

This was not Eckener's first oceanic crossing though. Four years earlier, in October 1924, he had delivered the Graf Zeppelin's sister ship, the LZ-126 to its buyer, the U.S. Navy. The LZ-126 was later renamed to the U.S.S. Los Angeles.

By the mid-1930's though, regular passenger airplanes had become capable of trans-oceanic travel. They could carry more passengers and were much cheaper. With the airship Hindenburg disaster in 1937, the public's confidence in the hydrogen filled airships was irreparably damaged, and all commercial airship service ended. About a month after the Hindenburg disaster, the LZ-127 was turned into a museum. With the outbreak of World War II, in March 1940, Hermann Göring ordered that the airship be dismantled, and that its parts be recycled for the war effort.

Return to Weimar Republic from
Graf Zeppelin - A Brief History