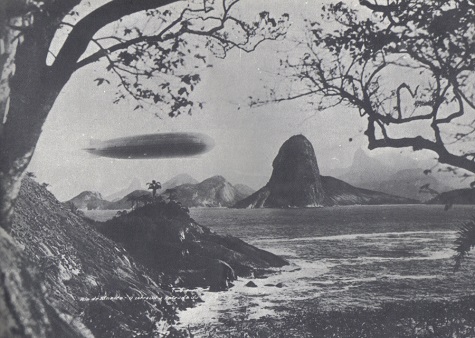 The designs of these two stamps are identical to those issued in 1928, with the exception that these have "1. SUDAMERIKA / FAHRT" or "First South America Flight" imprinted in the upper left field adjacent to the image of the airship.

These two stamps exist with both upright and sideways network watermarks.  The prices of the two varieties aren't very different.

This first flight left Friedrichshafen on May 18, 1930.  It then stopped in Seville, Spain, before continuing on to South America.  The Graf Zeppelin arrived in Recife, Brazil on May 22, 1930, after which it proceeded on to Rio de Janeiro, Brazil.  From there the airship traveled north to Lakehurst, New Jersey, then returned to Seville, Spain and to Friedrichshafen, Germany.

This flight led to the airship's regularly scheduled passenger, mail, and freight service between Germany and Brazil, which continued until May 1937. 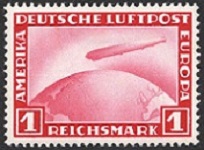 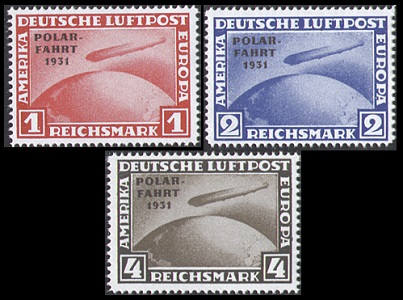 The designs of these three stamps are identical to those of the regular Graf Zeppelin airmail stamps issued by the Weimar Republic between 1928 and 1931, with the exception that these have "POLAR - / FAHRT / 1931" or "Polar Flight 1931" imprinted in the upper left field adjacent to the image of the airship.

The polar flight of the airship Graf Zeppelin was actually a research trip.  It had been planned by Count Zeppelin many years earlier, but the trip was postponed, due to World War I.  The reason for the planned trip was to test the performance of the airship under Arctic conditions, and this was the primary purpose for the original construction of the airship LZ-127 Graf Zeppelin.

It was decided to make a rendezvous with a surface vessel to be funded by exchanging souvenir mails between the vessel and the airship. Around 50,000 cards and letters were collected from around the world, weighing a total of 661 pounds. The rendezvous vessel for the Arctic trip, the USSR icebreaker "Malygyn" carried another 265 pounds of cards and letters for the exchange. A considerable amount of the major costs of the expedition was paid by the sale of special airmail stamps issued by both Germany and the USSR.

The flight took place between July 24 and July 31, 1931. During the flight, the Graf Zeppelin traveled about 6,600 miles, at an average speed of 55 mph.  The airship performed all of its tests admirably, under Arctic conditions, and the expedition was considered a success. 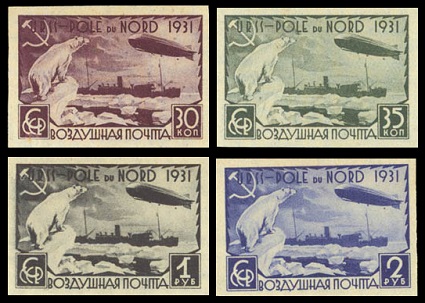 The stamps depict a Polar Bear, the Soviet icebreaker
"Malygyn" and the German Airship Graf Zeppelin.