In September 1928, the Weimar Republic issued its first stamps for use on mail carried by the airship LZ-127 Graf Zeppelin.

The design features the Graf Zeppelin, flying over the Atlantic Ocean, between North America and Europe.

Though issued for the first trans-Atlantic flight, the stamps were valid until the end of December 1937, and they were used on many subsequent airship flights. The Scott Catalog lists a 1 Rm. carmine stamp with this design, but it was not actually issued until 1931. 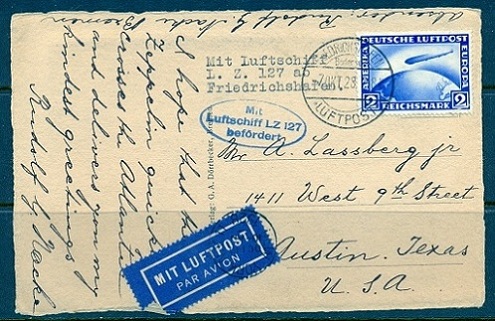 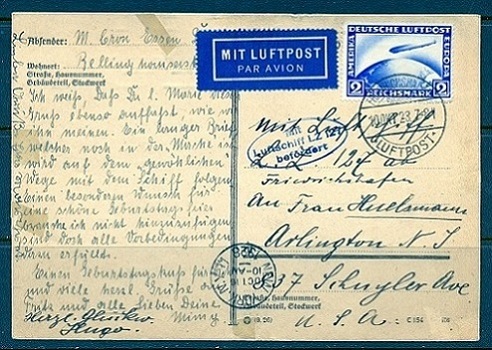 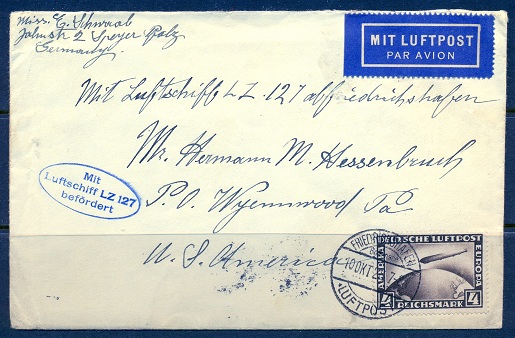 Enclosed letter, dated Speyer, 5 October 1928, from an Essie Schwab, indicates … “Just a line I will send you with the Airship Graf Zeppelin. I don’t want to go with them. Too fast for me …” 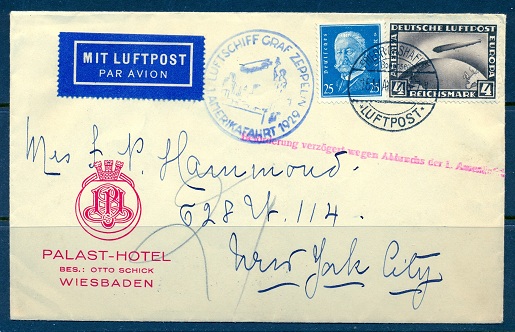 A Weimar Republic Graf Zeppelin 4 Mark + 25 Pf. Hindenburg definitive on flown cover from Wiesbaden, Germany to Lakehurst, N.J. (Addressed to New York City). Black Friedrichshaven, 15 May 1929 CDS. Handstamped Blue cachet “LUFTSCHIFF GRAFF ZEPPELIN / 1. AMERIKAFAHRT 1929”. Graf Zeppelin marking in red, indicating “Due to mishap the flight was delayed for the first America trip”. Black New York, N.Y. 5 August 1929 receipt postmark on back. The blue cachet was applied in flight, and it was for the second trans-Atlantic flight to Lakehurst in 1929. The Around-the-World flight letters received a large diamond shaped red cachet on them. Due to the accident in France, and the airship's return to the Weimar Republic for repairs, this letter, which should have taken four days to arrive at its destination, took over two and one half months!

This cover was mailed to New York City, at the regular trans-Atlantic letter rate of 4 Rm. I don't think it was intended to be processed with the same mail going on the May 1929 Around-the-World flight, but through a quirk of luck, that's the way this cover wound up.

The round-the-World flight attempt really began on May 14, 1929, when the airship departed from Friedrichshaven for its trip to Lakehurst. It didn't get too far when an engine breakdown forced a landing at Cuers, France. The engine was repaired and the Graf Zeppelin returned to Friedrichshaven. May 15 mail was held at Friedrichshaven, until August 1, 1929, when the Graf Zeppelin made another attempt to cross the Atlantic for Lakehurst. The delayed mail was backstamped in New York on August 5, 1929. 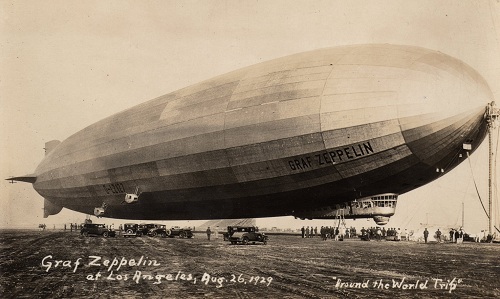 The entire around-the-Wold trip, from Lakehurst to Lakehurst, took 21 days, with stop-overs, though the actual flying time was just a little over 12 days. A U.S. franked letter carried on the entire trip, required $3.55 in U.S. postage, the equivalent of about $45.00 today. Just before the start of the Great Depression, an out-of-pocket expense like that, for a philatelic souvenir, took a REALLY DEDICATED collector!