Weimar Republic hyperinflation was a period of uncontrolled inflation in Germany, lasting from 1921 to 1923. In economics, hyperinflation is defined as inflation that is very high or out of control, a condition in which prices increase rapidly, as a currency loses its value

Hyperinflation is often associated with wars or their aftermath, economic depressions, and / or social upheavals. 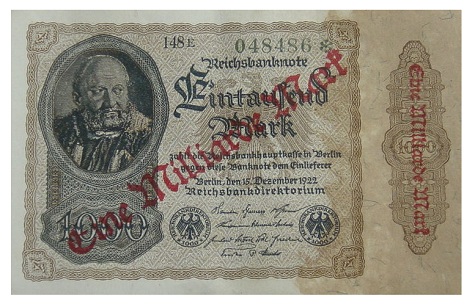 A Thousand Mark Banknote
Revalued to One Billion Marks during 1923

Many of the economic behaviors now associated with hyperinflation were first documented systematically in Germany -- astronomical increases in prices and interest rates, constant revaluation of the currency, consumer flight from cash to hard assets, and the rapid expansion of industries that produced those hard assets.

It is sometimes argued that the Weimar Republic had to inflate its currency to pay the war reparations required under the Treaty of Versailles, but this is somewhat misleading. The treaty did not allow payment in German currency.

The German currency was relatively stable at about 60 Marks to the US Dollar in 1921. The Allied "London Ultimatum" of May 1921 demanded reparations payments in gold or foreign currency, in annual installments of Two Billion Goldmarks, plus 26% of the value of Germany's exports.

The first payment was made in August 1921. That was the beginning of an increasingly rapid devaluation of the Mark. By November 1921 the exchange rate was 330 Marks to the US Dollar. The total reparations demanded by the Allies was 132 Billion Goldmarks, which was far more than the total German gold or foreign exchange.

An attempt was made by Germany to buy foreign exchange with Marks, backed by treasury bills and commercial debts, but that only increased the speed of devaluation. As a result, by December 1922, the exchange rate was 8,000 Marks to the US Dollar. By early 1923, the German economy was a complete disaster.

Although reparations accounted for about one third of the German deficit from 1920 to 1923, the government found reparations a convenient scapegoat. Other scapegoats included bankers and speculators, particularly foreign ones.

The hyperinflation reached its peak by November 1923, and it ended, when a new currency, the Rentenmark, was introduced in December 1923. In order to make way for the new currency, banks turned the old Marks over to junk dealers by the ton, to be recycled as paper. The monetary law of August 30, 1924 permitted the exchange of One Billion Marks in banknotes for one new Reichsmark, equivalent in value to One Rentenmark.

Although the hyperinflation ended with the introduction of the Rentenmark and the Weimar Republic continued for a decade afterward, hyperinflation is widely believed to have contributed to the Nazi takeover of Germany and to Adolf Hitler's rise to power. In his book, Mein Kampf, Adolf Hitler makes many references to the German debt and the negative consequences that brought about the rise of National Socialism. The hyperinflation also raised doubts about the competence of investment institutions, especially among a middle class, who had held cash savings and bonds. It also fostered resentment of Germany's bankers and speculators, many of which, unfortunately, were Jewish. With the impending economic and social upheaval brought on by the Great Depression at the end of the 1920's, it is not surprising that the National Socialist German Worker's Party easily came to power in Germany in the early 1930's.

Incidentally, the hyperinflated, worthless Mark banknotes of the early Weimar Republic became widely collected abroad. The Los Angeles Times estimated in 1924 that more of the decommissioned notes were spread across the United States than existed in Germany.

The same can be said for the huge inventories of hyperinflation stamps on hand in Germany at the end of 1923. As they had been demonetized, the mint sheets of stamps were valueless at the time. Few of the stamps were ever used for commercial or private letter postage, and many authenticated used examples of them are very valuable today. Most of the 1921-1923 hyperinflation stamps, in mint condition or favor-canceled, are still very inexpensive today, but they nevertheless make an attractive and fascinating philatelic study or collection.

The two medals shown above commemorate the height of the Weimar Republic hyperinflation period, in November 1923. They are a rather disturbing reminder of what the average German citizen had to contend with in their daily lives, at that time.

Return to Weimar Republic from
Hyperinflation - A Brief History