By the Summer of 1923, Weimar Republic hyperinflation was REALLY getting bad. On one hand, the value of the German Mark was decreasing almost every day, and on the other hand, consumer prices were sky-rocketing on a daily basis. The effects on the economy and on the German people were devastating. 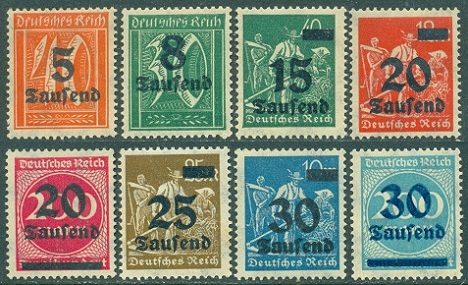 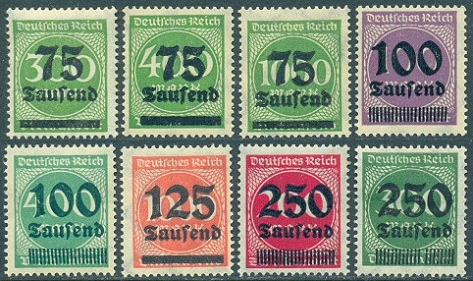 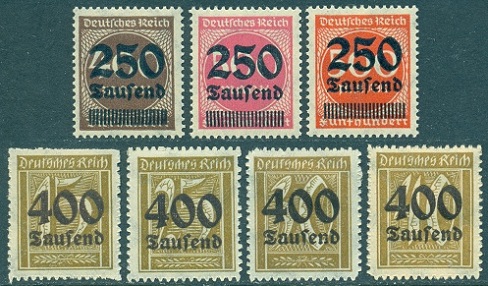 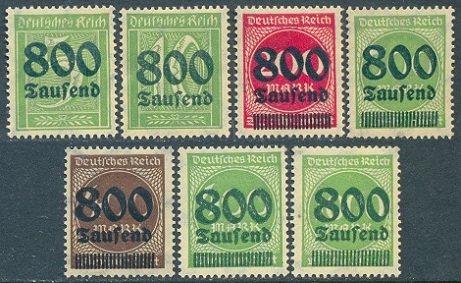 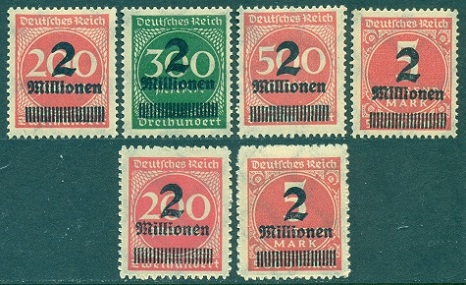 By August 1923, with the value of the German Mark fluctuating from day to day, designing and printing new postage stamps was out of the question. For the postal service of the Weimar Republic, there existed a state-of-emergency.

The 1923 postal rate table, for domestic / foreign letters under 20 grams, is shown below. By October of 1923, 2,000,000 Marks wasn't even enough to mail a single domestic letter, thus by that time, most of the re-valued stamps, shown in the images above, were all useless. 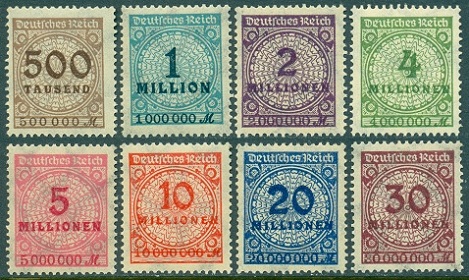 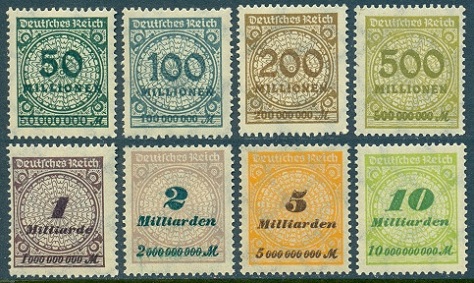 Due to the rate of hyperinflation, the previously surcharged issues had become obsolete. This required the creation of a new series of postage stamps, suited to keeping up with the rising postal rates.

There are many plate varieties on this set, and, due to the fact that the frame / background of the stamp was printed in a separate process from the denomination, there are also many value shifts on just about all the denominations. 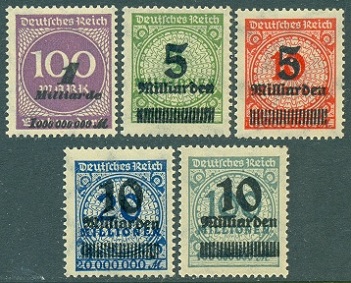 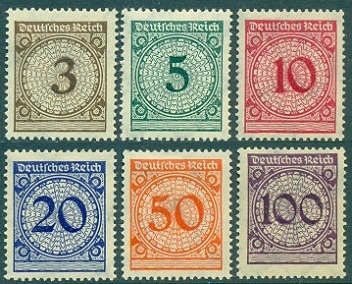 In December 1923, hyperinflation in the Weimar Republic ended! A new currency, the Rentenmark, was instituted, and the German economy began to recover.

In 1924, one Rentenmark (or Reichsmark) was equivalent to ONE BILLION Papermarks of the Weimar Republic hyperinflation period. Exchanging the old paper currency was futile, and many people, businesses, and banks, either re-cycled the old paper Marks or threw them in the trash.

They all feature a circular central design, with the numeral of value printed over it. The numerals were printed separately from the stamps, so there are also many shifts on this series. This whole series also exists imperforate and with missing value numerals. Most of them are scarce and expensive.

It would be unfathomable to even imagine the effect the hyperinflation had on businesses that relied on mail advertising, mail billing, mail order sales, etc., and on people, who may have lost their homes, possessions, or that may have even starved to death, because they didn't have the means of paying for food or necessities. History would soon forget the hyperinflation of 1921-1923, and Germany would once again become a thriving nation, but the German people would NEVER FORGET the pain and suffering they endured through this period in history. Combined with the Great Depression at the end of the decade, these events would lead to the eventual downfall of the Weimar Republic.