For the Weimar Republic, 1921 started out quietly. The gradual increase in prices, due to the ongoing devaluation of the Mark, started later in the year.

Before 1921, it cost 40 Pfennig to mail a domestic letter inside of Germany and 80 Pfennig to mail one outside of Germany. By early 1921, the existing domestic postal rate had held steady, but the foreign letter rate had risen to 1.25 Marks, an increase of over 50%. At the beginning of 1921, the highest denomination postage stamp available was the Four Mark value, but that wouldn't be the case for very long.

Based on today's economies, one wouldn't think that this was not terribly extreme, but at that time, it was an omen of horrible things to come. 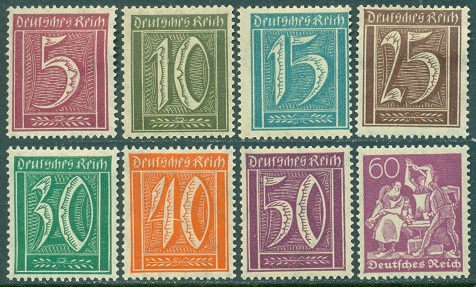 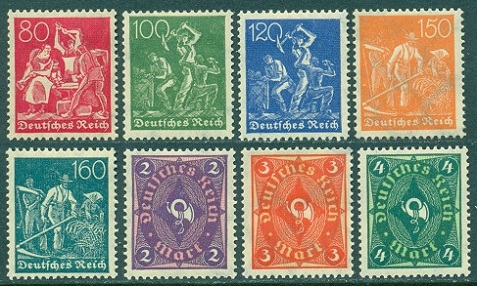 The new designs featured large numerals on the low values; iron workers, miners, and farmers, on the middle values; posthorns on the lower Mark values; large numerals on the 5 Mk. and 10 Mk. values (not shown above); and plowing on the highest value. The denominations ranged from 5 Pf. to 20 Mk. ... a rather innocent looking set of postage stamps! 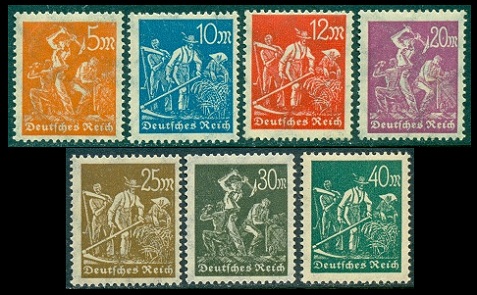 Wait a minute! What happened here?

Want to REALLY see what the beginnings of German hyperinflation looked like, in respect to letter postage rates? Look at the table below!

YIKES! Somebody brought up the BIG GUNS!

During this period, the highest denomination German stamp went from 20 Marks to 100,000 Marks ... that's a denominational increase of about 5,000%!

Starting to look like hyperinflation here, but these aren't ANYTHING compared to what was issued, beginning in mid-1923! The REALLY scary thing is that used examples of these stamps are actually COMMON! 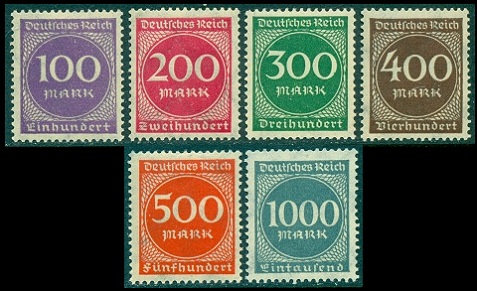 These designs, along with those of the 1921 definitive issues, would be the ones primarily used for the hyperinflation stamp surcharges of 1923. The stamps used for surcharging were also printed in other colors, different from the issued stamp colors shown here.

This looks bad, but, for the German government, the German economy, and the helpless German people, things would get MUCH WORSE!