The Weimar Republic, beginning in 1928, issued a new series of definitive postage stamps, featuring the portraits of their presidents.

Under the Weimar constitution, the head of state of the German Republic was the "Reichspräsident" or the "President of the Federal State".

The Weimar constitution actually remained in effect as the "official" government charter through 1945.  The third Reichspräsident was Adolf Hitler (1889-1945), who held the office from 1934-1945.  Out of respect for Hindenburg though, Hitler chose to be called "Führer und Reichskanzler" or "Leader and Reich Chancellor".

The final Reichspräsident was Admiral Karl Dönitz (1891-1980), who held the office for a brief time in 1945, between the death of Adolf Hitler and the surrender of Germany at the end of World War II.

For the purposes of the entity we refer to as the Weimar Republic though, there were only two presidents. 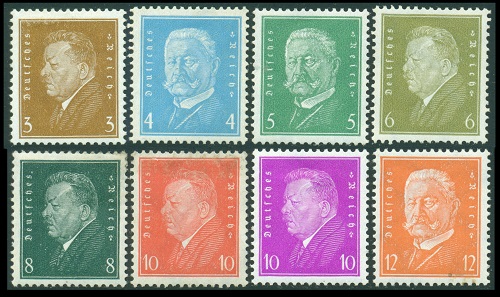 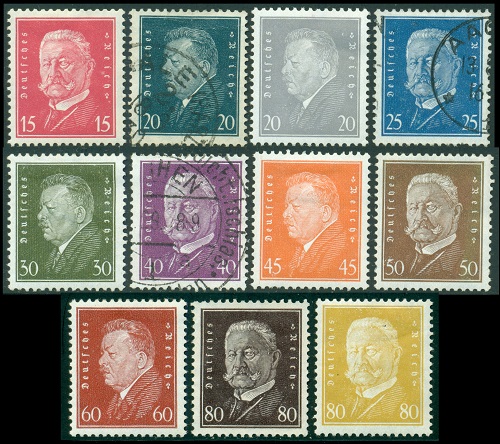 All of the Reichspräsident Series of definitive postage stamps are shown in the scans above (Mi. #410 // 66, Sc. #366-84).  They were issued between September 1928 and January 1932, and all of them show the portraits of either Friedrich Ebert or Paul von Hindenburg.

The scans above show the issues by the Scott Catalog grouping.  In the Michel Catalog, they are spread out into different groupings, according to their date of issue.

All the stamps shown above were issued in both panes of 100 and in vertical coil rolls.

A scarce variety of the 8 Pf. Dark Green denomination exists with a sideways network watermark. 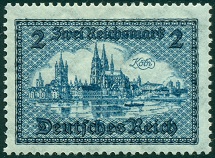 The 2 Reichsmark denomination definitive stamp, shown above (Mi. #440, Sc. #387), was issued in May 1930. The stamp is identical to the 2 Mark denomination stamp issued in 1924, with the exception that the inscription at the top of the stamp has now been changed to "Zwei Reichsmark" instead of "Zwei Mark".

At about the time the 2 Reichsmark denomination stamp was issued, examples of the 1924 1 Mark were also printed, with the inscription at the top of the stamp having "Eine Reichsmark" instead of "Eine Mark". Though they were never released, a few examples did make it into hands of collectors. They are all unused, on un-gummed paper, and they are exceedingly rare.  Even if one had the 20,000 Euros that this stamp catalogs, an example of this stamp could probably not be easily located for purchase. 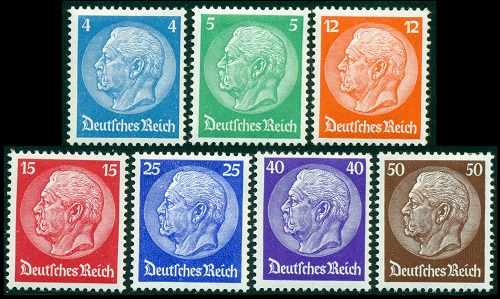 These are the first issues of what would become the Hindenburg Medallion Series of definitive postage stamps.

With the exception of the 50 Pf. Dark Brown denomination, all of these Weimar Republic definitive postage stamps were issued in both panes of 100 and in vertical coil rolls.  The 5 Pf. Green denomination was also issued in booklets. 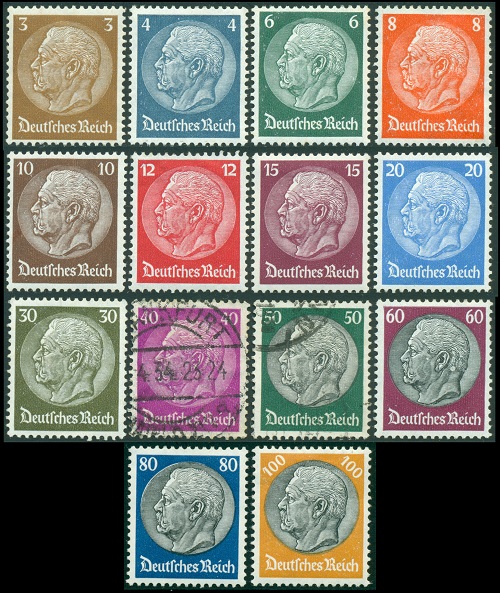 The stamps issued under the Weimar Republic are all watermarked network.  These definitive postage stamps would continue in use well into the Third Reich, but those stamps are all printed on watermarked swastika paper.

The 6 Pf., 8 Pf., and 12 Pf. denominations were also produced in booklets.  The booklet panes of these watermarked network stamps are scarce.