The new Weimar Republic issued their first stamps at the beginning of 1919, utilizing stocks of the Germania wartime printings of the former German Empire.

The two Germania wartime printing stamps of the German Empire, shown above (Mi. #105-06, Sc. #B1-2), were issued on May 1, 1919, as charity stamps, each with a 5 Pf. surcharge.  The two stamps were surcharged and overprinted "5 / Pf / für Kriegs / geschädigte" to raise money to help War Invalids. 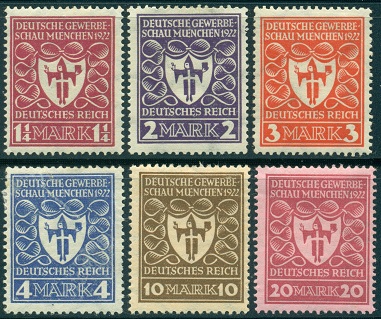 Each of the stamps shows the coat of arms of the City of Munich as its central design.  Munich's name is derived from the Benedictine Monks  who founded the city during the 13th Century.  Thus, a monk is depicted as the central figure of the city's coat of arms. 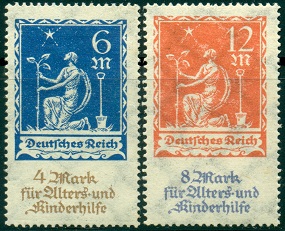 Each of the stamps depicts a woman planting a tree.

The three hyperinflation period definitive stamps of the Weimar Republic, shown above, were issued on February 19, 1923 as charity stamps.  These three stamps were surcharged, then overprinted "Rhein / Ruhr / Hilfe" to raise money to help refugees of the French Occupation of the Rhein - Ruhr Region in January 1923.  The region was returned to German control in 1925. 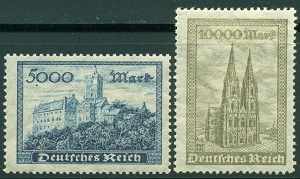 Today, the castle is on the World Heritage List, and it is listed as an "outstanding monument of the feudal system in Central Europe". One of the castle's most famous residents was Martin Luther, who lived there from 1551 to 1552.