The big event of 1951, for Vatican stamps, was the issue of the first souvenir sheet for Vatican City, commemorating the centennial of the first Papal States postage stamp.  Other issues of 1952-1953 feature saints and famous Popes. 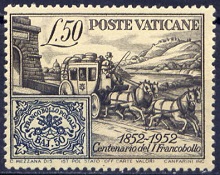 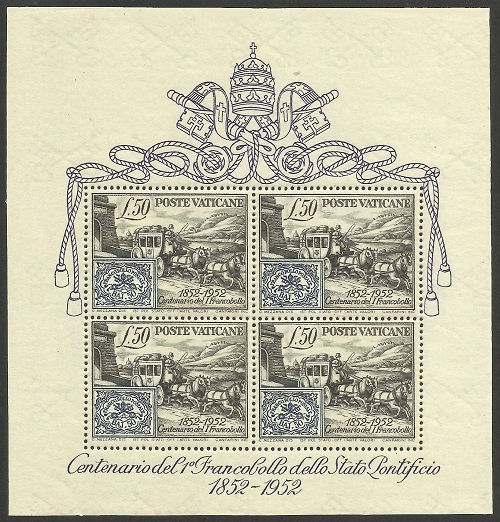 The pictorial commemorative Vatican stamp and souvenir sheet shown above (Sc. #155, #155a) were issued on June 9, 1952 to celebrate the 100th Anniversary of the First Postage Stamps of the Papal States.

The design features a Papal States stamp of 1852 and a contemporary stagecoach. 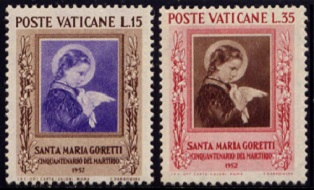 The two pictorial Vatican stamps shown above (Sc. #156-157) were issued on February 12, 1953 to commemorate the 50th Anniversary of the Martyrdom of St. Maria Goretti.

St. Maria Goretti (1890-1902) is one of the youngest canonized saints.  Her father died, when she was very young, and her family was forced to share a house with another family.  One of the members of the other family made sexual advances towards her, and when she refused him, he stabbed her.  She was taken to a hospital, where she forgave the attacker, shortly before she died.  Maria Goretti was beatified in 1947 and canonized in 1950.  She is the patron saint of crime victims, rape victims, teenage girls, and modern youth.

After being released from prison, her attacker repented and prayed to her every day, calling her "his little saint".  He also attended her canonization in 1950.  Later, he became a lay-brother of the Order of Friars Capuchin, working as a gardener and receptionist, until his death in 1970. 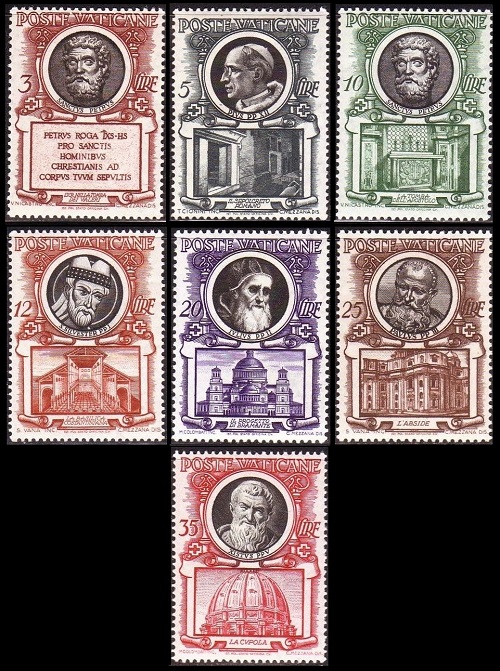 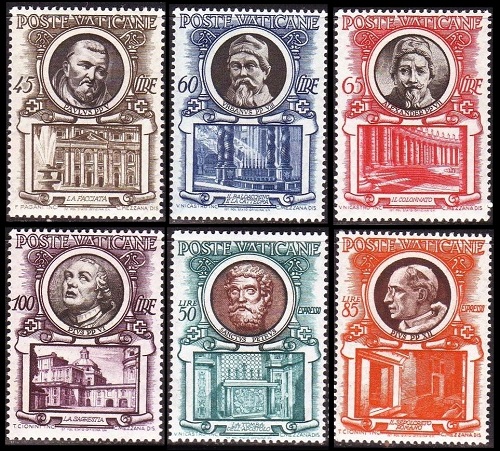 The designs, featuring the Popes that were instrumental in the creation of St. Peter's Basilica, are as follows. 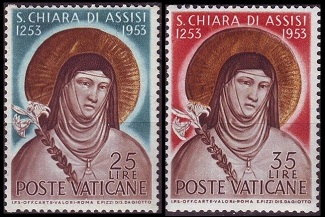 The two pictorial Vatican stamps shown above (Sc. #171-172) were issued on November 10, 1953 to commemorate the 800th Anniversary of the Death of St. Bernard of Clairvaux.

The common design features the Apparition of the Virgin Mary to St. Bernard.

St. Bernard of Clairvaux (1090-1153) was a French abbot, considered one of the founders of the Cistercian Monastic Order. 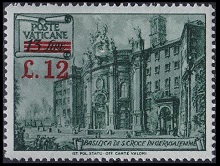 The 100 L. denomination stamp shown above (Sc. #173) was issued on December 29, 1953 to commemorate the 800th Anniversary of the Ordination of Peter Lombard.

The design features the Episcopal Seal of Peter Lombard.

Peter Lombard (1096-1160) was a scholastic theologian, the Bishop of Paris, and the author of four of the standard textbooks of theology.  For 400 years after his death, his books on theology were studied by both Catholic and Protestant theologians.

He died in July 1160, and he was buried in the Church of Saint-Marcel in Paris.  His tomb was destroyed during the French Revolution.