The commemorative and definitive Vatican stamps issued between 1942 and 1946 celebrate important people and events in Church and World history.  During these turbulent years of World War II, one special-purpose series of pictorial stamps carried a message of peace and compassion.

The three sets of special-purpose large-format pictorial Vatican stamps shown above were issued in 1942, 1944, and 1945.

Rare varieties of the 3 L. and 5 L. denomination stamps inscribed MCMXLIV exist with the image of Jesus Christ missing. 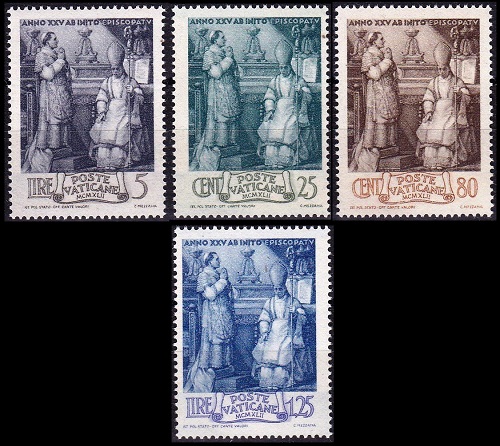 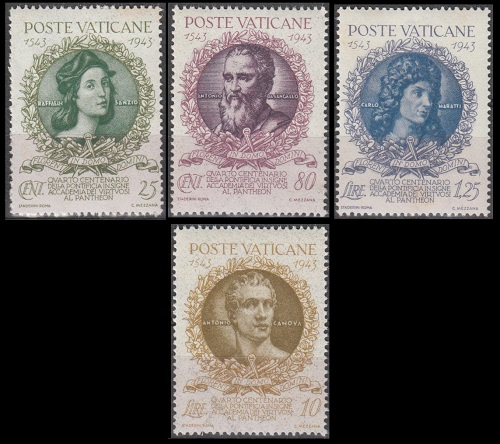 The four pictorial Vatican City stamps shown above (Sc. #87-90) were issued on November 21, 1944 to commemorate the 400th Anniversary of the Pontifical Academy of the Virtuosi of the Pantheon.

The Pontifical Academy of Fine Arts and Letters of the Virtuosi of the Pantheon was founded on October 15, 1542 by Pope Paul III (Lived: 1468-1549, Pope: 1534-1549).  It is a pontifical organization of painters, sculptors, architects, musicians, poets, and authors who have achieved the GREATEST LEVELS OF ARTISTIC ACCOMPLISHMENT.  The current members occasionally stage exhibits or performances at the Pantheon in Rome.  Four of the organization's honorary members are pictured in the stamps shown above. 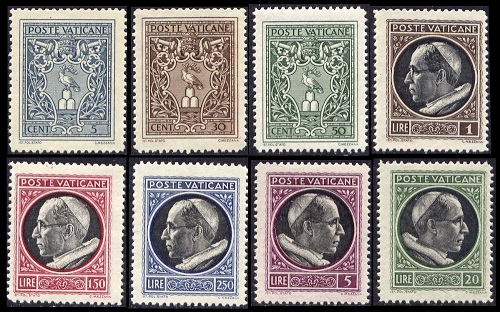 The eight new definitive Vatican stamps shown above (Sc. #91-98) were issued on March 5, 1945.  These definitive stamps are engraved on unwatermarked paper, and they are perforated 14.

All of them, except for the two highest denominations, exist in pairs that are imperforate between. 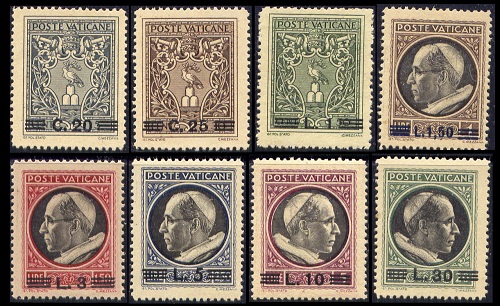 Most of them exist in pairs that are imperforate between or in pairs with one stamp missing the overprint. 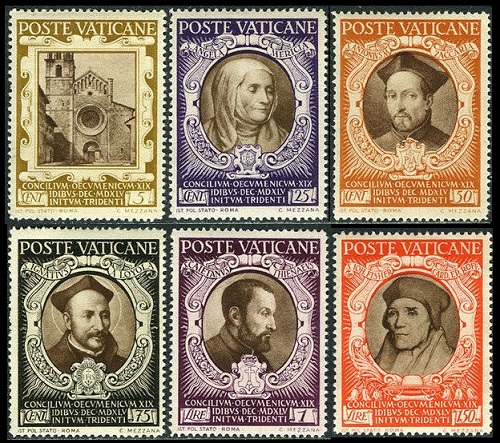 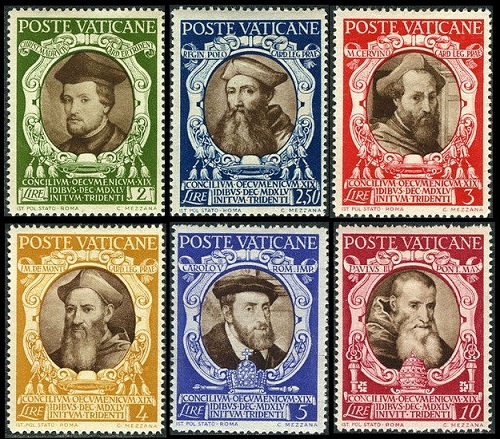 The twelve pictorial commemorative Vatican stamps shown above (Sc. #110-121) were issued on February 21, 1946 to celebrate the 400th Anniversary of the Council of Trent.

The twelve designs are as follows.

The Council of Trent, held in Trent and Bologna Italy, in twenty-five sessions between 1545 and 1563, was one of the Roman Catholic Church's most important ecumenical councils.  Prompted by the Protestant Reformation, the Council of Trent has been described as the embodiment of the Counter-Reformation.