The commemorative and definitive Vatican stamps issued between 1935 and 1940 celebrate important people and events in Church and World history, as well as the proclamation of a new Pope. 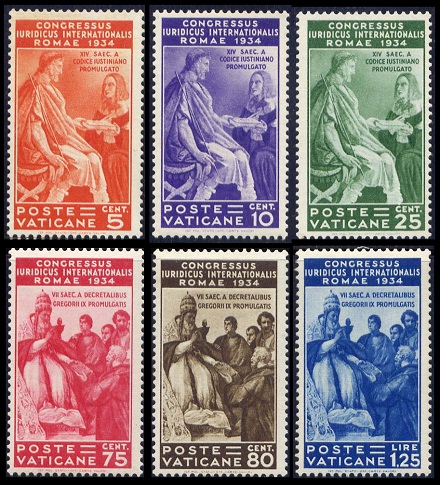 The six pictorial Vatican City stamps shown above (Sc. #41-46) were issued on February 1, 1935 to honor the the International Juridical Congress, held in Rome during 1934.

The International Juridical Association (1931-1942) was an organization of socially minded lawyers that championed civil rights, immigration, and labor law issues. 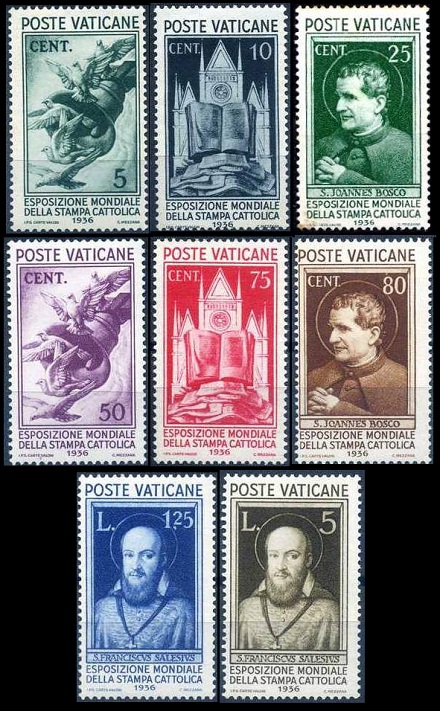 The Catholic Press Association, founded in 1911, is an association of print media professionals dedicated to reporting on the Roman Catholic Church.  The goal of its members is to support the social, intellectual, and spiritual needs of families and to spread the holy doctrine. 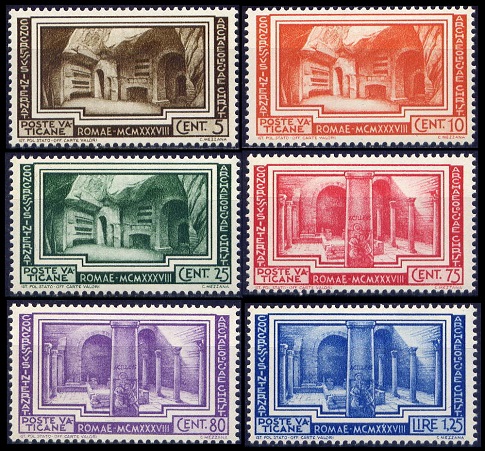 The two common designs, depicting views of the Catacombs beneath Rome, are as follows.

The Catacombs of Rome are a network of about 40 subterranean structures, usually located along the main roads outside of the walls of the Ancient City of Rome.  They were primarily used for burial places and for safe places of worship by early Christians.  The catacombs are ornately decorated, and they contain vital historical information about Christianity in the 1st and 2nd Centuries.  There are also Jewish Catacombs, from this same era, underneath the City of Rome.

Burying bodies inside of the City of Rome was forbidden by Roman Law.  The Roman custom had always been to cremate the dead and then store the ashes in urns.  The Christians, however, considering Resurrection, buried their dead in the ground, in ossuaries, or in tombs, depending on their financial capabilities.

The Catacombs of St. Callixtus, near the Appian Way, were built during the 2nd Century, and they extend for almost twelve miles.  The arcades, within the catacombs, contain the remains of over fifty martyrs and of sixteen Popes.

The Catacombs of St. Domitilla are located near the Appian Way, and they extend for almost nine miles!  These catacombs contain almost 150,000 bodies!

The Catacombs of Rome fell into disuse at the end of the 3rd Century, when Christianity became the official religion of the Roman Empire. 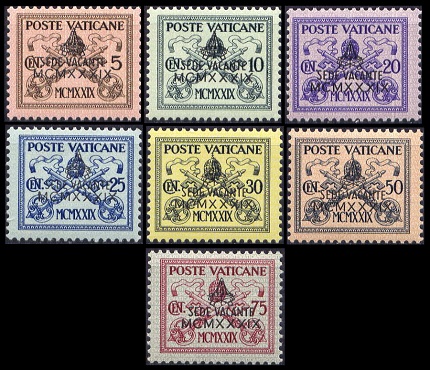 The seven overprinted definitive Vatican stamps shown above (Sc. #61-67) were issued on February 20, 1939 for the Interregnum, following the death of Pope Pius XI on February 10, 1939.

The overprint consists of the Papal Crown and the inscription "SEDE VACANTE" (VACANT THRONE) / MCMXXXIX (1939).

A rare variety of the 30 C. denomination exists in a pair, with one of the stamps having a missing overprint. 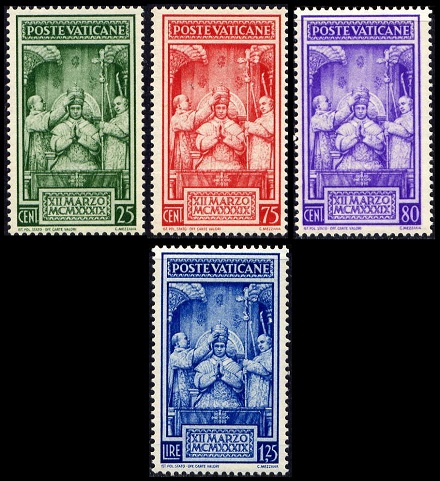 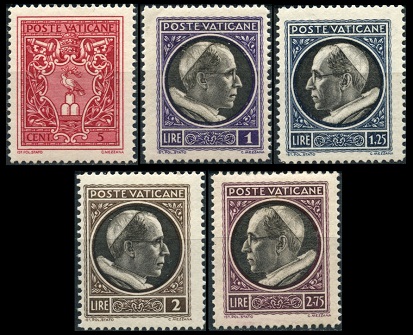 Rare varieties of the 5 C. and 1.25 L. denominations exist imperforate. 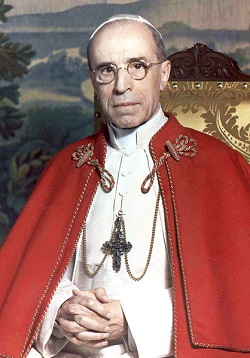 While Vatican City was "officially" neutral during World War II, Pope Pius XII maintained links to the German Resistance, aided victims of the war, lobbied for peace, and spoke against race based murders and other wartime atrocities.  Pius XII secretly urged churches in Northern and Eastern Europe to hide Jews that were fleeing the Nazis.  He was also a staunch opponent of Communism.

As was the case with the previous Pope, Vatican City has immense spiritual and moral authority over the Christian populations of the World, however they have little political power, and they have no military power.  There was little Pope Pius XII could have done to stop the human tragedy that was unfolding across Europe.  In fact, had he tried to make a media spectacle of the issue, publicly attacking the perpetrators, it may have resulted in making the level of suffering even worse for the victims.

Pope Pius XII died on October 9, 1958, after a reign of nineteen years.