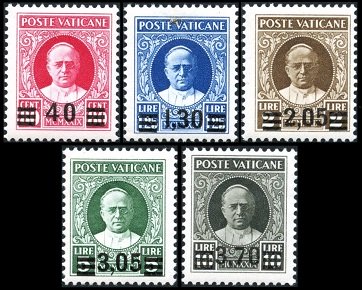 Vatican stamps, or Vatican City stamps, came into being in 1929, when the Lateran Treaty was signed between the Holy See [Seat of Government of the Church] in Rome and the Kingdom of Italy, declaring that the Vatican was an independent city-state, with sovereign authority over its own affairs.

The Vatican is a tiny little absolute-monarchy, with a total area of 110 square acres and a population of about 1,000, yet it has shaped Western civilization for the last 1,700 years.

The first definitive Vatican stamps were actually issued by the Papal States or Roman States in 1852.  The Papal States existed from 754 to 1870, with the Pope as their monarch.  At one time, the Papal States included much of modern-day central Italy.  Their territories were seized by the Kingdom of Sardinia in 1861, during the unification of Italy.

But the Vatican dates back farther than that, all the way back to Ancient Rome.  The Roman Royal Family built gardens on Vatican Hill and a circus (arena) for chariot racing in the early 1st Century.  The circus was completed by the Roman Emperor, Nero (37-68), who used it for the torture and execution of Christians.  It was in the circus of Nero that the Apostle Peter was crucified sometime after A.D. 64.

At the center of the circus was the obelisk, brought to Rome from Egypt by the Emperor Caligula (12-41) in A.D. 37.  The obelisk has remained there all these centuries, and today, it is still located in the middle of St. Peter's Square.

In the early 4th Century, the first Christian Roman Emperor, Constantine I (272-337) the Great, built a Christian church on Vatican Hill, above the place where the Apostle Peter was crucified and buried.  That church has been expanded and modified through the centuries, and  it's ancient column stones can still be seen in the catacombs underneath today's St. Peter's Basilica.

500th Anniversary of the Vatican Museums
Commemorative Stamps issued in 2006

Some of the early Popes were art collectors as well.  The Vatican has collected pagan art and sculptures from both Ancient Greece and Ancient Rome that may have otherwise been lost forever, and today, visitors to the Vatican Museums are able to still enjoy them.

In the 16th Century, the Vatican hired the best Renaissance artists and sculptors in Italy to decorate St. Peter's Square and the interiors of all the buildings within the city walls.  Five hundred years later, visitors to Vatican City can still look upon them with awe!

Collecting Vatican stamps provides a glimpse into the creation and development of our modern Western civilization, featuring the development of Christianity, the great works of art from our past, and the people and places that have shaped our lives over the last 2100 years. 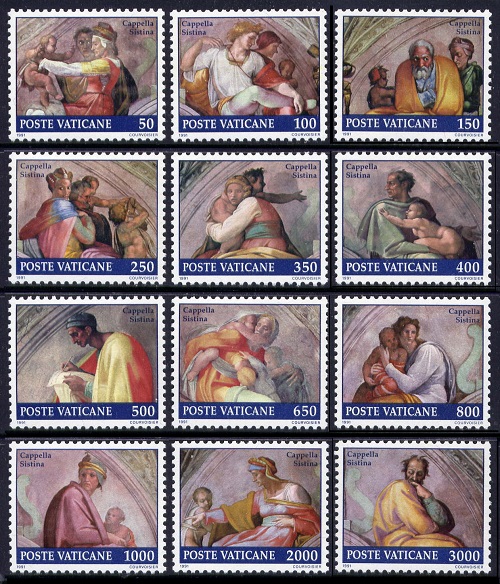 Collecting Vatican stamps can also be fun, in addition to being inspiring, and a complete collection of Vatican City stamps can be assembled for a moderate investment, probably considerably less than a couple months' mortgage payments for many people.

Links to historical articles and reviews of many of the postage stamps of Vatican City will eventually appear at the top of the third column of this page.