Forty-six commemorative US stamps were issued between 1969 and 1970, making an average output of about twenty-three commemorative stamp issues per year. 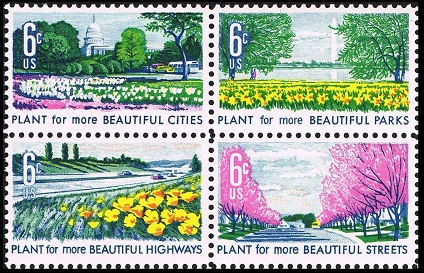 The 6 C. denomination stamp shown above, at the left (Sc. #1369), was issued on March 15, 1969 to celebrate the 50th Anniversary of the American Legion, the charitable organization that provides services and support for American veterans.

The design features the heraldic eagle from the Great Seal of the United States, and the inscription "Veterans as Citizens". 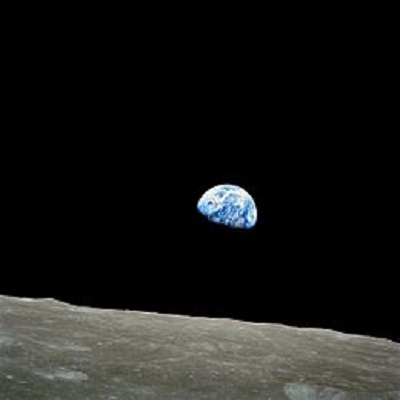 Something extraordinary was about to happen!  In a speech to a joint session of Congress on May 25, 1961, President John F. Kennedy pledged that the United States would send a man to the Moon and return him safely to Earth before the end of the decade.  There were setbacks, such as the Apollo 1 disaster, but during 1968 and 1969, IT ACTUALLY HAPPENED!  On December 24, 1968, while in orbit around the Moon, the three astronauts in the Apollo 8 spacecraft became the first human beings ever to witness an EARTHRISE, taking the photograph shown above.  And, over the next eight months, even MORE unimaginable space exploration feats would take place that no one could have ever fathomed at that time.

The 6 C. denomination stamp shown above (Sc. #1371) was issued on May 5, 1969 to celebrate the Apollo 8 Mission, which put the first men into orbit around the Moon.

A little over 69 hours into the flight, the Apollo 8 spacecraft entered lunar orbit on December 23, 1968.  Over the next twenty hours, the Apollo 8 spacecraft made ten complete orbits of the Moon, witnessing the EARTHRISE during the fourth orbit.  During the orbital mission, the astronauts took 700 photographs of the Moon and 150 photographs of the Earth.

The Apollo 8 spacecraft returned to Earth on December 27, 1968, after having completed the mission in a little bit over six days, and after having flown over 504,000 miles.

William Christopher Handy (1873-1958) was an American blues composer and musician, regarded as the Father of the Blues.


The 6 C. denomination stamp shown above, at the right (Sc. #1374), was issued on August 1, 1969 to honor John Wesley Powell and to celebrate the 100th Anniversary of the Powell Geological Expedition.

John Wesley Powell (1834-1902) was a soldier, geologist, explorer of the American West, a university professor, and the director of major scientific and cultural institutions.  He is best remembered for the 1869 Powell Geological Expedition, a three month trip down the Green and Colorado Rivers, including the first known passage by Europeans through the Grand Canyon. 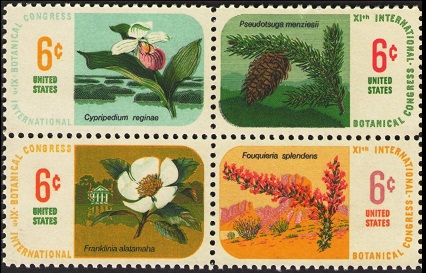 The designs of these US stamps feature a Douglass Fir (Northwest), a Lady's-Slipper (Northeast), an Ocotillo (Southwest), and a Franklinia (Southeast). 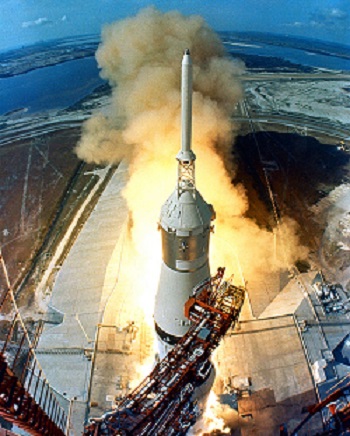 The day President Kennedy had dreamed about had finally arrived.  There were actually TWO spacecraft on top of the Atlas rocket that blasted off from Kennedy Space Center on July 16, 1969 ..... The Apollo 11 mission planned to make a manned, soft-landing on the surface of the moon! 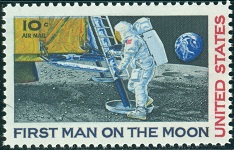 The 10 C. denomination Air Mail stamp shown above (Sc. #C76) was issued on September 9, 1969 to celebrate the completion of the Apollo 11 Mission and the First Man on the Moon.

These US stamps were printed in sheets of 32 subjects, which have orange red phosphor tagging.  All US Air Mail stamps have orange red tagging, as opposed to the yellowish green tagging applied to regular US stamps.

The following events were broadcast on live television and seen by over 600 million viewers back on the Earth.  For a brief time, all human beings were united in a single cause, regardless of their particular ideologies.

During the 30th orbit, on July 20, 1969, the "Eagle" separated from the Apollo 11 "Columbia" spacecraft, with Neil Armstrong and Edwin "Buzz" Aldrin, Jr. on-board, and the Lunar landing-craft began its descent towards the Sea of Tranquility.  At 20:17 UTC on July 20, 1969, Neil Armstrong sent the following message from the "Eagle" to the Mission Control Center in Houston, Texas:  "Houston, Tranquility Base here, the Eagle has landed".

At 02:39 UTC on July 21, 1969, Neil Armstrong opened the hatch of the "Eagle" and stepped out onto an external ladder.  He slowly descended the ladder, and at 02:56 UTC, he stepped off the base of the ladder onto the soft surface, becoming the first human ever to set foot on the Moon.  As he stepped onto the Moon, Armstrong said: "That's one small step for man, one giant leap for mankind".  A plaque, signed by the Apollo 11 astronauts and U.S. President Richard Nixon, was left at the site, stating "Here men from the planet Earth first set foot upon the Moon, July 1969 A.D.  We came in peace for all mankind".  Buzz Aldrin later joined Neil Armstrong on the surface of the Moon, where they took photographs and made videos of their activities, describing the view as "Magnificent desolation".

During their time on-board the "Eagle" and during their EVA (Extra-Vehicular Activity), the two astronauts spent about twenty-one and a half hours on the surface of the Moon, collecting almost 48 pounds of Lunar material for their return to Earth.

With the astronauts back on-board "Columbia" and the mission now completed, the "Eagle" was jettisoned into Moon orbit.  The Apollo "Columbia" spacecraft returned safely to Earth, landing in the Pacific Ocean on July 24, 1969.

The 6 C. denomination stamp shown above, at the left (Sc. #1380), was issued on September 22, 1969 to celebrate the 150th Anniversary of the Dartmouth College Case, which Daniel Webster argued before the Supreme Court, reasserting the sanctity of contracts.

The design of these US stamps features Daniel Webster and Dartmouth Hall.

The design of these US stamps features a symbolic depiction of a child being cured. 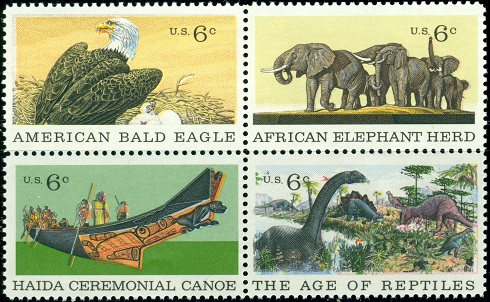 The four se-tenant 6 C. denomination US stamps shown above (Sc. #1387-90) were all issued on May 6, 1970 to publicize Natural History and to celebrate the 100th Anniversary of the American Museum of Natural History in New York City.

The designs of these US stamps feature an American Bald Eagle, an African Elephant herd, a Tlingit Chief in a Haida Ceremonial Canoe, and Jurassic Period Dinosaurs (Brontosaurus, Stegosaurus, Aliosaurus). 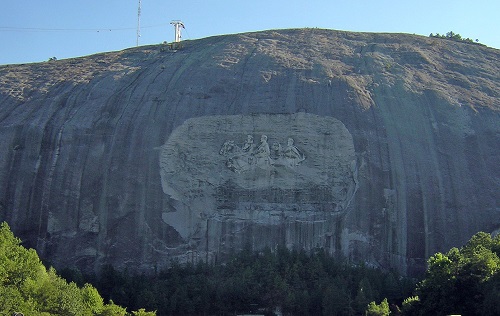 
The 6 C. denomination stamp shown above, at the right (Sc. #1409), was issued on October 17, 1970 to celebrate the 150th Anniversary of Fort Snelling, Minnesota, an important outpost for the exploration of the American Northwest.

The design of these US stamps features Fort Snelling, a Keel-boat, and Tepees. 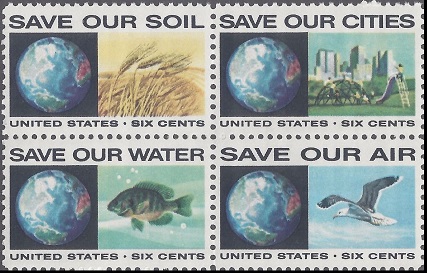 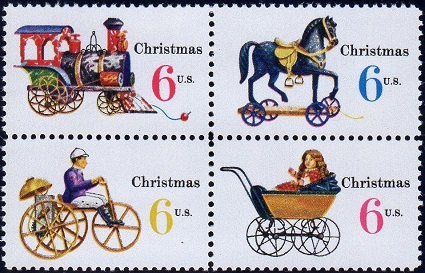 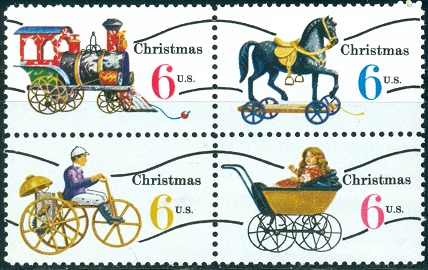 These secular-themed Christmas stamp designs feature antique Children's Toys, with them being a tin and cast-iron locomotive, a horse on wheels, a mechanical tricycle, and a doll carriage.

These stamps were also issued with a special precancel consisting of wavy horizontal lines.  They are also shown above (Sc. #1415a-18a / #1418c). 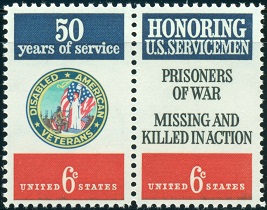 The se-tenant pair of 6 C. denomination US stamps shown above (Sc. #1421-22) were issued on November 24, 1970 to celebrate the 50th Anniversary of the Disabled Veterans of America and to honor the contributions of U.S. Servicemen, particularly those who were prisoners of war, missing in action, or killed in action.


Return to Modern US Stamps from
Commemoratives of 1969-1970

The design features the belfry of the Mission San Carlos Borromeo de Carmelo in Carmel-by-the-Sea, California.

The design features a Camellia and a Yellow-shafted Flicker, the state flower and state bird.

The 6 C. denomination stamp shown above (Sc. #1381) was issued on September 24, 1969 to celebrate the 100th Anniversary of Professional Baseball.

The design features a batter.

The 6 C. denomination stamp shown above (Sc. #1382) was issued on September 26, 1969 to celebrate the 100th Anniversary of Intercollegiate Football.

The design features a football player (from the number, probably a running-back) and a football coach. 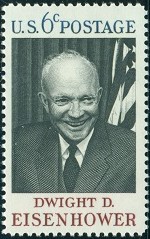 This secular-themed Christmas stamp design features the painting, "Winter Sunday in Norway, Maine", by an unknown primitive artist.  The painting is the property of the N.Y. State Historical Association, in Cooperstown, N.Y.

Special precancels were applied to these US stamps in four cities, Baltimore, Maryland; Atlanta, Georgia; Memphis, Tennessee; and New Haven, Connecticut.  The catalog value of stamps with these precancels is about three times that of the regular stamps. 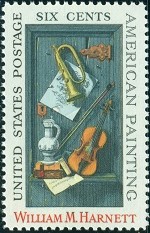 The design features the painting, "Old Models", by William M. Harnett (1848-1892), which is in the Museum of Fine Arts in Boston, Massachusetts.

The design features a painting of the "Lighthouse at Two Lights, Maine" by Edward Hopper (1882-1967), a popular American realist painter and print-maker.

The design features an American Buffalo.

The 6 C. denomination stamp shown above (Sc. #1406) was issued on August 26, 1970 to celebrate the 50th Anniversary of the 19th Amendment to the U.S. Constitution, granting women the right to vote.

The design features suffragettes of 1920 and a woman voter of 1970.

The 6 C. denomination stamp shown above (Sc. #1407) was issued on September 12, 1970 to celebrate the 300th Anniversary of the founding of Charles Town (Charleston), the first permanent settlement of South Carolina.

The design features symbols of the economic and historical development of South Carolina, against a pine wood background.

The annual 6 C. denomination holiday mail stamp shown above was issued on November 5, 1970.

This religious-themed Christmas stamp design features the 1523 painting, "The Nativity", by the Venetian Renaissance painter Lorenzo Lotto (1480-1557).  The painting is in the National Gallery of Art in Washington, D.C.

This stamp was also issued with a special precancel consisting of horizontal lines.  It is also shown above.

There are TWO TYPES of this stamp:

Type II - is printed on shiny surfaced paper, has a sharper impression, and there is no snow-flaking in the sky.  There are horizontal gum-breaker ridges.  (Sc. #1414d, #1414e)

The design features The Mayflower and the Pilgrims.