Thirty-three commemorative US stamps were issued between 1965 and 1966, making an average output of about sixteen commemorative stamp issues per year.

Some single US stamps noted below will have two catalog numbers.  In those cases, the second number is that of the "phosphor tagged" variety.

It has been observed by many philatelists over the years that the number of stamp issues, beginning in the 1960's, were excessive. I guess at some point, the postal service determined that they could sell many more commemorative US stamps to collectors than to actual postal customers.  It took them long enough!  The governments of the Eastern European Socialist countries figured that out decades earlier!

The 5 C. denomination US stamp shown above, at the left (Sc. #1261), was issued on January 8, 1865 to celebrate the 150th Anniversary of the Battle of New Orleans and the Establishment of Peace between Great Britain and the United States.

The Battle of New Orleans was the last major engagement of the War of 1812.  It was actually fought between December 24, 1814 and January 8, 1815 at Chalmette Plantation, Louisiana.  The War of 1812 actually ended with the signing of the Treaty of Ghent on December 24, 1814, however trans-Atlantic communications didn't travel very quickly in those days.  The battle was a decisive American victory, and it dashed any hopes of the British establishment of a colonial foothold, ever again, within United States territory.

The design of these US stamps features Major General Andrew Jackson and the sesquicentennial medal.

The Magna Carta or Magna Carta Liberatum (Latin:  Great Charter of the Liberties) is a charter, or treaty, signed by King John of England at Runnymede, near Windsor, on June 15, 1215.  It was drafted by the Archbishop of Canterbury to make peace between the Crown and the rebellious barons.  It promised protection of church rights, protection from illegal imprisonment, access to swift justice, and limitations of feudal payments (taxes) to the Crown.  During the ensuing centuries, the Magna Carta established the basis of England's, and, ultimately, the United States' statue law.

The 5 C. denomination US stamp shown above, at the left (Sc. #1262), was issued on February 15, 1965 to publicize the importance of Physical Fitness and to celebrate the 100th Anniversary of the first Sokol (Athletic) Organization in America.

The design features a discus thrower.


The 5 C. denomination US stamp shown above, at the right (Sc. #1263), was issued on April 1, 1965 to publicize the Crusade Against Cancer and the importance of Early Cancer Diagnosis.

The design features a microscope and a stethoscope.

Sir Winston Spencer Churchill (1874-1965) was a British politician who was Prime Minister of the United Kingdom from 1940-1945 and from 1951-1955.  He is regarded as the greatest wartime leader of the 20th Century.  Churchill was also an army officer, a historian, a writer, and an artist.  For his achievements, he became the first person to be made an honorary citizen of the United States in 1963.

The Salvation Army, originally known as the East London Christian Mission, is a Christian church and a charitable organization, structured in a quasi-military fashion.  It was founded on July 2, 1865 in London by the former Methodist circuit-preacher, William Booth (1829-1912).  The purpose is: "the advancement of the Christian religion ... of education, the relief of poverty, and other charitable objects beneficial to society or the community of mankind as a whole".

The 5 C. denomination stamp shown above, at the left (Sc. #1266), was issued on June 26, 1965 to publicize International Cooperation Year 1965 and to celebrate the 10th Anniversary of the United Nations.

The design of these US stamps features the International Cooperation Year (ICY) emblem.

Robert Fulton (1765-1815), was an American engineer and inventor.  He designed the first commercial steamship, the Clermont.  In 1800, he was also commissioned by Napoleon Bonaparte of France to design the Nautilus, the first practical submarine in history.

Dante Alighieri (1265-1321) was a noteworthy Italian poet of the Middle Ages, but he is World-renowned today for a single work, The Divine Comedy.  The Divine Comedy, written between 1308 and 1321, is a fictional poetic work in three parts.  The verse follows Dante on his journey, with the Roman poet, Virgil, as his tour guide, through Hell, Purgatory, and Paradise (Heaven).  The comedic part is that Dante included historical figures from the past, as well as political figures from his own time (that he disliked) in his Divine Comedy, especially in the section describing Hell.

Herbert Hoover (1874-1964) was a professional mining engineer and businessman.  He became the head of the U.S. Food Administration during World War I, and he achieved World-wide notoriety through his humanitarian efforts in war-time Belgium.  Hoover ran for President in 1928, having no prior elected-office experience, and he won the election.  Half way through his term, the Great Depression began, which severely affected his presidential legacy.  One of his greatest public works projects, during the Great Depression, was the construction of the Boulder Dam on the Colorado River.  The dam was later renamed to the Hoover Dam, in his honor.

The 5 C. denomination stamp shown above, at the left (Sc. #1272), was issued on September 3, 1965 to publicize Traffic Safety and Traffic Accident Prevention.

The design features a red traffic signal-light and the inscription "Stop traffic accidents".

The design features a world map, a radio sine wave, and Morse code. 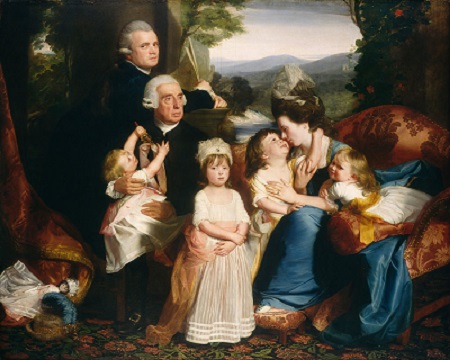 The 5 C. denomination stamp shown above, at the left (Sc. #1273), was issued on September 17, 1965 to commemorate the 150th Anniversary of the Death of John Singleton Copely.

The design of these US stamps features the portrait of Elizabeth Clarke Copely (1770-1866), one of the daughters of John Singleton Copely.  This is a detail from the larger painting (shown above) of the Copely Family, painted during the time they were living in London.

John Singleton Copely (1738-1815) was an American painter from Boston, Massachusetts.  He was active in both America and England, but he is best remembered for his portrait paintings of important figures in Colonial New England.  His paintings were innovative, in that they often depicted artifacts related to these individuals' lives.


The 5 C. denomination stamp shown above, at the right (Sc. #1271), was issued on August 28, 1965 to celebrate the 400th Anniversary of the Settlement of Florida and the first permanent European Settlement in Continental North America near present day St. Augustine, Florida in 1565.

The design of these US stamps features a Spanish explorer, the Royal Flag of Spain, and Spanish Galleons.

The design of these US stamps features the Indiana Sesquicentennial Seal.

The 5 C. denomination stamp shown above, at the left (Sc. #1306), was issued on March 16, 1966 to celebrate the 50th Anniversary of the Migratory Bird Treaty between the United States and Canada.

The design of these US stamps features migratory birds crossing the United States - Canada border.


The 5 C. denomination stamp shown above, at the right (Sc. #1307), was issued on April 9, 1966 to promote the Humane Treatment of Animals and to celebrate the 100th Anniversary of the American Society for the Prevention of Cruelty to Animals (ASPCA).

The design of these US stamps features a mixed-breed dog. 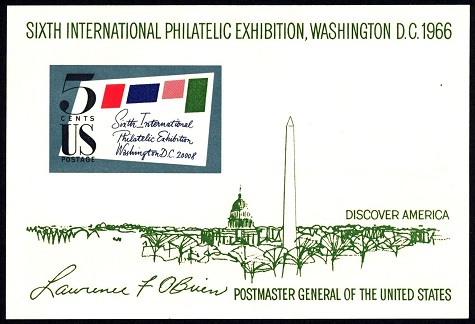 The 5 C. denomination sheet-format stamp shown above, at the top (Sc. #1310), was issued on May 21, 1966 to publicize the Sixth International Philatelic Exhibition.

The design of these US stamps features a stamped letter.

The souvenir sheet features an imperforate version of the sheet-format stamp, a view of the Capitol Building and Washington Monument in Washington, D.C., the signature of Lawrence F. O'Brien, the Postmaster General of the United States, and the slogan "Discover America".


The 5 C. denomination stamp shown above, at the right (Sc. #1312), was issued on July 1, 1966 to commemorate the 175th Anniversary of the U.S. Bill of Rights, being the First Ten Amendments to the United States Constitution, ratified on September 25, 1789.

Very briefly summarized, the first ten amendments to the U.S. Constitution are as follows:

The design features the Polish heraldic eagle and a cross.

The design features a view of the Jefferson Memorial and Cherry Blossoms.

John Chapman or Johnny Appleseed (1774-1845) was an American pioneer nurseryman who introduced apple trees to large parts of Pennsylvania, Ohio, West Virginia, Indiana, and Illinois.  He became an American legend, while still alive, due to his kind, generous ways, and his leadership in conservation.


The 5 C. denomination stamp shown above, at the right (Sc. #1319, #1319a), was issued on October 21, 1966 to publicize the 5,600 mile Great River Road, connecting New Orleans, Louisiana with Kenora, Ontario, following the Mississippi River and its tributaries for most of the way.

The design features a map of the Central United States and the route of the Great River Road.


Return to Modern US Stamps from
Commemoratives of 1965-1966


This religious-themed design features an Angel Gabriel with Trumpet weather vane of 1840.

The (color-enhanced) weather vane, shown on the stamp, is from a drawing by Lucille Gloria Chabot (1908-2005), which is based on an 1840 weather vane, once atop the People's Methodist Church in Newburyport, Massachusetts.  The original weather vane has long since been destroyed. 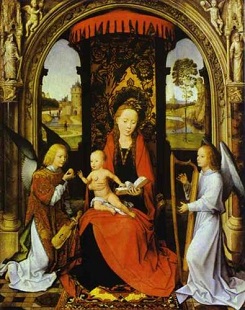 This religious-themed design is modeled after the central detail of the 1480 painting, "Madonna and Child with Angels" (shown above) by the Flemish Renaissance painter Hans Memling (1430-1494).

The painting is part of the Mellon Collection in the National Gallery of Art in Washington, D.C.

The design features the Statue of Liberty and the United States flag.