The commemorative US stamps of 1938 and 1939 showcased monumental anniversaries, with the most important of them being the events that led to the creation of a new nation during the late 18th Century.

Preamble of the United States Constitution

We the People of the United States, in Order to form a more perfect Union, establish Justice, insure domestic Tranquility, provide for the common defense, promote the general Welfare, and secure the Blessings of Liberty to ourselves and our Posterity, do ordain and establish this Constitution for the United States of America.

The new constitution, replacing the Articles of Confederation of 1777, had been drafted and signed by 39 of the 55 delegates to the Constitutional Convention on September 17, 1787.  HOWEVER, the new, federal government could not OFFICIALLY be created, until the new constitution was ratified by the governments of the thirteen member states of the American Confederation.  That would take a substantial amount of time, AND a LOT of political effort.

Article 7 of the U.S. Constitution describes the ratification process.  Each state was to hold public elections to choose delegates to its own Federal Convention, which would then debate and decide on the ratification of the new constitution.  As stated in the constitution, ratification by a minimum of nine states would be required to create the new government.  There was actually a lot of opposition in some of the states to the formation of a federal government.  Many of these concerns centered around equal representation, state sovereignty, and interstate access to natural resources.  Some of the states insisted that changes be made to or that amendments be added to the new constitution, as a condition for their ratification.  These amendments were added to the constitution in 1790 and 1791, and they became known as the Bill of Rights (the first twelve amendments to the constitution).

This event was the first time in World history that the people of a nation had freely participated in the choice of their own form of government.

On June 21, 1788, New Hampshire became the ninth state to ratify the constitution.  On that date, the new constitution was officially enacted, and the United States of America was born!

All of the states did eventually ratify the U.S. Constitution, but that process took until 1790.

US stamps commemorating the drafting and ratification of the constitution have appeared many times over the 20th Century, and they can be a thematic specialty in themselves.

The design of these new US stamps featured the Old Courthouse in Williamsburg, Virginia.

The Old Courthouse was the site of the reading of the Declaration of Independence, when it arrived from Philadelphia on July 25, 1776.

The 3 C. denomination stamp shown above (Sc. #854) was issued on April 30, 1939 to commemorate the 150th Anniversary of the Inauguration of George Washington as the First President of the United States.

The design of these US stamps features an artist's representation of George Washington taking the Oath of Office on the balcony of the Federal Building in New York City on April 30, 1789.

Having been a participant in the Declaration of Independence, the Continental Congress, and in the Constitutional Convention, as well as having been the Commander-in-Chief of the Continental Army during the American Revolution, George Washington was considered, even then, as the Father of his Country.  George Washington was unanimously elected President of the United States in both the 1788 and 1792 elections.

The design of this stamp features the Old Capitol Building in Iowa City.

The Iowa Territory was an incorporated territory that existed from July 1838 to December 1846, when the Southeastern portion of the territory was admitted to the United States as the State of Iowa.  The original Iowa Territory included the present day state of Iowa and portions of the present day states of South Dakota, North Dakota, and Minnesota.

The US stamps shown directly above were issued for two major American exhibitions, held beginning in 1939.


The 3 C. denomination stamp shown above, at the left (Sc. #852), was issued on February 18, 1939 to publicize the Golden Gate International Exhibition.

The design features the "Tower of the Sun" from the exhibition.

The Golden Gate International Exhibition was held on Treasure Island, in the San Francisco Bay, from February 18, 1939 through October 29, 1939 and from May 25, 1940 through September 29, 1940.  It was a World's Fair celebrating San Francisco's two newly built bridges, the San Francisco-Oakland Bay Bridge (1936) and the Golden Gate Bridge (1939).  The theme of the exposition was "Pageant of the Pacific", which was symbolized by the Tower of the Sun, a giant, 80 foot statue of "Pacifica", the Goddess of the Pacific.

The design features the Tryon and Perisphere, the symbols of the World's Fair.

The New York World's Fair was held at Flushing Meadows, Queens, New York from April 30, 1939 through October 31, 1940.  It was the second largest World's Fair of all time, exceeded only by the St. Louis - Louisiana Purchase Exhibition of 1904.  Many countries around the World participated in the World's Fair, and in the two years it was open, over 44 million people visited its exhibits.

Many of the countries participating in the World's Fair issued their own coins, postage stamps, and other ephemera honoring their nation's participation in the event.  Collecting stamps, covers, and memorabilia of the 1939 New York World's Fair offers the possibility of a thematic collection that could easily develop into a philatelic specialty by itself.

The 3 C. denomination US stamp shown above (Sc. #855) was issued on June 12, 1939 to commemorate the 100th Anniversary of Baseball, considered the National Sport of the United States.

The design features a depiction of a sandlot baseball game.

The design features portraits of Theodore Roosevelt, George W. Goethals, and a ship in the Gaillard Cut section of the Panama Canal.

The 3 C. denomination US stamp shown above (Sc. #858) was issued on November 2, 1939 to celebrate the 50th Anniversary of the Statehood of North Dakota, South Dakota, Montana, and Washington.

The design features a map of the four states, which were admitted to the United States during 1889.


Return to Modern US Stamps from
Commemoratives of 1938-1939 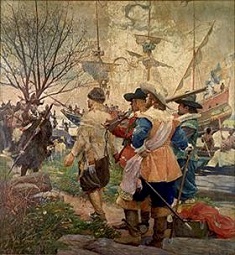 Landing of the First Swedish
and Finnish Settlers in America

The 3 C. denomination stamp shown above (Sc. #836) was issued on June 27, 1938 to commemorate the 150th Anniversary of the founding of the Swedish-Finnish Settlement at Wilmington, Delaware.

The design features the painting, "Landing of the First Swedish and Finnish Settlers in America", by Stanley M. Arthurs (1877-1950).

The 3 C. denomination stamp shown above (Sc. #837) was issued on July 15, 1938 to celebrate the 150th Anniversary of the Colonization of the Northwest Territory.

The stamp pictures the statuary group "Colonization of the West" by Gutzon Borglum (1867-1941).

The statue is located in Marietta, Ohio, the location of the first permanent settlement in the Northwest Territory in 1788.

The 3 C. denomination US stamp shown above (Sc. #857) was issued on September 25, 1939 to commemorate the 300th Anniversary of Printing in Colonial America.