Commemorative US stamps issued in the later part of 1936, continuing through 1937, featured celebrations of the US Armed Forces, the US Constitution, and contemporary US territories. 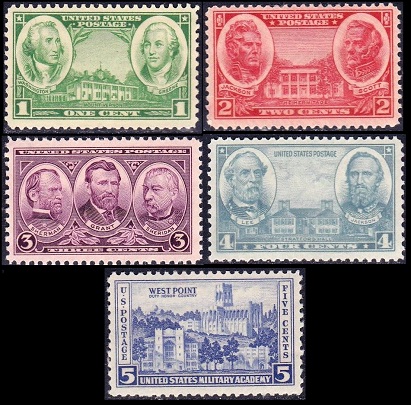 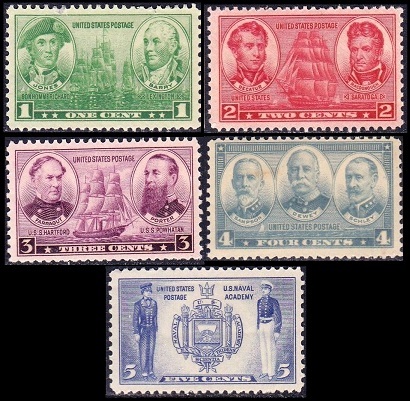 Four of the designs of these US stamps feature portraits of famous American naval officers, with three of the stamps having the names of the vessels they commanded below each portrait, as follows: 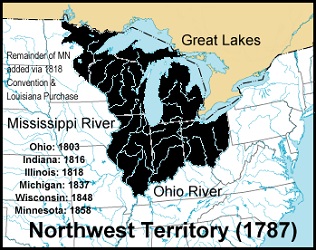 The 3 C. denomination stamp shown above (Sc. #795) was issued on July 13, 1937 to commemorate the Adoption of the Ordinance of 1787 and the Creation of the Northwest Territory.

The stamp shows a map of the Northwest Territory and portraits of Manasseh Cutler and Rufus Putnam.

The Ordinance of 1787, also known as the Northwest Ordinance, was an act of the Congress of the American Confederation, passed on July 13, 1787.  This was the first effort by the new American government at territorial expansion.  The ordinance created the Northwest Territory from lands between the Canadian border and the Ohio River, on the North and South, and between the Appalacian Mountains and the Mississippi River on the East and West.  This territory included what would eventually become the modern states of Ohio, Indiana, Illinois, Michigan, Wisconsin, and Minnesota.

Manasseh Cutler (1742-1823) was an American clergyman, a chaplain during the Revolutionary War, and later, a member of the House of Representatives from Massachusetts.  As the leader of the Ohio Company of Associates, whose goal was to purchase lands in the proposed territory, he had a leading role in the drafting of the Ordinance of 1787.

Rufus Putnam (1728-1834) was a colonial military officer during the French and Indian War and a General in the Continental Army during the Revolutionary War.  He was one of the organizers of the Ohio Company of Associates, and he was instrumental in the initial settling of the Northwest Territory. 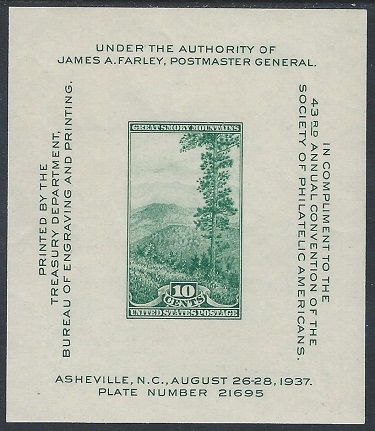 The imperforate souvenir sheet shown above (Sc. #797) was issued on August 26, 1937 for the Annual Convention of the Society of Philatelic Americans, held in Asheville, North Carolina from August 26 through August 28, 1937.  These were printed in plates of 36 souvenir sheets.

This souvenir sheet features a reproduction, in bluish green, of the 10 C. denomination stamp from the National Parks Issue of 1934. 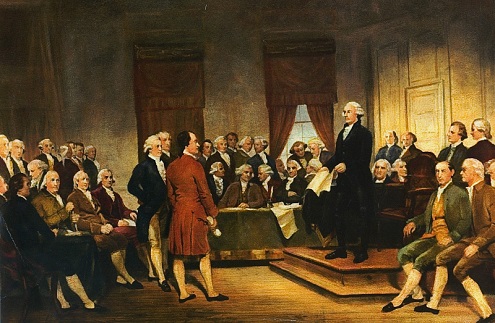 Signing of the U.S. Constitution
Painting by Junius Brutus Stearns (1810-1885)

The 3 C. denomination stamp shown above (Sc. #798) was issued on September 17, 1937 to commemorate the 150th Anniversary of the Signing of the U.S. Constitution.  The stamp features the famous painting by Junius Brutus Stearns (shown above), now located in the Virginia Museum of Fine Arts.

After nearly four months of debate, the final text of the new constitution was completed.  On September 17, 1787, following a speech by Benjamin Franklin, 39 delegates at the Constitutional Convention signed and then submitted the constitution to the Congress of the Confederation for ratification.

The four US stamps shown above (Sc. #799-802) were issued to honor the four overseas territories of the United States.

In the order of appearance, from top to bottom, the designs of these US stamps are as follows:


Return to Modern US Stamps from
Commemoratives of 1936-1937

The 3 C. denomination stamp shown above (Sc. #796) was issued on August 18, 1937 to commemorate the 350th Anniversary of the Birth of Virginia Dare, the first child born in America to English parents, and of the Establishment of the Roanoke Island Settlement.

The stamp shows an artist's conception of Virginia Dare, with her parents, Aranias and Eleanor Dare.

The Roanoke Colony was a late 16th Century attempt by Queen Elizabeth I to establish a permanent English settlement in the New World.

When White arrived, the colonists were gone and all the structures had been dismantled.  There were no signs of any struggle or battle there, and to this day, no evidence has ever been found, indicating what happened to the colonists at Roanoke Island.