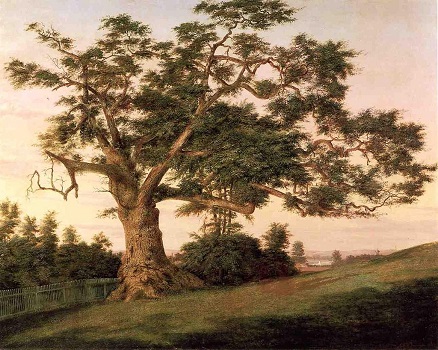 The 3 C. denomination commemorative stamp shown above, at the left (Sc. #772), was issued on April 26, 1935 to celebrate the 300th Anniversary of the Settlement of Connecticut.

The design of these US stamps features the famous Charter Oak, based on the 1857 painting by Charles De Wolf Brownell.

The Charter Oak was a centuries-old oak tree on the Wyllys Estate, near modern-day Hartford, Connecticut, until it was felled during a storm in 1856.  According to tradition, Connecticut's Royal Charter of 1662 was hidden in a hollow of the tree to prevent its confiscation by the English Governor-General.  The oak tree later became a symbol of the struggle for American independence. 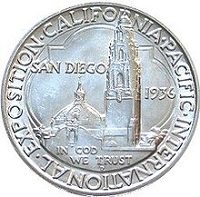 The 3 C. denomination commemorative stamp shown above, at the right (Sc. #773), was issued on May 29, 1935 to publicize the California Pacific International Exhibition, held in San Diego from May 29 through November 11, 1935 and from February 12 through September 9, 1936.

The 3 C. denomination commemorative stamp shown above, at the left (Sc. #775), was issued on November 1, 1935 to publicize the upcoming 100th Anniversary of Michigan Statehood in 1937.

The design of the stamp features flags and Michigan State Seal.  Michigan has a wealth of national resources, and, with almost 65,000 inland lakes and ponds, it is one of the most popular US destinations for recreational boating.


The 3 C. denomination commemorative stamp shown above, at the right (Sc. #776), was issued on March 2, 1936 to celebrate the 100th Anniversary of Texas' Independence from Mexico.

The design of these US stamps features a view of the Alamo in San Antonio, Texas, and the portraits of Sam Houston and Stephen F. Austin.

Samuel "Sam" Houston (1793-1863) was an American politician and soldier, most noted for his role in bringing Texas into the United States as a state.  He was an active participant in the Texas Revolution and became the first President of the Republic of Texas, following its independence from Mexico.  During his long political career, he was a member of the House of Representatives, a senator, and the governor of both Tennessee and the State of Texas.

Stephen F. Austin (1793-1836) was an American empresario or colonization pioneer.  The Mexican expression "empresario", referred to a person that was allowed to settle on Mexican lands, in exchange for recruiting and taking responsibility for the new settlers.

Stephen Austin was born in Virginia, but he lived most of his life in Missouri and Arkansas.  Known as the Father of Texas, he had an arrangement with the government of Mexico to colonize the Mexican Province of Texas.  In 1825, he brought 300 families from the United States to the region.  Following the Texas Revolution and its subsequent independence from Mexico in 1836, Austin was appointed by Sam Houston to be the Secretary of State for the new Republic of Texas, but after only two months in office, he died of pneumonia.

The 3 C. denomination commemorative stamp shown above, at the left (Sc. #774), was issued on September 30, 1935 to celebrate the Dedication of the Boulder Dam (Hoover Dam).

The design of the stamp features a view of Boulder Dam, with Lake Mead in the background and the Colorado River in the foreground.  It was dedicated on September 30, 1935 by President Franklin Roosevelt, and later re-named to Hoover Dam, in honor of former president Herbert Hoover.


The 3 C. denomination commemorative stamp shown above, at the right (Sc. #777), was issued on May 4, 1936 to celebrate the 300th Anniversary of the Settlement of Rhode Island.

The design of the stamp features a statue of Roger Williams.

Roger Williams (1603-1683) was an English Protestant theologian, who was an early proponent of religious freedom and the separation of church and state.  In 1636, he created the colony of Providence Plantation, which provided a refuge for religious minorities.  Williams started the first Baptist Church in America.  He was a student of Native American languages and an advocate for fair dealings with the Native Americans.  He was also one of the first abolitionists in North America, having organized the first attempt to prohibit slavery in the original thirteen American colonies. 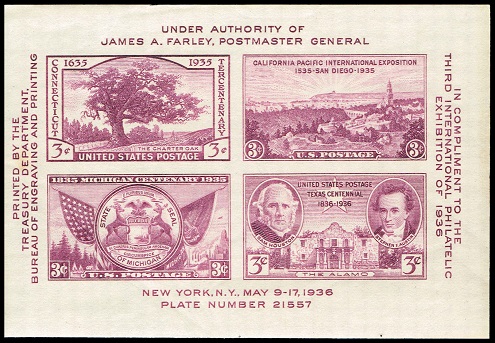 The imperforate souvenir sheet shown above (Sc. #778) was issued on May 9, 1936 for the Third International Philatelic Exhibition (TIPEX), held in New York City from May 9 through May 17, 1936.  These were printed in plates of 120 subjects, separated into thirty panes of four imperforate US stamps.

This souvenir sheet features imperforate reproductions of four of the commemorative US stamps issued during 1935 and 1936.

The 3 C. denomination commemorative stamp shown above, at the left (Sc. #782), was issued on June 15, 1936 to celebrate the 100th Anniversary of the State of Arkansas.

The design of the stamp features a view of the Arkansas Post, and the old and new State Houses.


The 3 C. denomination commemorative stamp shown above, at the right (Sc. #783), was issued on July 14, 1936 to celebrate the 100th Anniversary of the Opening of the Oregon Territory.

The design of the stamp features a map of the Oregon Territory.


Return to Modern US Stamps from
Commemoratives of 1935-1936