Commemorative US stamps were issued during 1933 to mark several significant events.  Even though these stamps were commemorative, their intended purpose was for paying postage on business and personal letters.

The year 1933 saw the birth of another kind of postage stamp issue though .... Philatelic Issues .... souvenir postage stamp products intended to generate revenue from stamp collectors!  This time, it was in the form of Philatelic Exhibition souvenir sheets.

James Oglethorpe (1696-1785) was a British general, Member of Parliament, philanthropist, and the founder of the Colony of Georgia. As a social reformer, he hoped to resettle Britain's poor, especially those in debtor's prisons, in the New World.  Oglethorpe arrived from England on February 12, 1733, and he personally supervised the establishment of the new colony.

On April 19, 1783, General George Washington issued an official order, containing the Proclamation of Peace, officially marking the cessation of hostilities in the American Revolutionary War.

The two stamps shown above (Sc. #728-29) were issued May 25, 1933 for the Century of Progress International Exposition and to celebrate the 100th Anniversary of the Incorporation of the City of Chicago.

The 1 Cent denomination stamp shows the Restoration of Fort Dearborn.  Fort Dearborn was constructed on the Chicago River near Lake Michigan in 1803, the site of the present day city of Chicago.

The 3 Cent denomination stamp shows the Federal Building in Chicago.

The Century of Progress International Exposition was the name of the World's Fair held in Chicago from 1933 to 1934 to celebrate the 100th anniversary of the city. The theme of the fair was technological innovation. Its architectural symbol was the Sky Ride, a transporter bridge perpendicular to the shore on which one could ride from one side of the fair to the other.

For a web page article on the flight of the German airship Graff Zeppelin to the Century of Progress Exposition in 1933, please click here. 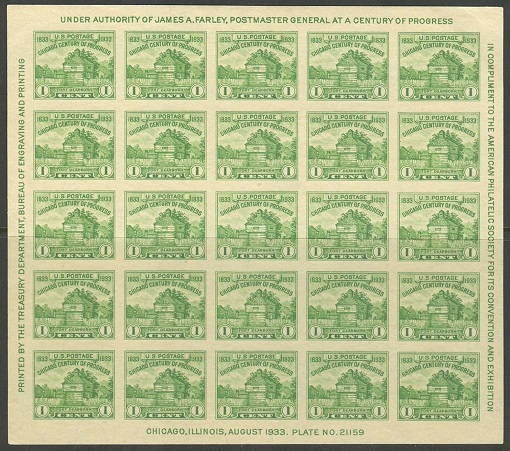 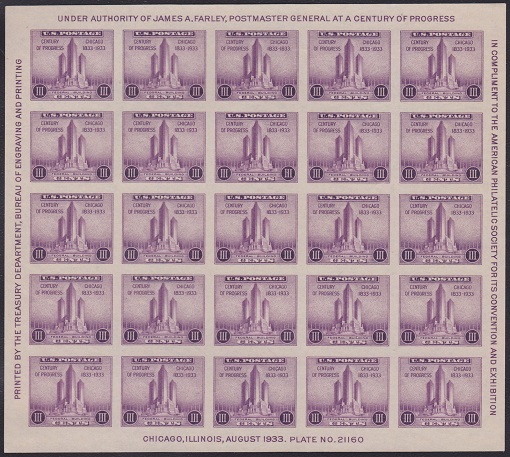 These two imperforate souvenir sheets (Sc. #730-31), containing 25 stamps each, were issued on August 25, 1933 for the American Philatelic Society's Convention and Exhibition in Chicago.

This 3 Cent stamp features a group of workers.

The National Recovery Act was a law passed by the United States Congress in 1933 to authorize the President to regulate industry in an attempt to raise prices and to stimulate economic recovery. The law was widely hailed in 1933, but by 1934, business opinion had soured. The NRA was abolished by the Supreme Court in 1935.

This stamp (Sc. #733) was issued on October 9, 1933, in connection with the Byrd Antarctic Expedition of 1933 and for use on letters mailed through the Little America Post Office at the base camp of the expedition in Antarctica.  Though this is a 3 Cent postage stamp, the actual postage for letters traveling to the Little America Post Office was 53 Cents.

This was a philatelic issue, intended primarily for stamp collectors, and the stamps were only sold through the Philatelic Bureau in Washington, D.C.

The 3 Cent stamp shows a Map of the World.  The dotted lines on the map show the routes of Admiral Byrd's polar expeditions.

This US stamp (Sc. #734) was issued October 13, 1933 to commemorate the 150th Anniversary of the Granting of U.S. Citizenship to General Tadeusz Kosciuszko.

The 5 Cent denomination stamp shows the Statue of General Kosciuszko, which is atop the Kosciuszko Monument at West Point.

Andrzej Tadeusz Bonawentura Kosciuszko (1746-1817) is a national hero in Poland, Lithuania, Belarus, and the United States.  On learning about the outbreak of the American Revolutionary War, Kosciuszko moved to North America in 1776, where he took part in the fighting as a Colonel in the Continental Army. An accomplished military architect, he also built state-of-the-art fortifications, perhaps most notably at West Point, New York. In 1783, in recognition of his services, the Continental Congress promoted him to brigadier general.


Return to Modern US Stamps from
Commemoratives of 1933