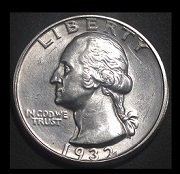 For commemorative US stamps (and US coins), the BIG EVENT of 1932 was the 200th anniversary of the birth of George Washington.

Another memorable event of 1932 was that both the Winter and Summer World Olympic Games were held in the United States, prompting the issue of additional commemorative stamps.

The Bureau of Engraving and Printing had considered issuing a long set of commemorative stamps through the $5.00 denomination for the George Washington Bicentennial.  But, remembering back to the public dissatisfaction with the high cost of the Columbian and Trans-Mississippi commemorative stamps, the decision was made to be much more conservative with the denominations of these new commemoratives.

Another thing to be considered was that much of the country was still feeling the aftereffects of the Great Depression, which began in late 1929.  The issue of an expensive set of high-denomination commemorative stamps, in 1932, would have probably caused tremendous public resentment. 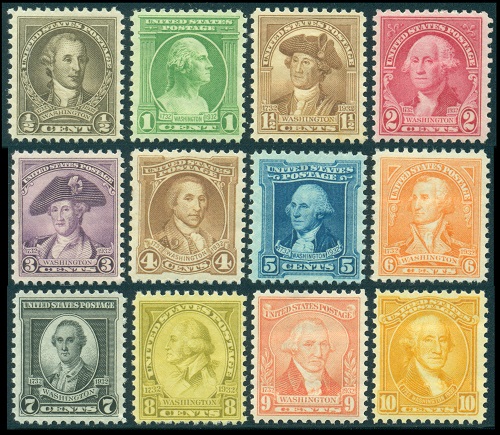 These new Washington Bicentennial stamps are printed in same colors used for the same denominations of the 1926 Rotary Press definitive postage stamps.  The frames are unique to each of the denominations, and the vignettes feature various portraits of George Washington, made during his lifetime.

These stamps were all printed on the Rotary Press, issued in panes of 100, and they are all perforated 11 x 10-1/2.  The vignette designs are as follows:

Though these US stamps were made over 80 years ago, they are still plentiful and inexpensive.  However, well centered examples are difficult to obtain, and those can get very pricey.

The Winter Olympics did much to promote the image of Lake Placid as a winter resort, and they again hosted the Winter Olympics in 1980.  Seventeen countries participated, and the US won the medal count, with 6 Gold, 4 Silver, and 2 Bronze medals.  New York Governor Franklin D. Roosevelt, who was elected President of the United States later in the year, opened the games.

This 2 Cent stamp features a boy and a girl planting a tree for Arbor Day.

The 3 Cent denomination stamp ( oops, looks like the letter postage rate went up! ) shows an Olympic Runner at the Starting Mark.

The 5 Cent denomination stamp shows the famous Ancient Greek statue "Discobolus" or "Discus Thrower", c. 450 B.C., with a World Globe in the background.

With the Summer Olympics being held during the worldwide Great Depression, many nations and athletes were unable to pay for the trip to Los Angeles. Fewer than half the participants of the 1928 Summer Olympics in Amsterdam returned to compete in 1932. Even the President of the United States, Herbert Hoover, failed to attend the event.

The Summer Olympics were officially opened by Charles Curtis, the Vice President of the United States. 37 countries participated in the Los Angeles Olympics.  The medal count was won by the United States, with 41 Gold, 32 Silver, and 30 Bronze medals.

The 3 Cent stamp shows the likeness of William Penn.

William Penn was an English real estate entrepreneur, philosopher, early Quaker, and the Founder of the Province of Pennsylvania.  He was a champion of democracy and religious freedom noted for his peaceful relations with the Native Americans.  Under his direction, the city of Philadelphia was planned and developed.

The 3 Cent stamp features a portrait of Daniel Webster.

Daniel Webster (1782-1852) was an American Statesman of the 19th Century, known as the "Defender of the Constitution".  He served as a Representative from Massachusetts and as the Senator from Massachusetts in the years leading up to the Civil War.  He was also the Secretary of State during the William Henry Harrison and Millard Fillmore administrations.


Return to Modern US Stamps from
Commemoratives of 1932