More commemorative US stamps were issued for important events in early American history during 1930 and 1931.

This 2 Cent stamp features the Seal of the Massachusetts Bay Colony as its central design.

The Massachusetts Bay Colony was an English settlement on the east coast of North America during the 17th century.  The colony was  situated around the present-day cities of Salem and Boston. The territory administered by the colony included much of present-day central New England, including portions of the States of Massachusetts, Maine, New Hampshire, Rhode Island, and Connecticut.

The 2 Cent stamp features the Statue of Colonel George Washington in Braddock, Pennsylvania, by the sculptor Frank Vittor (1888-1968).

The subject of this stamp can be a little confusing.  George Washington, at the time, had left the Virginia Militia, and he was not a Colonel.  He was actually an aide to British Major General Edward Braddock, and an officer in the British Army, at the time of the Battle of Braddock's Field.

I don't want to write a book here, but some clarification is needed.

The Battle of Braddock's Field, also known as Battle of the Monongahela, was part of the French and Indian War of 1754 to 1763.

In 1755, a British expeditionary force led by Major General Edward Braddock, set out to capture Fort Duquesne in Western Pennsylvania and then push on to other forts, with the eventual goal of taking Fort Niagara. Fort Duquesne was located at the confluence of the Allegheny and the Monongahela rivers and controlled access to the Ohio river valley.  Braddock's army consisted mainly of British regulars, along with a contingent of American Colonial soldiers from Maryland, Virginia, the Carolinas and others.

On July 9, 1755, less than 10 miles from their goal, Braddock's army had a surprise encounter with the French and Indians in a dense wooded area.  The French and Indian forces routed the British who suffered enormous casualties. Braddock himself was mortally wounded and died several days later.

It seems that a young colonial officer from Virginia was instrumental in organizing a retreat, saving what was left of Braddock's army, and rescuing General Braddock from the battlefield. His name was George Washington.

This US stamp (Sc. #689) was issued on September 17, 1930 to commemorate the 200th Anniversary of the Birth of Revolutionary War General von Steuben.

Friedrich Wilhelm August Heinrich Ferdinand von Steuben (1730-1794), also referred to as Baron von Steuben, was a Prussian-born military officer who served as a Major General during the American Revolutionary War.  He is credited with being one of the fathers of the Continental Army, in teaching them the essentials of military drills, tactics, and disciplines, and he was General George Washington's chief-of-staff during the final years of the Revolutionary War.

The 2 Cent stamp features the portrait of General Pulaski, with the flags of the United States and Poland at the upper sides.

Kazimierz Michał Wacław Wiktor Pułaski (1745-1779) was a Polish nobleman, soldier, and military commander, who has been called "the father of the American cavalry".

Pulaski emigrated to North America to help in the cause of the American Revolutionary War. He distinguished himself throughout the revolution, most notably when he saved the life of George Washington. Pulaski became a General in the Continental Army, created the Pulaski Cavalry Legion, and reformed the American cavalry as a whole. At the Battle of Savannah, while leading a daring charge against British forces, he was gravely wounded and died shortly afterwards.

This 2 Cent stamp shows an allegory of "The Greatest Mother", a nurse with a world globe in front of her.

The American Red Cross was founded on May 21, 1881 by Clara Barton (1821-1912), a teacher, nurse, and humanitarian.  The organization primarily helps victims of wars and disasters. 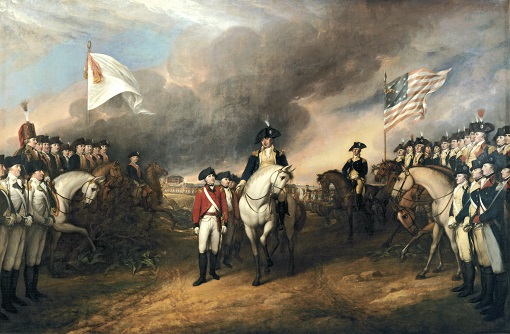 Surrender of Lord Cornwallis at Yorktown
In the Rotunda of the U.S. Capitol Building
by John Trumbull c. 1820

The US stamp shown above (Sc. #703) was issued on October 18, 1931 to commemorate the Surrender of Cornwallis at Yorktown.

The Siege of Yorktown, ending on October 19, 1781, was a decisive victory by a combined force of the American Continental Army, the French Army, and the French Navy over a British Army commanded by Lieutenant General Lord Cornwallis.  The siege was the last major battle of the Revolutionary War, as the capture of Lord Cornwallis and his army prompted the British government to negotiate an end to the conflict.  The negotiations culminated in the Treaty of Paris in 1783, with the British government recognizing the United States as a free and sovereign nation.


Return to Modern US Stamps from
Commemoratives of 1930-1931