New commemorative US stamps were issued for three important anniversaries during 1924 and 1925. 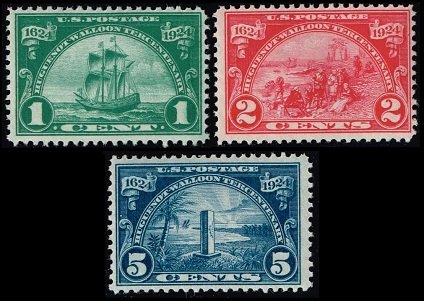 The three commemorative stamps shown above (Sc. #614-16) were issued on May 1, 1924 to celebrate the 300th Anniversary of the Settling of the Walloons and to Honor the Huguenots.

The 1 Cent denomination depicts the ship "Nieu Nederland" that brought the Walloons to their new settlement in 1624.  The settlement, now in the State of New York, was called "New Netherlands".

The 2 Cent denomination depicts the Landing of the Walloons at Fort Orange (Albany, N.Y.).

The 5 Cent denomination features a sketch of the Jan Ribault Monument in Mayport, Florida.  The monument is a silent reminder of the time that France battled Spain over the colonization of Florida.  In 1562, Jean Ribault (1520-1565) led an expedition of French Huguenots to Florida, and they established a colony called "Fort Caroline" in what is now Jacksonville, Florida.  The French (protestant) settlers were all slaughtered by Spanish (Catholic) soldiers in 1565.

The Huguenots were members of the Protestant Reformed Church of France during the 16th and 17th Centuries. 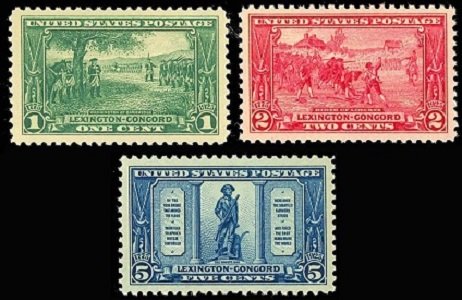 The three impressive-looking commemorative US stamps shown above (Sc. #617-19) were issued on April 4, 1925 to commemorate the 150th Anniversary of the Battle of Lexington-Concord, which launched the American Colonial struggle for independence from the British Empire.

The 1 Cent denomination stamp - Washington at Cambridge - shows General George Washington taking command of the Continental Army at Cambridge.  This event actually happened two months after the Battle of Lexington-Concord.

This event was immortalized in the verses of the "Concord Hymn" by Ralph Waldo Emerson (1803-1882), a poem written for the 1837 dedication of the Obelisk monument at the site of the American Revolutionary War battle in Concord, Massachusetts ....

By the rude bridge that arched the flood,
Their flag to April’s breeze unfurled,
Here once the embattled farmers stood,
And fired the shot heard round the world.

The foe long since in silence slept;
Alike the conqueror silent sleeps;
And Time the ruined bridge has swept
Down the dark stream which seaward creeps.

On this green bank, by this soft stream,
We set to-day a votive stone;
That memory may their deed redeem,
When, like our sires, our sons are gone.

Spirit, that made those heroes dare,
To die, and leave their children free,
Bid Time and Nature gently spare
The shaft we raise to them and thee.

The 5 Cent denomination stamp - The Minute Man - shows the famous  statue, "The Minute Man", by Daniel Chester French (1850-1931).  The statue was erected at Concord, Massachusetts in 1875, the 100th anniversary of the Battle of Lexington-Concord.  The panels shown on the stamp, at the sides of the statue, contain the first verse of Ralph Waldo Emerson's famous poem.

The two US stamps shown above (Sc. #620-21) were issued on May 18, 1925 to commemorate the Arrival of the First Immigrants from Norway on board the Sloop Restaurationen on October 9, 1825.


Return to Modern US Stamps from
Commemoratives of 1924-1925