New US stamps for the prepayment of fourth class mail parcel postage were officially issued at the beginning of 1913.  These are the only parcel post stamps ever issued by the United States Government.

The US Congress approved new fourth class rates for parcels on August 24, 1912, and these new rates were to be prepaid by distinctive parcel post stamps.  The new parcel postage stamps were shipped to post offices in December 1912, though they were not supposed to be officially used until January 1, 1913.  There was no prohibition on the early sale of these new US stamps, and many of them were used during December 1912.  As of January 1, 1913, regular definitive postage stamps were no longer allowed to be used for mailing parcels.

The twelve, carmine rose colored, parcel post stamps shown directly below were officially issued on January 1, 1913.  These parcel post US stamps were all engraved, perforated 12, and they were printed on single-lined USPS watermarked paper in panes of 45 stamps.

The designs feature American industries that frequently mailed parcels and modes of mail transportation.  These are popular with many stamp collectors, as they provide a contemporary pictorial view of the United States, just after the beginning of the 20th Century.  Due to the thematic subjects pictured in these stamps, they also adorn thematic stamp collections around the World.

The individual design descriptions follow each of the images below: 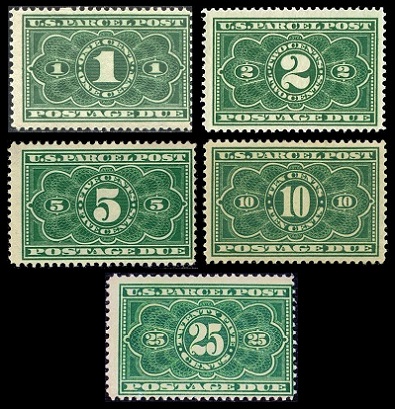 The five parcel post postage due US stamps shown above were also issued on January 1, 1913.  Their printing attributes are the same as the regular parcel post stamps, except that these stamps were printed in dark green or yellowish green.


Return to Modern US Stamps from
Parcel Post Stamps 1913