The 1909 commemoratives are all printed on Double-Lined USPS Watermarked paper, and they are all either Perforated 12 or imperforate.

The 1913 - 1915 Panama-Pacific commemorative stamps are all printed on Single-Lined USPS Watermarked paper, and they were either Perforated 12 or Perforated 10.

The three commemorative stamps shown above (Sc. #367-69) were issued on February 12, 1909, to celebrate the 100th Anniversary of the Birth of Abraham Lincoln, the 16th President of the United States.

The designs of these stamps are very similar to those of the 1908 2 Cent denomination definitive postage stamp, with the exception that these show the right-facing bust of Abraham Lincoln, instead of that of George Washington.  The bust of Lincoln is a detail of a statue in Grant Park, Chicago, Illinois, by Augustus St. Gaudens (1848-1907).

A small quantity of the perforated 12 stamp was also printed on bluish-gray paper.  It is shown above, at the right (Sc. #369). 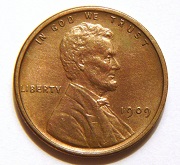 The U.S. Mint was also active in this celebration, issuing a new 1 Cent coin.  The Lincoln Head 1 Cent coin was continued, and over 100 years later, it is STILL the official 1 Cent coin of the United States.

The two US stamps shown above (Sc. #370-71) were issued on June 1, 1909 at the Alaska-Yukon-Pacific Exposition, held at Seattle, Washington.  The stamps were issued in both perforated and imperforate format.

They depict a left facing portrait of William H. Seward (1801-1872), the Secretary of State during President Andrew Johnson's administration, who is famous for the 1867 purchase of the Alaskan Territory from the Russian Empire.

The Alaska-Yukon-Pacific Exposition was a World's Fair, held in Seattle, Washington from June 1 through October 16, 1909.  Its purpose was to publicize the development of the Pacific Northwest.  80,000 visitors attended on opening day, and by the time the World's Fair closed, it had drawn about 3.7 million visitors.  The grounds of the exposition eventually became the campus of the University of Washington.

The two US stamps shown above (Sc. #372-73) were issued on September 25, 1909, the opening day of the Hudson-Fulton Celebration.  The stamps, printed in both perforated and imperforate format, commemorate the 300th Anniversary of the Discovery of the Hudson River by Dutch explorer Henry Hudson (c. 1565-1611),  and the 100th Anniversary of the development of the steamship by Robert Fulton (1765-1815).

The stamps depict Hudson's ship, "The Half Moon", and Fulton's steamship.

The Hudson-Fulton Celebration took place from September 25 through October 9, 1909 in New York and New Jersey.  Organizers used the event, not only to display the success of the two men, but also to promote the status of New York City as a "world city". 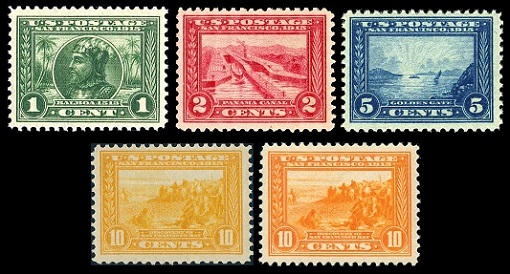 The commemorative US stamps shown above were issued between January and August 1913 to promote the upcoming Panama-Pacific Exposition, a World's Fair, to be held in San Francisco, California from February 20 through December 4, 1915.  These US stamps issued  in 1913 (Sc. #397-00, #400A) for the exposition were all perforated 12.

Their Designs are as follows: 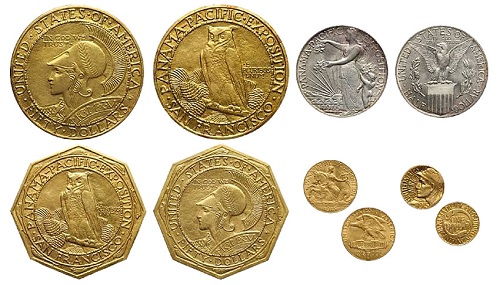 The United States Mint also issued four commemorative coins for this notable event.  These included a commemorative Half Dollar coin in SILVER, and commemorative $1.00, $2.50, and $50.00 (round and octagonal) coins in GOLD.

The exposition featured exhibits from 24 different countries, and it drew almost 19 million visitors.


Return to Modern US Stamps from
Commemoratives of 1909-1915