New commemorative US stamps were issued during 1904-1907 for two World's Fairs, the first at St. Louis, Missouri and the second at Jamestown, Virginia.

The Louisiana Purchase Exposition, also known as the St. Louis World's Fair, was an international exposition held in St. Louis, Missouri in 1904.  The purpose of the exposition was to celebrate the 100th Anniversary of the 1803 Louisiana Purchase. It was delayed from a planned opening in 1903, to allow for full-scale participation by more states and foreign countries. The exposition opened April 30, 1904 and closed December 1, 1904.

Exhibits were staged by 62 foreign nations, the United States government, and 43 of the 45 U.S. states. There were also over 50 concession-type amusements, providing educational and scientific displays, exhibits and imaginary 'travel' to distant lands, historical displays, and local entertainment.  Almost 20,000,000 visitors attended the Louisiana Purchase Exposition. 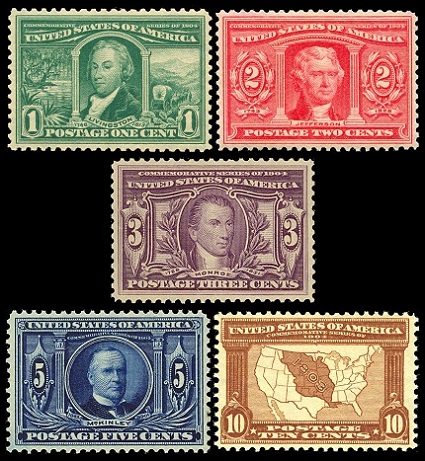 The Jamestown Exposition was a World's Fair, whose purpose was to commemorate the 300th anniversary of the founding of Jamestown, Virginia Colony, the first permanent European settlement in the New World.  The exposition was held at Sewell's Point on Hampton Roads, in Norfolk, Virginia from April 26 to December 1, 1907.

Due to poor planning, the Jamestown Exposition was plagued by the lack of facilities on opening day, bad weather, low attendance, and racial controversy.

On opening day, many of the electric lights did not work, the recreation area was not ready, much of the ground in the center of the fair was muddy, due to the weather, and only 14 of the planned 38 exposition buildings were completed.  These problems WERE eventually worked-out, but the delay hurt the Exposition.

A controversial feature of the exposition was its "Negro Building", designed by W. Sydney Pittman, with displays showing the progress of African Americans.  Many African-American visitors found this offensive and felt that it singled them out as being "separate in practically all things", but other African-American visitors, including Booker T. Washington, found the effort very flattering.

And then there were the segregationist laws of the Southern State of Virginia.  African-Americans were welcome to attend the exposition, but they could not enter any of the exposition's restaurants.

The promoters made a valiant effort in putting on the exposition, but in the end, it was a financial failure, having losses of several million dollars.  Visitor attendance was only 3,000,000, a fraction of the totals anticipated.

Naval officials in Norfolk urged the redevelopment of the exposition site, with its existing infrastructure, as a Naval Base.  On June 28, 1917, President Woodrow Wilson set aside $2.8 million for land purchase and the erection of storehouses and piers for what was to become a navy base.  The Hampton Roads Naval Base is now located on the site.  Many of the original buildings from the 1907 exposition are still being used as officers quarters on the modern naval base.

The commemorative US stamps shown below (Sc. #328-30) were issued on April 26, 1907 to celebrate the 300th Anniversary of the Founding of Jamestown.

Captain John Smith was a leader of the Virginia Colony, based at Jamestown, between September 1608 and August 1609  He led an exploration along the rivers of Virginia and the Chesapeake Bay, and he was the first English explorer to map the Chesapeake Bay Area and New England.

Captain Smith's strength of character and determination overcame problems presented from the hostile Powhatan native Americans, the wilderness, and the troublesome and uncooperative English settlers.

Pocahontas was notable for her association with the colonial settlement at Jamestown, Virginia. She was the daughter of Powhatan, the chief of a network of tributary tribal nations in the Tsenacommacah, encompassing the Tidewater region of Virginia. In a well-known historical anecdote, she is said to have saved the life of Englishman John Smith, in 1607, by placing her head upon his own when her father raised his war club to execute him.

Pocahontas was captured by the English during Anglo-Indian hostilities in 1613. During her captivity, she converted to Christianity and took the name Rebecca. When the opportunity arose for her to return to her people, she chose to remain with the English. In April 1614, she married tobacco planter John Rolfe, and she lived by the name Rebecca Rolfe until her death.


Return to Modern US Stamps from
Commemoratives of 1904-1907