Definitive US stamps were completely redesigned by the US Bureau of Engraving in 1902 and 1903.  They were all engraved on watermarked double-lined USPS paper, and they were perforated 12.  They are all shown in the scans below (Sc. #300-313).

Philatelists know this new series of definitive postage stamps as the Second Bureau Issue.  These new definitive stamps are very ornate, with each of them having different frames.  They have sometimes been referred to as the Gingerbread Issue, due to the complex and imaginative engraving around each of the vignettes.

The stamps are all inscribed "Series 1902", however, all but two of the denominations in this set were issued during 1903.

The 1 Cent and 2 Cent denominations also come in booklet panes of six stamps.  They are scarce and a bit pricey.

Martha Washington, the wife of President George Washington and the first First Lady of the United States, replaced General William Sherman on the 8 Cent denomination in 1902.  She was the second woman, after Queen Isabella of Spain in 1893, and the first American woman, to appear on a US stamp.

All known examples of the imperforate 4 Cent denomination (Sc. #314A) were perforated with large oblong perforations (Shermack Type III) at the sides.

The Second Bureau Issue was favorably received by the public, however, many people complained about the originally issued 2 Cent George Washington denomination, because of the red shading on his nose and cheek.

These 2 Cent denomination US stamps, during their production period, approximately 1903-1911, were printed in a number of different colors.
The listed colors, noted in the Scott Catalog, are Carmine, Bright Carmine, Carmine Lake, Lake, Carmine Rose, and Scarlet.

These stamps also come in two types. For further details, please refer to the Scott US Specialized Catalog.

Type I - the outer leaf to the left of the left hand numeral "2" breaks the outer frame line.

Type II - the leaf does not break the frame line.

The new 2 Cent stamps were also issued booklets containing panes of six stamps.  The booklet panes of this issue also come in most of the colors noted above.  By this time, the sales of stamps in booklets was becoming more commonplace, thus, they are reasonably affordable for most US stamp collectors. 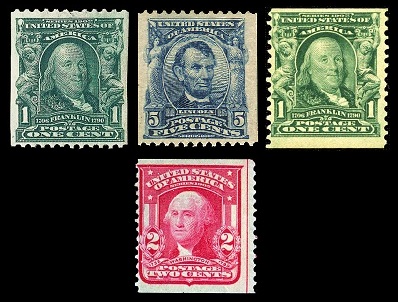 Beginning in early 1908, the US Post Office Department began experimenting with the production of postage stamps printed in coil rolls for use in vending machines.

The 1 Cent and 5 Cent denominations were printed in vertical coils, perforated 12 horizontally.  The 1 Cent and 2 Cent denominations were also printed in horizontal coils, perforated 12 vertically.  Examples of authenticated coils from major public auctions are shown in the scan above (Sc. #316-18, #322).  Their combined 2018 catalog value is $142,000.00.

It may be safely assumed that any unauthenticated examples of these coil stamps are probably FORGERIES!  Jumbo margin sheet stamps, imperforate stamps, and even stamps from the booklet panes have been altered and passed-off as the coils.  The government-issued coil stamps are all exceedingly RARE.  They rarely appear on the market, and then only occasionally are offered by the major auction houses.  Examples of these coil stamps MUST BE AUTHENTICATED!

If the collector REALLY MUST have examples of these coil stamps in their US Stamp Collection, there IS a solution.

Beginning in 1906, commercial vending machine manufacturers began buying imperforate panes of stamps from the US Post Office Department.  These companies then cut / pasted the imperforate stamps into coils, using many different types of separation, and then they sold them in their vending machines.  These are actually COIL stamps in all respects.  They just weren't government manufactured.  An example of one of these private vending coils is illustrated by the scan of the imperforate 4 Cent denomination stamp shown above.  These privately produced coil stamps, whether in singles or in pairs, are actually very affordable.  For details, please see the Vending & Affixing Machine Perforations section of the Scott US Specialized Catalog.