New pictorial US stamps were issued during 1901 for the Pan American Exposition. 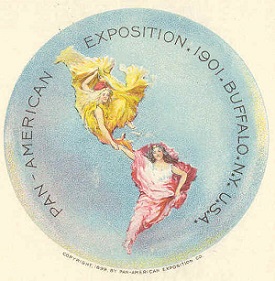 The Pan American Exposition was a World's Fair held at Buffalo, N.Y.  from May 1 through November 2, 1901.  The logo of the exposition, in the public domain now, is shown at the left.

The "Pan American" theme was carried throughout the event with the slogan "commercial well being and good understanding among the American Republics."  Tickets to the event cost $0.25 in 1901, and during the time the Pan American Exposition was open to the public, it drew about 8,000,000 visitors.

Nikola Tesla had recently invented a three-phase system of alternating current power transmission for the long distance  transfer of electricity. This allowed designers to light the temporary buildings of the exposition in Buffalo, using power generated 25 miles  away at Niagara Falls.  One of the key inventions displayed at the fair was the newly developed "X-ray" machine.

UNFORTUNATELY, for the city of Detroit, the Pan American Exposition will always be remembered as the place where President William McKinley was shot on September 6, 1901.  President McKinley had given an address there the previous day. The President died there, eight days later, as the result of his wounds.

Actually, the six US stamps (Sc. #294-99) issued at the time of the Pan American Exposition did not commemorate any event or anniversary.  They were issued to publicize the World's Fair event.  To get around the rule that the U.S. Post Office Department could not issue new postage stamps for advertising purposes, they added the phrase "Commemorative Series of 1901" to the top of the frame on each of the new postage stamps.

The Pan American Exposition set, described below, was issued on May 1, 1901.  These six US stamps were engraved by the US Bureau of Engraving and Printing on double-lined USPS watermarked paper, and they are all perforated 12.

In 1901, multi-color printing was still primitive, and the process, based on contemporary technology, was very, very difficult.  These bi-colored stamps were each printed in a two step process.  First the black vignettes were printed on the paper sheet.  Then, the sheet was placed, and hopefully properly aligned, on another plate, where the colored frame images were printed around the black vignettes.  Some misalignment was to be expected, with the vignette images being too high, too low, too far left, or two far right, when the colored frames were printed over them.

Stamps with horizontal or vertical misalignment of the vignettes are actually abundant, and they can make an impressive addition to a specialized collection of the Pan American Exposition stamps.

And then, what if someone placed the paper with the vignettes printed on it onto the press for the printed frames upside-down?  The vignettes would appear inverted in relation to the colored frame designs.  That's what happened, as shown in the scan above.  Normally, these would be detected by the quality control people at the Bureau of Engraving and Printing, and the badly printed sheets would have been destroyed.  But, some of them did make their way to post offices and were sold to the public.  These three "inverted center" stamp denominations (Sc. #294a-96a) are among the greatest of 20th Century rarities today.  The three US stamps, if purchased together, have a 2018 Scott Catalog value of $153,000.00, FAR beyond the means of most collectors!