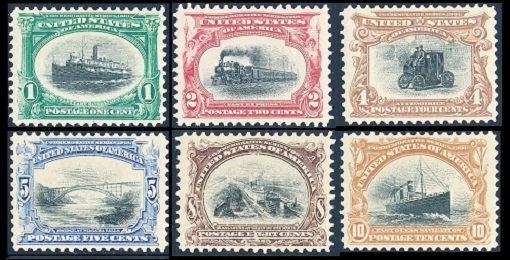 For present day collectors, this is great news.  The stamps of the United States, issued in the early part of the 20th Century, are FAR LESS expensive than their 19th Century counterparts.

The first set of "modern" commemorative stamps issued by the Bureau of Engraving and Printing at the beginning of the 20th Century is shown at the top of this page.  These six stamps were issued for the Pan American Exposition in 1901.  These stamps are over one hundred years old.  If one doesn't mind mint examples that are lightly hinged, with F-VF centering, a mint set may be purchased today for under $250.00.  A pretty set of used condition examples can be purchased for under $100.00.  Considering what my used condition Columbian and Trans-Mississippi sets cost me, that's an astronomical bargain!

20th Century stamps of the United States offer many exciting specialty areas.  The Second Bureau Issue definitives of 1902 are some of the most attractive definitive stamps every issued.  The Third Bureau Issues of 1908-1922 (the so-called Washington-Franklin issues) are, in themselves, an exciting specialty area.  The Washington-Franklin definitive stamps, with their many varieties, are considered very complex by some collectors.  They are actually very straightforward and easy to collect, if one proceeds in the right way with them.

The early 20th Century also saw the advent of airmail.  Many collections are formed based solely on airmail stamps and the history of aviation.  Even the scarce stamps issued for the flights of the German airship Graff Zeppelin are not beyond the financial capabilities of most dedicated US stamp collectors.

During the early 20th Century, stamps to commemorate special events increased in frequency, whereas definitive stamp series were less frequently replaced, with new definitive stamp denominations being released only as the result of rate changes.  Some of our most beautiful commemorative stamps were issued in the early 20th Century, and most of them are not terribly expensive.  Because of the popularity of the hobby, many of the commemorative US stamps of the middle and late 20th Century were issued in vast quantities.  As a result, one can buy many of them at face value from dealers at stamp shows, even today, 75 or more years after they were issued.  This all means that modern stamp collectors can spend more time studying and enjoying their stamps and spend much less time worrying about how much they cost!

Links to future page articles on this popular era of stamp collecting will eventually be provided in the column at the right.

The three Pan American Exposition stamps shown above, excepting their advanced printing technology and the "2001" date at the lower left corner of each stamp, are identical to the famous inverted center errors of 1901.  These were part of a souvenir sheet (Scott # 3505) issued on May 29, 2001 to commemorate the 100th Anniversary of the Pan American Exposition Invert Stamps.

If the collector looks around a bit, mint NH examples of these three US stamps, if purchased individually, will set their budget back by about $3.00!

Got an Inverted Jenny?

Obviously, one of the printers at the Bureau of Engraving and Printing in 1918 wasn't very careful.  What happened here?  After printing a Flat Plate Press sheet with the carmine frames, the printer then took the sheet to the press meant to print the blue vignettes, and without noticing, placed the sheet with the frames on the vignette press facing the wrong direction!  This press sheet of 400 stamps would have then been perforated, cut into panes of 100 stamps, then placed with the other 24 Cent airmail stamps printed during the day for shipment to post offices.  Only one pane of 100 stamps ever reached the public, therefore, the other three panes must have been discovered by the quality control people at the Bureau and destroyed.

On May 14, 1918, a stamp collector purchased the pane of airmail stamps with the inverted centers at the Washington, D.C. post office.  He must have been very excited and a very dedicated collector, as the cost of the pane was $24.00, which in 1918 was a small fortune .... the equivalent of a $20.00 Gold coin and a $5.00 Gold coin (or about 1.2 oz. of Gold).  The sheet was eventually broken up, and today, there are only a few of the original 100 error stamps in existence.

The original US stamp, shown above on the left, if one could be located for sale, would set the collector's budget back by a little over a HALF MILLION DOLLARS.

The stamp shown above on the right is from a souvenir sheet (Scott # 4806) issued on September 20, 2013 to celebrate this famous error stamp.  The 2013 stamp shown on the right wouldn't "fool" anyone.  But at least they got the vignette going the wrong direction! How else could anyone afford to add a mint NH example of the Inverted Jenny to their collection for about $5.00.


Return to Home Page from Modern US Stamps