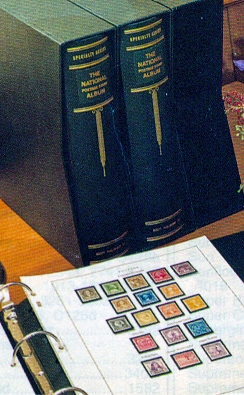 The most comprehensive of US Stamp Albums is the Scott National Album. This album is for the collector that is "serious" about completing a U.S. stamp collection, and it has spaces for just about every major variety listed in the Scott Specialized Catalog of United States Stamps, including the Postmaster's Provisionals and Special Printings. The binders and pages are sold separately.

Pages for Revenues and Envelope Cut Squares are available through various sellers on the Internet at additional cost. 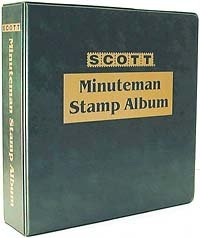 For an entry level collector, or for someone that doesn't require something as fancy or comprehensive as the National US Stamp Album, an excellent alternative is the Scott Minuteman US Stamp Album. This is a SERIOUS stamp album, with spaces for most every major variety of U.S. stamp, with the exception of the Postmaster's Provisionals, Special Printings, etc. This album also features historical information below each stamp space, which makes it a history book, as well as a first class U.S. stamp album. The album pages, with two three-ring binders, retail for around $100. 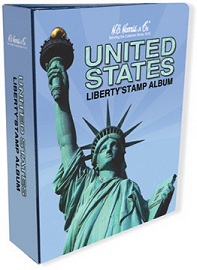 Another excellent US Stamp Album is the Harris Liberty Album. This is another very nice album, on par with the Scott Minuteman. Like the Minuteman, the Liberty U.S. Stamp Album includes historical information below each stamp space. The album pages come in two two-post binders and the complete kit retails for about $90.

The Scott and Harris US Stamp Albums are by far the most widely used among US stamp collectors. There are other, less expensive, albums available, but they are geared more towards the beginning collector. You can find them all on the Internet.

If you don't mind a previously used album, you can occasionally find a cheap US collection that comes with one of these albums at auction or online on eBay. It may not be up-to-date, but you can get a nice album and maybe even some stamps this way for just a few dollars.

The affiliated eBay seller auction and store lots provided by eBay, Inc. are not the responsibility of the management of this website.