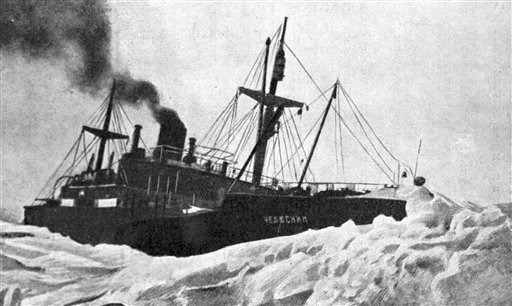 The commemorative airmail USSR stamps of 1935 to 1937 feature a famous air-rescue, a famous first flight, and an aviation exhibition.

A sea-going expedition during late 1933 and early 1934 was launched to determine the possibility of commercial travel by a non-icebreaker from Murmansk, on the Arctic Ocean, to Vladivostok, on the Pacific Ocean.

The Soviet commercial steamship "Chelyuskin" left Murmansk, along with a crew of 111, on August 2, 1933.  It became trapped in an Arctic ice field during September 1933, and it began to drift along with the ice.  The relentless Arctic ice pack eventually crushed the hull of the steamship, near the Bering Strait, and it sank on February 13, 1934.

Future voyages would be successful in completing the trip over what is called the Northern Sea Route, but this one ended badly.  This incident did result in triggering an international air-rescue operation of epic proportions. 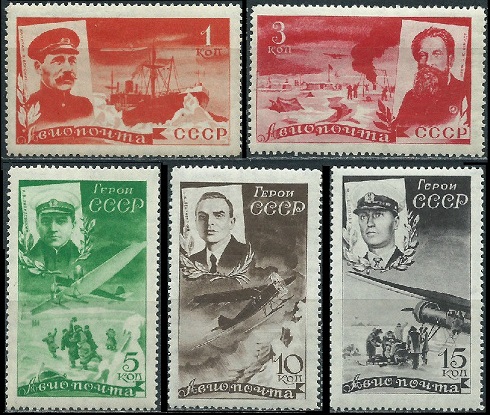 The ten pictorial USSR stamps shown above were issued on January 25, 1935 to commemorate the Aerial Rescue of the Steamship Chelyuskin Crew, during the Winter of 1933-1934.

The designs of these airmail USSR stamps feature important people of the aerial rescue operation.  Most of the stamps feature photographs of the pilots, along with the inscription "ГЕРОИ CCCP" or "Hero of the USSR", indicating the highest order for bravery in the USSR that was awarded to them.

In reading the overprint on the following stamp, I'm sure that all my Russian stamp collecting visitors have been studying their Cyrillic Alphabet and know exactly what this word is ..... Сан Франциско ..... San Francisco! 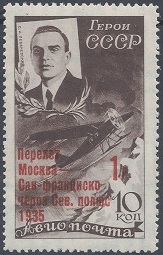 The 10 K. airmail USSR stamp shown above was overprinted and surcharged on August 3, 1935, for the Moscow to San Francisco flight attempt.

The flight crew of Sigizmund A. Levanevsky (1902-1937), Georgy Baydukov (1907-1996), and Victor Levchenko (1906-1937) took off from Moscow in a Tupolev ANT-25 aircraft.  Their flight path was to proceed northward, over the North Pole, and to fly down the Western Coast of the United States to San Francisco.  The flight was aborted, due to an engine problem, and they made an emergency landing near Novgorod, USSR, after flying a distance of only 1,200 miles.

Two of the rarest USSR stamps are shown above.  The overprint and surcharge are inverted, and the stamps show with both sizes of the "Ф" in the inscription. 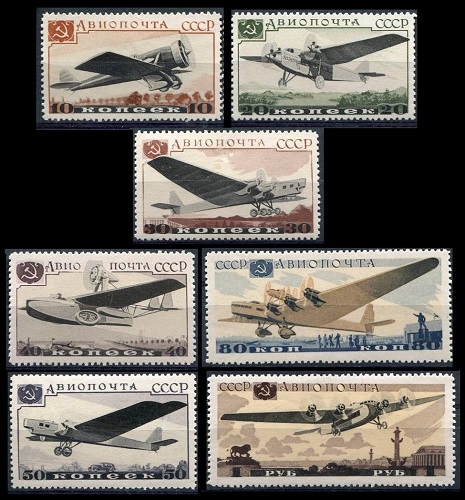 The seven airmail USSR stamps shown above were issued on November 15, 1937 to publicize the Jubilee Aviation Exhibition, held in Moscow, November 15-20, 1937.

Vertical pairs, imperforate between, exist of the 30 K., 40 K., and 50 K. denominations.  They are expensive and seldom seen in the philatelic marketplace. 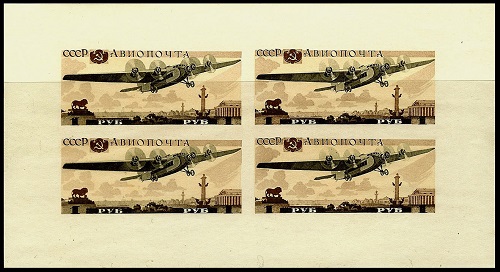 The imperforate USSR souvenir sheet shown above (Sc. #C75a) was issued on November 15, 1937 for the Jubilee Aviation Exhibition.