In 1932 and 1933, free enterprise may have been stifled a bit under the Communist system of government in the USSR, but PHILATELY was very much alive and doing very well! 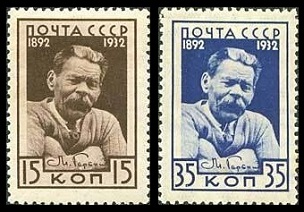 The two commemorative USSR stamps shown above were issued in 1932 to celebrate the 40th Anniversary of Maxim Gorky's Literary Activity.

The common design features a portrait of Maxim Gorky and his signature.

Living in exile, Maxim Gorky returned to the USSR from Fascist Italy in 1932, at the personal invitation of Josef Stalin (1878-1953).  Upon his return to the USSR, he was given two residences, a mansion in Moscow and a dacha in the country.  His Moscow home is now a museum. 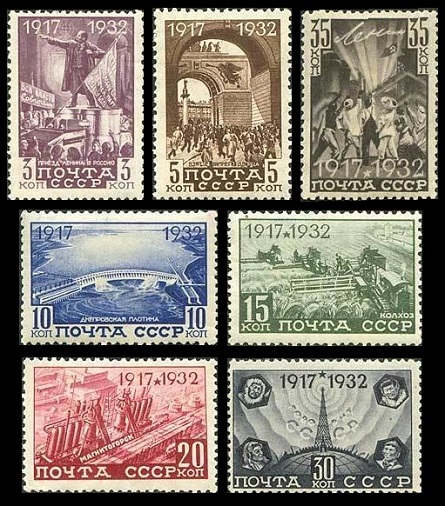 The seven pictorial USSR stamps shown above were issued in 1932 to commemorate the 15th Anniversary of the October Revolution.

The catalog attributes and design descriptions are as follows: 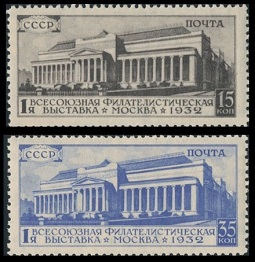 The stamps were sold for three times their face value, to cover the costs of the exhibition. 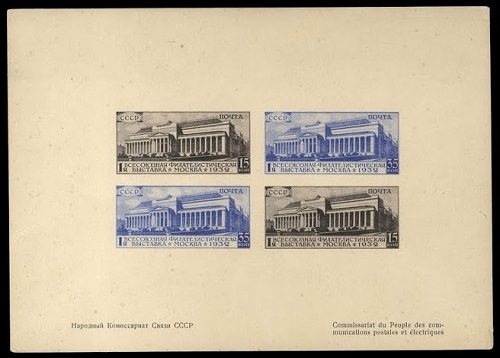 The souvenir card shown above is actually an invitation to the First All-Union Philatelic Exhibition, the first philatelic exhibition of the USSR.

The bottom of the card is inscribed "People's Commissariat of Communications of the USSR", in both Russian and French.

Twenty-five of the cards were overprinted with the names of individual participants and awarded to them for their contributions to the exhibition.  One of these cards was auctioned in 2008 for $776,250.00. 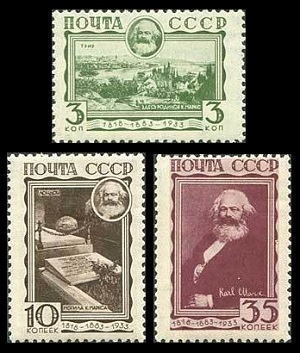 The three pictorial USSR stamps shown above were issued in March 1933 to commemorate the 50th Anniversary of the Death of Karl Marx (1818-1883).

The catalog attributes and design descriptions are as follows: 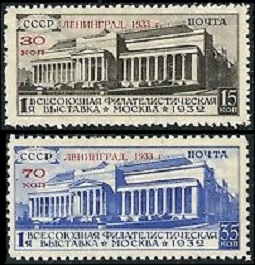 
Return to Russian Stamps from
USSR Stamps - Commemoratives of 1932-1933 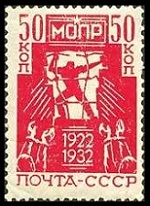 The pictorial USSR stamp shown above (Sc. #479) was issued on November 5, 1932 to celebrate the 10th Anniversary of the International Red (Revolutionaries) Aid Association.

The design shows an allegorical representation of a Worker Liberating the Prisoners of Capitalism.