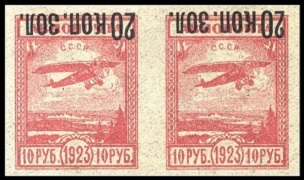 Airmail Stamp of 1923 with Inverted Surcharge

The first airmail USSR stamps were issued in November 1922, at the time the RSFSR was transitioning into the USSR.

The RSFSR October Revolution commemorative stamp, shown above, was overprinted with a red airplane on November 8, 1922.  These first airmail stamps were only sold at the Moscow General Post Office.

Only 100,000 of these airmail stamps were produced, and the ones that have survived are probably only a tiny fraction of that number. 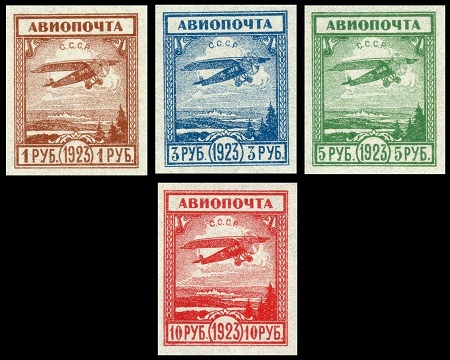 The four pictorial airmail USSR stamps shown above were prepared in August 1923, but they were never placed into use.

The common design of these attractive airmail stamps features a Fokker F-111 in flight. 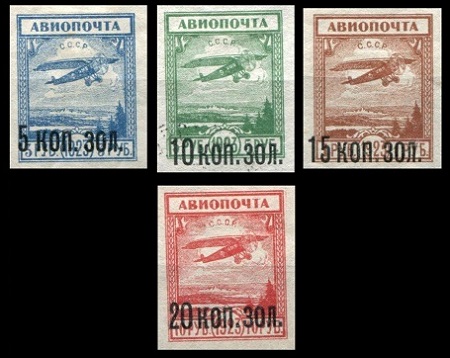 The four pictorial airmail USSR stamps of 1923, shown above, were overprinted and surcharged in Kopecks on May 5, 1924.  These were actually the first airmail stamps of the Soviet Union to have regular usage.

The two pictorial airmail USSR stamps shown above were issued on September 1, 1927 to publicize the First International Air Post Congress at The Hague, which was initiated by the Soviet Union.  The stamps are lithographed, and they are perforated 13 x 12.

The common design features a biplane over a map of the World.

The two pictorial airmail USSR stamps shown above were issued on September 10, 1930 to celebrate the round trip flight of the Graf Zeppelin from Friedrichshaven to Moscow.  The stamps are printed on paper that is watermarked diamonds, enclosing four dots - WMK 226.

The common design features the Graf Zeppelin and a depiction of the "Call to Complete the Five-Year Plan in Four Years".

The Airship Graf Zeppelin made a special round trip flight from Friedrichshafen to Moscow on September 9-10, 1930.  The airship landed briefly, where it was greeted by approximately 100,000 people.  These stamps were issued especially to pay the international airmail rate on the return flight to Friedrichshaven.

The catalog attributes, for stamps that are perforated 12 1/2, are as follows:

The catalog attributes, for stamps that are perforated 10 1/2, are as follows:

The catalog attributes, for stamps that are imperforate, are as follows: