This page features the US revenue stamps issued for the purpose of collecting the federal taxes on tobacco and tobacco-related products.

The cigarette tubes stamps were issued to collect the federal tax on hollow tubes of cigarette paper.  These were sold in packages, to enable buyers to add loose tobacco to make their own cigarettes.

Beginning in 1919, One Cent denomination Documentary stamps were overprinted "CIGTTE. / TUBES" for use on retail packages of Himyar Tobacco cigarette tubes, manufactured by the Axton-Fisher Tobacco Co..  There were two printings of these stamps, differing in the perforation gauge, between 1919 and 1929.

The 1919 printing exists without a period after "CIGTTE".  This variety is valued at about twenty times that of the normal overprint.

The two Cigarette Tubes stamps shown above were issued in 1933.  They are both perforated 11.  The new designs feature a denomination numeral, with cigarette tubes at each side.

Tobacco Sale Tax stamps were issued to pay the tax on the sale of tobacco, in excess of the quotas set by the Department of Agriculture.  The tax was 25% of the price for which the excess tobacco was sold. 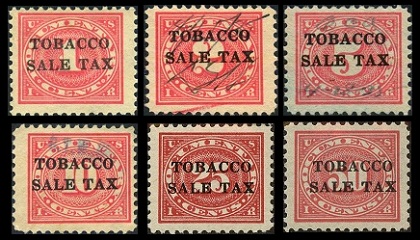 The six Documentary stamps (Issue of 1917) shown above were overprinted "TOBACCO / SALE TAX" in 1934.

The 10 C. denomination exists with the overprint inverted.  It is not scarce and is relatively inexpensive.  Inverted overprints on the 2 C. denomination do not exist ... they are forgeries.

The use of Tobacco Sale Tax US revenue stamps was discontinued on December 1, 1935, when the US Supreme Court ruled that the Agricultural Adjustment Act of 1934 was unconstitutional.


Return to US Revenue Stamps from
Tobacco Tax Stamps

An un-opened package of Himyar Tobacco cigarette tubes, with Sc. #RH1 affixed to the back flap, is shown above.