Potato tax US revenue stamps were required by the Potato Act of 1935, an amendment to the Agricultural Adjustment Act that became effective December 1, 1935.

Farmers that exceeded their federally established quotas were required to pay potato tax on the excess volume with the tax paid stamps.  The tax amounted to 3/4 C. per pound of potatoes. 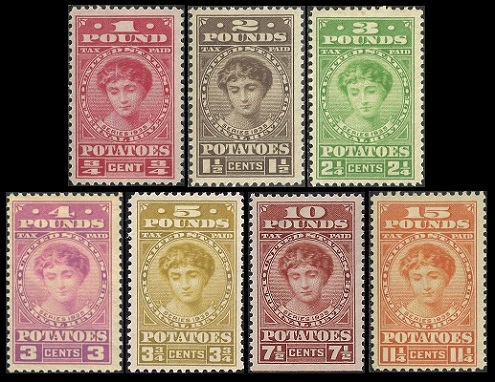 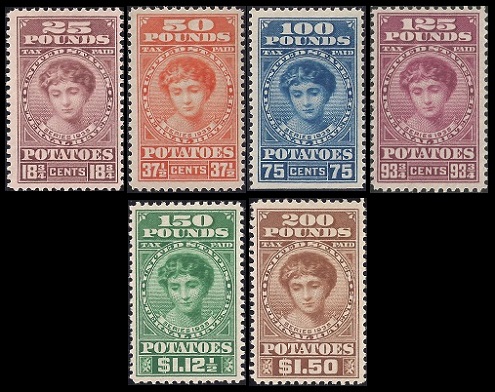 The thirteen (tax paid) potato tax US revenue stamps shown above were issued in 1935.  The stamps are inscribed in pounds (of potatoes) at the top and in dollars / cents (tax amount) at the bottom.  The design of these beautiful revenue stamps features a contemporary young woman.

These stamps were available and valid for such a short period of time (about two months) that they were never actually put into use.  However, many stamp collectors and dealers bought mint condition sets of them, and even today, these stamps are quite affordable.

Farmers were to be given federally established excess quota allotments, for which they were provided with tax exempt stamps.

The 2 Lb. and 50 Lb. stamps exist used, but they are very scarce.  The other stamps are only available in mint condition.

The 25 Lb. stamp in this series only exists as three unbroken booklet panes of twelve, and they are not available in the philatelic marketplace.

On January 6, 1936, the US Supreme Court declared the Agricultural Adjustment Act unconstitutional, and the act was repealed on February 10, 1936.


Return to US Revenue Stamps from
Potato Tax Stamps of 1935