Federal beer tax US revenue stamps first appeared in 1866.  No stamps were produced between 1919 and 1932, during the Prohibition Era in the United States.  Production of federal beer tax stamps was resumed in 1933 and discontinued in 1951.

Beer tax stamps were provided to brewers in imperforate sheets.  After filling the barrel, the brewer would then cut out the appropriate stamp for the particular sized barrel being shipped to the consumer.  The stamp was to be placed over the bung (stopper or cork) of the barrel and then canceled.  When the barrel was opened by the consumer, the stamp would usually be punched-through or otherwise mutilated, with the end-result being the prevention of the stamp's reuse.

Quite a few of these stamps must have been more carefully removed though, as many undamaged, very nicely canceled examples are available in the philatelic marketplace. 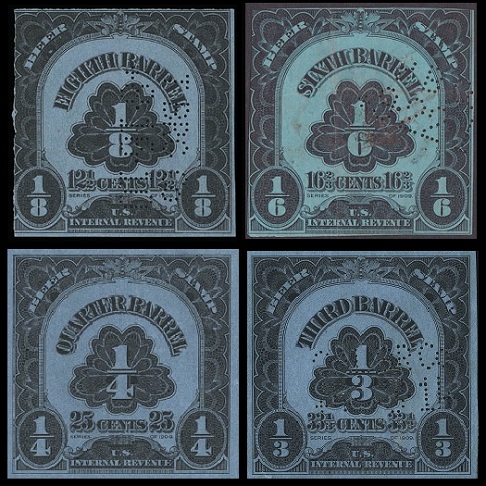 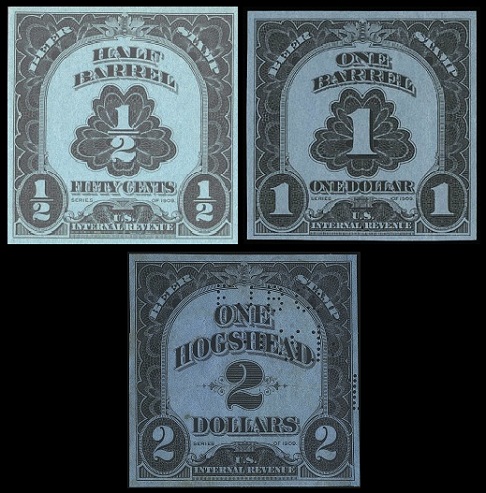 A new series of beer tax US revenue stamps was introduced, beginning in 1909.  These US revenue stamps were printed on Blue paper of varying shades, and they are all inscribed "SERIES OF 1909".  All of the (black) major denomination types are shown above.

The central design of these stamps features a large denomination numeral, with the text barrel-measurement above, and the text stamp denomination below.

There are three high denominations of the Series of 1909, as shown above, however, they were not issued as full sized stamps.  They only exist as cut-outs of the denomination numeral in the center of the stamps. 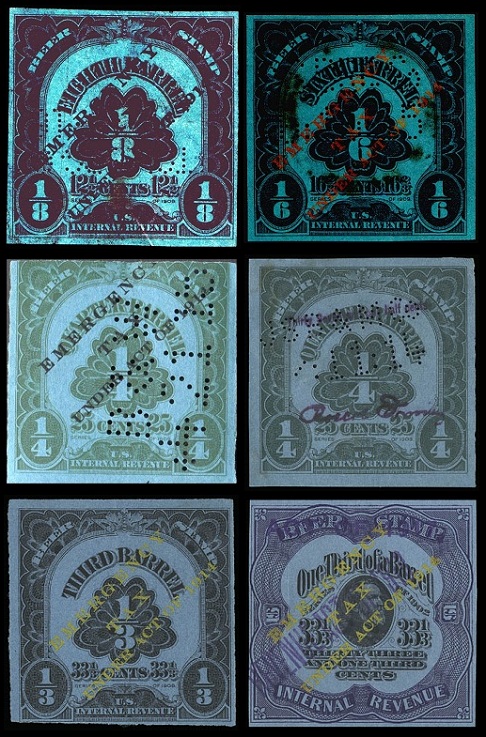 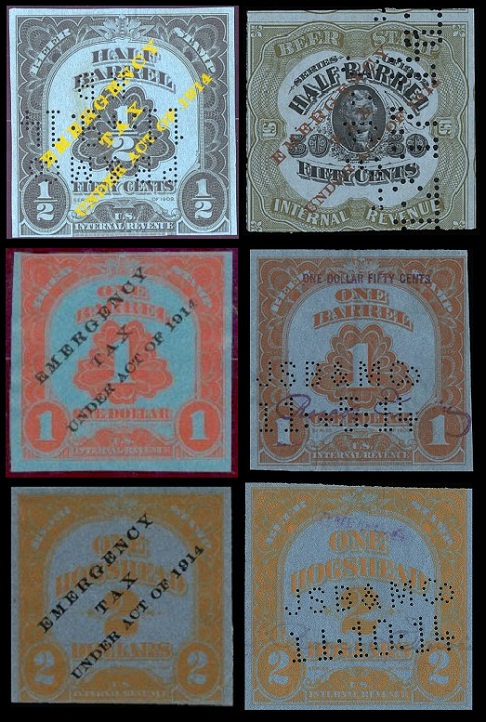 The major-type beer tax US revenue stamps of 1902-1911 were provisionally surcharged in 1914.  The tax rate was increased to $1.50 per barrel.  All of the major Scott catalog listed surcharges are shown in the images above.

There were two major types of the surcharges: 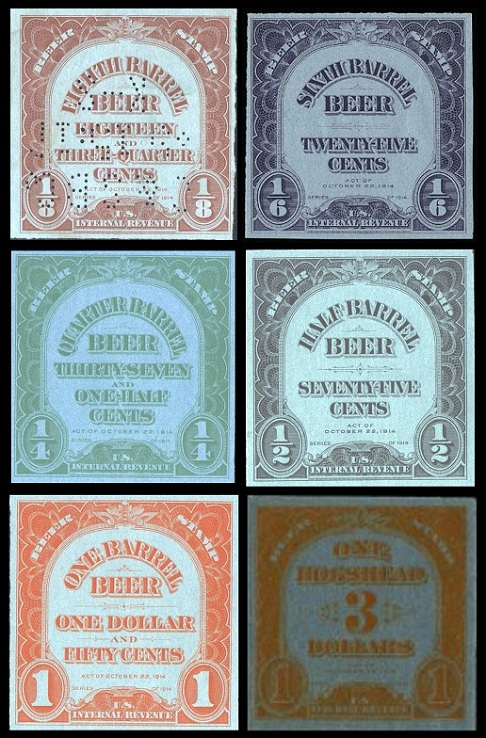 A new series of beer tax US revenue stamps was introduced in 1914.  These US revenue stamps were printed on Blue paper of varying shades, and they are all inscribed "SERIES OF 1914".  All of them, except for the very rare 50 C. denomination and the cut-out-center high-denominations, are shown above.

The central design of these stamps, except for the $3.00 denomination, features  the text barrel-measurement above, BEER in the middle, and the text stamp denomination at the bottom.

The two horizontal-format beer tax US revenue stamps shown above were introduced in 1916.  These US revenue stamps were printed on Greenish Blue paper of varying shades, and they are all inscribed "SERIES OF 1916".

These stamps feature the words "FERMENTED LIQUOR", instead of "BEER".

The definitive reference book on beer tax US revenue stamps is "United States Beer Stamps", by Thomas W. Priester.  This reference book, along with the Scott Specialized Catalog of United States Stamps, is an absolute necessity for anyone wishing to specialize in US beer stamps.