Proprietary US revenue stamps were first introduced in 1871, when the First Issue of 1862-1871 was retired.

The successors of the First Issue became "U.S. Internal Revenue" stamps, and they would eventually evolve into what would become "Documentary" stamps.  The Documentary stamps were only valid on taxable paper document transactions.

This necessitated the issue of new proprietary US stamps, designed for use on taxable proprietary (consumer) products.  Some of these products, at the time, were matches, playing cards, cosmetics, medicines, liquor, etc. 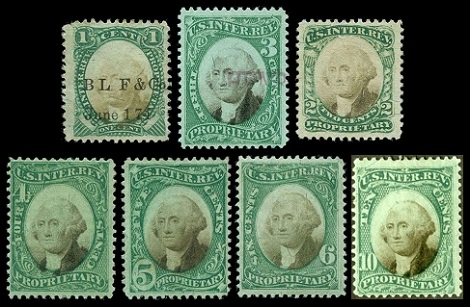 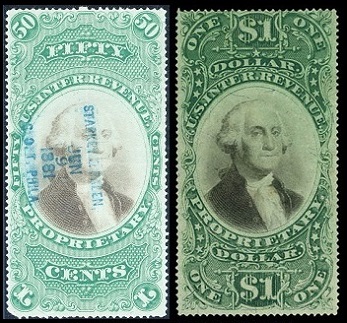 The nine proprietary stamps shown above were issued between 1871 and 1874.  All of these stamps are engraved and perforated 12.

These stamps were produced with two different paper types:

The green paper stamps are the scarcer of the two types.

The catalog description details are as follows: 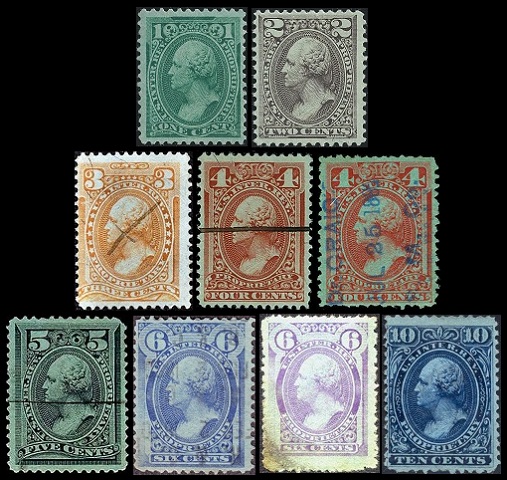 The nine proprietary stamps shown above were issued between 1875 and 1881.  These stamps were produced in different colors, to alleviate the confusion caused by the previous issue being printed with all the denominations having the same color.

These stamps were produced with three different paper / separation types:

The catalog description details are as follows:

During the 1875-1881 period these proprietary US revenue stamps were engraved and produced by the Bureau of Engraving and Printing, the National Banknote Co., and the American Banknote Co.  As a result, the appearance and quality of these issues can vary tremendously from stamp to stamp.


Return to US Revenue Stamps from
Proprietary Stamps of 1871-1881 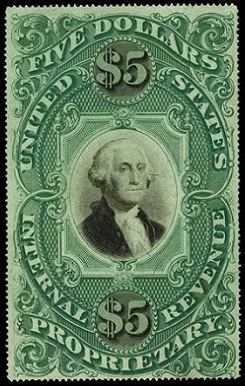 The Five Dollar denomination Proprietary stamp shown above (Sc. #RB10a, #RB10b) was issued in 1873.  By size, it is the largest US revenue stamp.