For US revenue stamps, 1898 was a transitional year, brought on by the advent of the Spanish American War.  The new series of Documentary revenue stamps was not yet available, and lower denomination revenue stamps were needed, as supplies of them were running short.  The situation necessitated the provisional overprinting of US definitive postage stamps, in order to fill the urgent need for revenue stamps.

The three definitive postage stamps shown above were overprinted by the Department of Internal Revenue in 1898 for use as US revenue stamps.

The 2 C. denomination stamp has the second overprint type.  The over print was applied to both the Type III and Type IV postage stamps.

These three government produced provisional revenue stamps are very common and inexpensive.  Even examples with inverted overprints are available for not too much more than the price of the regularly issued stamps.

The three definitive postage stamps shown above were privately  hand-stamped by the Michigan Mutual Life Insurance Co. over a five day period during July 1898.

These hand-stamped emergency provisional US revenue stamps are exceedingly rare, and they should only be purchased with a certificate of authenticity.

The three images shown above are from a 2015 Daniel F. Kelleher auction, where the three stamps sold for a combined total of $9,000.

Most collectors of US revenue stamps will NEVER EVEN SEE the two Trans-Mississippi 1 C. denomination provisional overprints shown above, much less ever own either of them.  BUT, they ARE listed in the Scott Specialized Catalog of United States stamps.

These two provisional revenue stamps were overprinted, with government permission, by the Purvis Printing Co. during 1898.

Unfortunately, very few of the 500 overprinted stamps that were ordered have survived.  As of 2015, only 19 stamps with the L. H. C. overprint, and 3 stamps with the P. I. D. & Son overprint have been recorded. 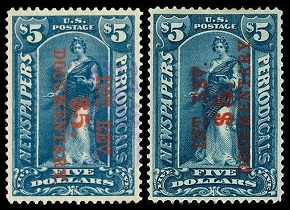 Five Dollar denomination Newspaper and Periodical stamps were overprinted and surcharged "INT. REV. / $5. / DOCUMENTARY" in red during 1898.  These were the first issue of what would become U.S. Documentary stamps.  Both overprint orientations are shown above.

Though a bit pricey, these stamps are abundant, in both mint and used condition, in the philatelic marketplace.


Return to US Revenue Stamps from
Provisional Revenues of 1898