US Classic Stamps offer endless possibilities for the philatelic study of early postmarks. One of the most popular areas is in the study of the fancy cancellations of the New York Foreign Mail (NYFM) Office, used between 1870 and 1880.

During the late 19th Century, and into the early part of the 20th Century, it was against postal regulations to use a town / date postmark over on top of the stamps affixed to an envelope. The postmark could appear elsewhere on the envelope, but the postage stamp had to be canceled with an obliterating type of device, usually a cork or rubber device, referred to as a "killer".

Some postmasters and clerks in the 19th Century, carved fancy designs into cork or rubber, to use in canceling the stamps. Some of these designs were crude, just smudges, but others were beautiful geometric designs.

In 1870, the New York Foreign Mail Office began using some of these fancy cancel designs on outgoing international mail. This sets them apart from any other fancy cancels used by any other US city, as the mail to foreign destinations generally used the higher denominations of the current postage stamps, from the 6 Cent through the 90 cent. In all, over 200 designs of these cancels exist.

All postmark collections are composed of whatever the collector deems appropriate, based on their goals and pocketbooks. A nice representative collection can be made of each type of cancel, for a moderate cost. Or the collector can try to get as many different cancel types on as many different issues of the period that they can. And then there are covers, but covers with these stamps and cancellations can get very expensive.

When I collected the stamps shown in this "gallery" back in the 1980's and 1990's, I tried to get as many cancels as I could, on each issue and each denomination of the Banknote Series (1870-1890). Of course, the stamps were much cheaper then. It may have been over-kill, but I almost never passed up on a well struck, pretty cancel, when I found one, even though I might have had multiple copies of that particular stamp with the particular NYFM cancel.

This continuation of my GALLERY, below, and in Part 1, shows images of most of the NYFM cancels that I was able to collect. Please enjoy them! 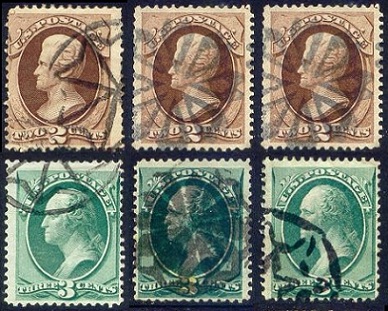 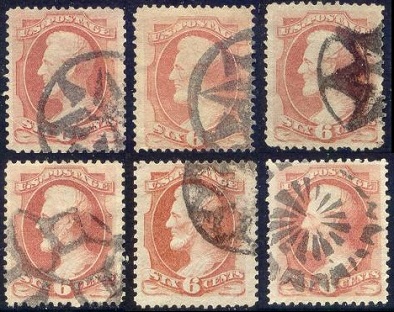 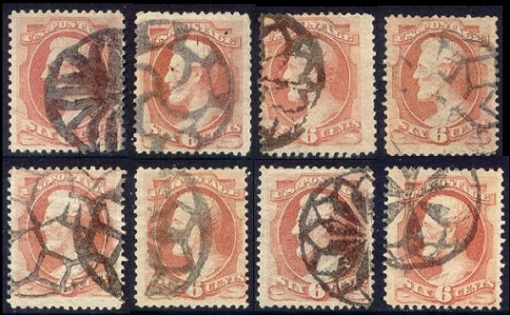 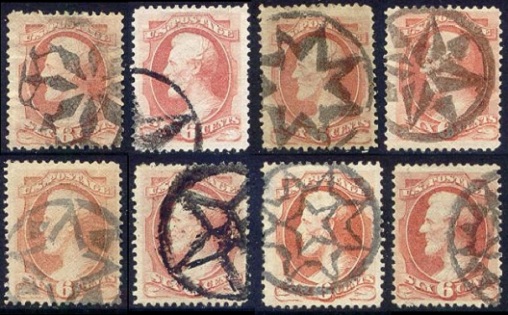 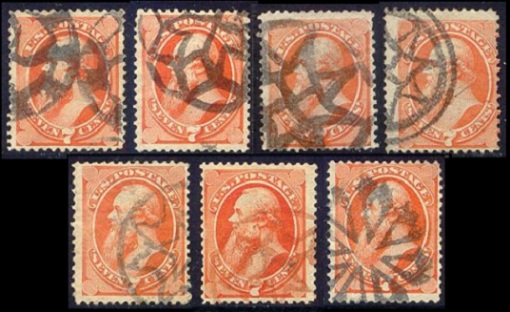 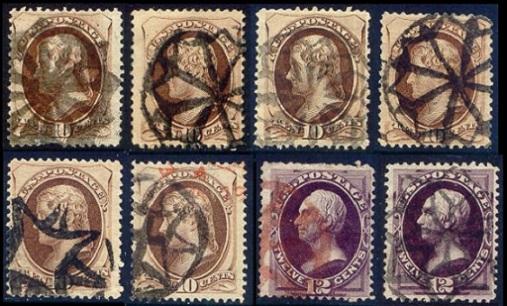 There is an excellent US Classic Stamps site, I found on the web, that has a beautiful exhibit, including covers, of the NYFM cancels. The link is in the first section below. The exhibit is also downloadable from the site, as a PDF file.

For the serious philatelist, the best source of information is The Foreign Mail Cancellations of New York City 1870-1878, by William R. Weiss, Jr. This book is an in-depth study of the US classic stamps period of fancy cancels from New York City. I used to have this book, and I got constant use out of it, as it shows large drawings of each of the cancellation types. It was last published in 1990, but now it is out of print, and copies are very hard to locate. It may be found through philatelic book sellers or sometimes on eBay, and the prices can range from $75 and up, for a nice copy of the book.