1894 was a transitional year for US Classic Stamps.

The US Bureau of Engraving and Printing took over the sole responsibility for printing US postage stamps, bringing to an end the era of our stamps being produced by commercial banknote companies.  With very few exceptions, the Bureau of Engraving and Printing would continue the production of US stamps for the rest of the 19th Century and for most of the 20th Century.  Philatelically, the US classic stamp issues of 1894 through 1900 are known as the "First Bureau Issue".

In 1894, and continuing through 1900, a brand new series of definitive US classic stamps was implemented.  They are all addressed in this web page.  The new US classic stamp designs are very similar to the American Banknote Company issues of 1890, with the exception of the addition of triangular ornaments to the upper corners, the elimination of two of the old denominations, and the addition of four new denominations.

For the collectors that are not very familiar with the First Bureau Issue, the presentation of all the different variations and varieties in this article may lend itself to a bit of confusion.  Thus, I have created description tables for each of the issues with the Scott Catalog numbers  for each of these US classic stamps.  In this manner the chronology of all these different stamps may be better understood.

The new US classic stamps issued in 1894 were all engraved on white, unwatermarked paper, and they were all perforated 12.  All of them are shown in the scans directly below.  The accompanying table describes the denomination, person depicted, Scott Catalog number, issued color, and other known colors / shades. 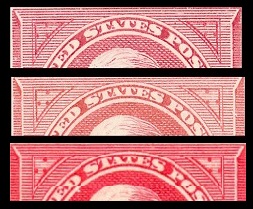 The two cent denomination stamps come in three different types, having to do with shading differences in the triangular ornaments in the upper corners.  The types are illustrated in the scan above, from top to bottom, and they are as follows:

The one dollar denomination stamps come in two different types, having to do with the circles around the denomination numeral.  The types are illustrated in the scan above, from top to bottom, and they are as follows:

The 15 left vertical rows of impressions from plate 76 are Type I, with the balance being Type II. 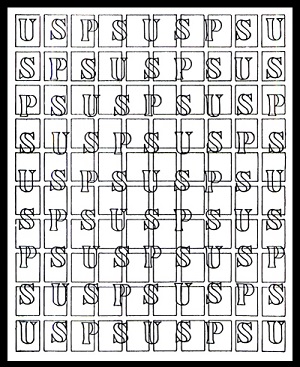 In 1895, for security reasons, the US Bureau of Engraving and Printing began using watermarked paper for the production of postage stamps.  Of course, this required reprinting the issues of 1894 on the new watermarked paper, thus creating a new set of definitive US classic stamps.

The new watermarked paper contained the initials USPS in double-lined capital letters.  USPS, at this time, was the abbreviation for "United States Postage Stamp".  The illustration here shows what the double-lined watermark looks like within a pane of 100 postage stamps.  The watermark letters are very large, almost the full size of a postage stamp, but they were not evenly aligned with each of the stamps.  Thus, a watermarked stamp, depending on its position in the pane, could have one letter, or it could have portions of two, three, or even four letters on it.

The double-lined watermarked US classic stamp issues of 1895 are identical to those issued in 1894, with the exception that some of the colors were either changed or abandoned.  For that reason, no scans of them will be provided here.  A description table for the new watermarked US classic  stamps, including the Scott Catalog numbers, is provided below.

For the collector wishing to save money by having only a denomination "type" set of the First Bureau Issue of US classic stamps, the 1895 watermarked set is FAR less expensive than the 1894 unwatermarked set, both in mint condition and in used condition.

In 1898, color changes were made to some of the lower values of the First Bureau Issue of US Classic stamps.  This was necessitated in order to comply with the rules of the Universal Postal Union mandating that the postal card and letter mail rate stamps of every country be the same color.  The printed colors of the 1 Cent and 2 Cent stamps were changed to comply with this rule.  This change, at the same time, resulted in color changes for several other denominations, in order to avoid confusion by postal clerks and postal customers with different denomination stamps that would be very similar in color.  They are all shown in the scan below.

As with the 1895 issues, these US classic stamps were all engraved on double-lined watermarked paper and were all perforated 12. 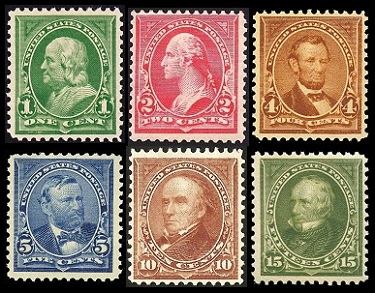 Type IV of the two cent denomination is similar to Type III, previously described.  However, many of the lines of the design have been re-cut.  Please see the Scott Catalog for details.

The two types of the 10 cent denomination are very similar to those described for the one dollar denomination.  For details, see the Scott Catalog.  The stamp shown in the scan above is Type I. 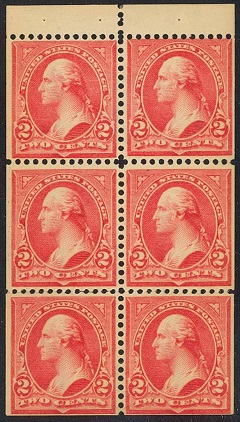 The booklet panes of six are very scarce, but they are not unreasonably priced for US classic stamps, being about $500.00 for a hinged example in the 2018 Scott Catalog.