Commemorative US classic stamps and US Commemorative coins were first issued in 1893 to mark the 400th Anniversary of the discovery of America in 1492 and to celebrate the opening of the World's Columbian Exposition (World's Fair) in Chicago. 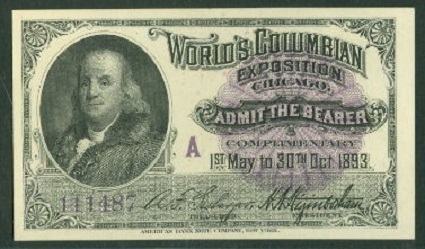 The World's Columbian Exposition, also known as The Chicago World's Fair, was held in Chicago in 1893 to celebrate the 400th anniversary of Christopher Columbus' arrival in the New World. The centerpiece of the Fair was the large water pool, representing the long voyage Columbus took to the New World. The fair had a profound effect on architecture, the arts, Chicago's self-image, and American industrial optimism, such as had been accomplished by the British Exhibition in 1851.

The exposition covered more than 600 acres, featuring nearly 200 (temporary) buildings of neoclassical architecture, canals, and lagoons.  There were international pavilions representing different countries, and representatives from 46 different countries participated in the fair.  Dedication ceremonies for the fair were held on October 21, 1892, but the fairgrounds were not actually opened to the public until May 1, 1893, continuing until October 30, 1893. Over 700,000 visitors attended the fair on its opening day.  During the six months the fair was open, it drew more than 27 million visitors.

For the year 1892, the 400th Anniversary of Columbus' arrival in the New World, began as a noteworthy numismatic event.

The half dollar coins were issued in sufficient quantities that they are still relatively common and affordable today.  The quarter dollar coins are very scarce.

The sixteen US classic stamps shown below (Sc. #230-45) were issued at the beginning of 1893 to commemorate the 400th Anniversary of the Discovery of the New World by Christopher Columbus.  These US classic stamps will each be described individually below.

These stamps were all engraved by the American Banknote Company on unwatermarked paper, and they are all perforated 12.

Varieties of the one cent denomination come with both a double transfer and with a cracked plate.  These varieties are worth just a little bit more than the regular stamps.

Varieties of the two cent denomination come with double, triple, and quadruple transfers, broken frame lines, recut frame lines, and cracked plate.  All of these are not unreasonably expensive.

A popular variety of the two cent denomination is known as the "Broken Hat" variety.  Damage to one transfer roll resulted in a chevron-shaped notch in the hat of the third man on Columbus' right on some copies of this stamp. This variety is relatively common and it is little more valuable than the regular stamp.

The 15 Cent denomination exists with a cracked plate.  It is rare and not priced in the Scott Catalog. 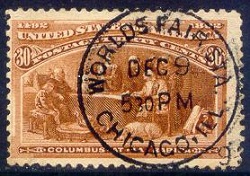 Shown above is an example of the 30 Cent denomination with a World's Fair Station circular date stamp.  Of special note for thematic collectors ... I was once told that this US classic stamps issue was the first stamp in the world that includes a DOG in its design.

Both these denominations exist with a double transfer.  They are rare and are not priced in the Scott Catalog.

The three dollar denomination was printed in two different colors, yellow green and olive green.  They are worth about the same.

The four dollar denomination was printed in both crimson lake and rose carmine.  The two colors are worth the same in the Scott Catalog.

The Columbian issues were the last to be produced by a commercial banknote company.

One would think that this new commemorative set of US classic stamps, with their historical vignettes, would have been very popular at the time.  This is NOT TRUE!  These US classic stamps sold well, but approval was NOT universal.

If the US Post Office Department had issued a set of 16 different two cent letter rate US classic stamps, with the different historical vignettes, it would have probably sold out very quickly.

Up until 1893, the highest denomination regular postage US classic stamps ever produced were the 90 cent denomination.  This set of 16 stamps ranged in denominations from the 1 Cent to the 5 Dollar.  A set of 16 individual stamps, in 1893, would have cost the postal customer $16.34, more disposable cash than most people would have had at the time.  In modern US dollars, this would be equivalent to about $390.00 for a single set of stamps.  As a result, very few of the high denomination stamps from this set were actually sold.

An organization called the Society for the Suppression of Speculative Stamps was created in protest over the creation of this set, deeming the Exposition in Chicago insufficiently important to be honored on postage stamps, while some collectors balked at the Post Office Department's willingness to profit from the growing hobby of philately.

Ridiculing the $5 stamp, the Chicago Tribune pointed out that it could be used for only one purpose: mailing a 62½-pound package of books at the book rate.

In fact, all the denominations above 10 Cents were, for the most part, useless for postal purposes.  As a result, covers of the lower values are common, whereas covers with the high values are almost non-existant, with most being "philatelically" created.

Today, the 1893 Columbian US classic stamp issues are very expensive.  They are not rare, not even scarce for the most part.  I recently did an eBay search for the dollar denomination Columbians .... there are 100's of them out there, both mint and used .... and eBay is only one of many auction and retail sites selling these stamps on the internet.

However, the Columbian US classic stamp issues are still one of the principal benchmarks for every collection of US Classic stamps, US Commemorative stamps, and even for many thematic stamp collections.

Used Examples of the High-Denomination Columbian Stamps
from the webmaster's former US collection. 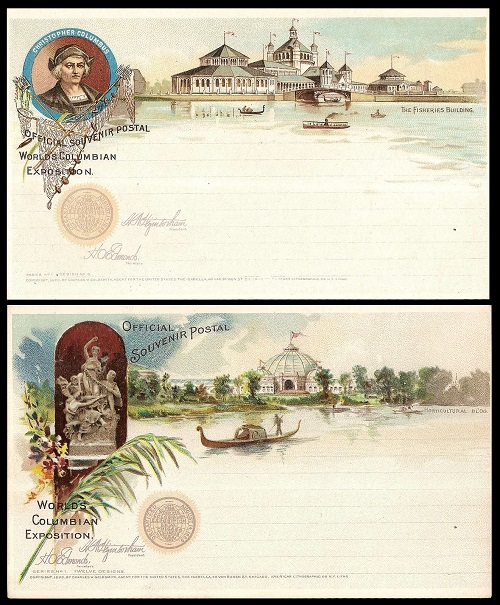 Shown above are two of the 12 different pictorial postal cards issued by the US Post Office Department and sold during the Columbian Exposition.

A set of four embossed - stamped envelopes was issued by the US Post Office Department in 1893 for the 400th anniversary of Columbus' discovery and for the World's Columbian Exhibition.  The designs depict the profiles of "Christopher Columbus" and of "Liberty".


Return to US Classic Stamps from
Commemoratives of 1893 - Columbian Exposition