The US classic stamps issued between 1870 and 1888 are known as the Banknote Issues to US philatelists. Over this time period, the printing of US stamps was contracted out to the National Banknote Co., the Continental Bank Note Co., and finally to the American Banknote Co.

These classic stamps are very popular issues with US philatelists. There are many printing and paper varieties, shades, the New York Foreign Mail cancellations of 1870-1880, and innumerable other fancy cancellation types to be found on these issues. The 3c denominations are the cheapest, and one can develop an impressive collection of fancy cancels, based on these issues, for only a modest investment.

The plate proofs of the 1870 National Banknote Co. issue are shown above. They all feature busts of prominent Americans, which are as follows: 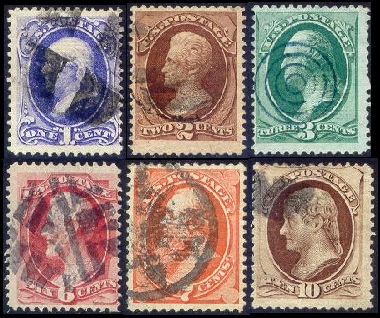 The US classic stamps, shown in the images above, were printed by the National Banknote Co., beginning in April 1870. These stamps were printed on hard, white wove paper of excellent quality, and they are perforated 12.

In keeping with the practice of the late 1860's, the paper of the first printings was impressed with "grills", in an attempt to prevent used examples of the stamps from being "cleaned" and then re-used.

The grills on these US classic stamps are usually very faint, sometimes with only a few grill points remaining, especially on the 10 Cent - 90 Cent denominations.

Later printings by the National Banknote Co., through the end of 1872, were all on paper without impressed grills. The complete used set, without grill, is shown above (Sc. #145-55).

The paper, printing characteristics, and perforations are the same as on the grilled issues.

In about July 1873, the Continental Banknote Co. took over the printing of the US classic stamps Banknote Issues. The stamps are printed on hard, white wove paper and are perforated 12, as were the National Banknote Co. issues (Sc. #156-166, #178-79).

The Continental Banknote Co. also used a vertically ribbed paper. The stamps printed on ribbed paper are worth much more than those printed on the regular wove paper. 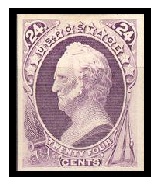 A "J Grill" of about 7 x 9 mm exists on all the US classic stamps Banknote Issue denominations, except the 24 Cent and 90 Cent. The grill was composed of truncated pyramids and was so strongly impressed that it often broke through the paper. They are all VERY RARE.

In 1875, the Continental Banknote Co. issued a new 2 Cent denomination, printed in vermilion, and a new 5 Cent denomination, printed in blue. The new 5 Cent stamp pictures a facing portrait of President Zachary Taylor. These stamps were printed on hard, yellowish, wove paper and are perforated 12. They are also shown in the images of the Continental Banknote Co. set above (Sc. #178-79). 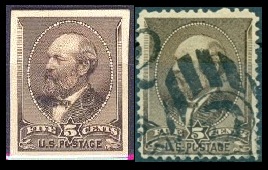 The stamps are printed on soft porous paper, almost like newsprint, and they are all perforated 12. These soft paper printings can be fragile. Mishandling can lead to creases and tears, and careless hinge removal will almost always result in a thin spot.


In 1882, the 5 Cent Zachary Taylor design was replaced by a new stamp, featuring the portrait of the recently assassinated President James A. Garfield. A plate proof and a used example are shown in the third image above (Sc. #205P4, #205). 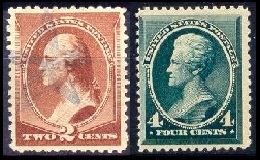 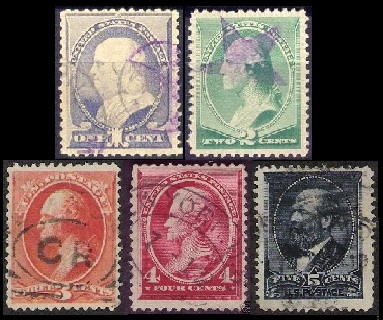 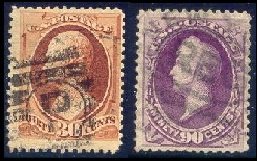 Between 1887 and 1888, the final US classic stamps of the Banknote Issue designs were released by the American Banknote Co. They are all shown in the images above (Sc. #212-18).